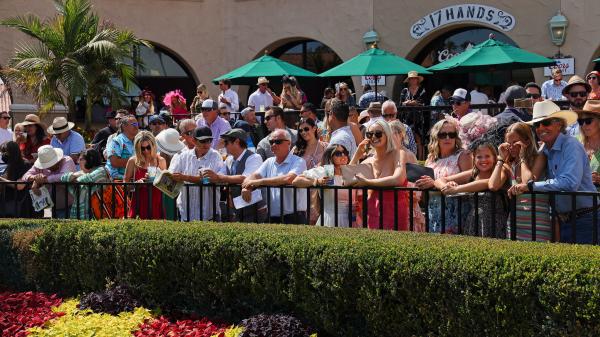 Making Money Betting the Trifecta in the Del Mar Futurity

The $300,00, Grade 1 Runhappy Del Mar Futurity has a rich history an important summer race for 2-year-olds that has served as a springboard for many budding stars, and the seven-furlong race has been especially significant in recent years. Since 2008, five Del Mar Futurity winners went on to take home the Eclipse Award as champion 2-year-old male: Midshipman (2008), Lookin At Lucky (2009), American Pharoah (2014), Nyquist (2015), and Game Winner (2018).

So, it’s no surprise that the 2022 edition set for Sept. 11, closing day at Del Mar, drew many of the top precocious West Coast-based 2-year-olds, led by a trio from the barn of Hall of Fame trainer Bob Baffert.

Havnameltdown (#8), winner of the $202,500, Grade 3 Best Pal Stakes Aug. 14 at Del Mar, is the most accomplished of the Baffert triumvirate … but not the fastest. That distinction using Equibase, Beyer, and Brisnet speed figures belongs to #7 Cave Rock, and by a significant margin according to Equibase Speed Figures and Beyer Speed Figures.

Cave Rock has raced only once but it was a memorable debut. The dark bay or brown colt from the first crop of champion Arrogate led from start to finish in a six-length romp going 6 ½ furlongs Aug. 13 on this main track at Del Mar. He earned a 109 Equibase Speed Figure, 101 Beyer Speed Figure, and 104 Brisnet speed rating. The Equibase figure was 16 points faster and the Beyer figure was 20 points faster than Havnameltdown – the next fastest horse on paper – earned in the Best Pal. The point being, Cave Rock is very fast and only needs to carry that speed another sixteenth of a mile on a track he clearly likes. He should be tough to beat.

Baffert’s third entrant #6 Newgate won his career debut July 30 at Del Mar by 3 ½ lengths in a visually impressive unveiling that made it seem like he had plenty in reserve. I think he could improve significantly in his second start.

I don’t expect there to be much value on Cave Rock in the win pool, so instead I’ll focus on the trifecta and use Newgate in second under Cave Rock while playing against Best Pal winner Havnameltdown. I’ll try to fill out the final spot in the trifecta with a price using two off-the-pace runners in Best Pal runner-up #2 Agency and Graduation Stakes winner #9 The Big Wam for third.

Strategy on a $20 Budget