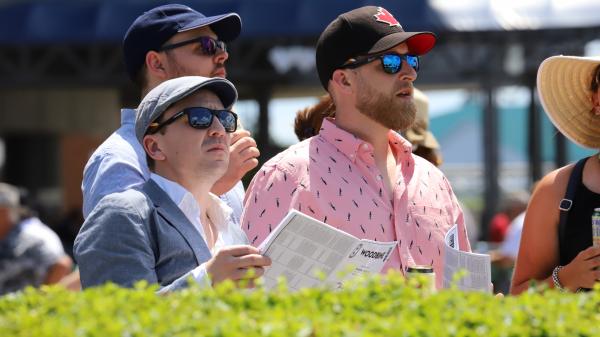 Saturday’s $500,000, Grade 1 Johnnie Walker Natalma Stakes at Woodbine isn’t North America’s oldest top-level prize by any means; it first achieved Grade 1 status in 2016. But the Natalma’s rising ranking is well deserved, and so is its status as a “Win and You’re In” qualifier for the Grade 1 Breeders’ Cup Juvenile Fillies Turf.

Since 2010, three fillies (More Than Real, Catch a Glimpse, and Pizza Bianca) have used the Natalma as a steppingstone to victory in the Breeders’ Cup Juvenile Fillies Turf. That’s a pretty strong success rate considering the Juvenile Fillies Turf annually draws a large field of fillies from around the globe.

Will we see the 2022 Breeders’ Cup Juvenile Fillies Turf heroine start in the Natalma? It’s certainly a possibility. Eight promising 2-year-old fillies were entered in the one-mile turf test, including #1 Cairo Consort, who looms as a possible standout.

Cairo Consort didn’t begin her career on the strongest note. She lost her first two starts competing on Tapeta Footings synthetic surface then on the turf, both at Woodbine, finishing third and fourth without ever challenging for victory. The third time proved to be the charm as Cairo Consort displayed newfound front-running speed to win a maiden special weight on the Woodbine grass in gate-to-wire fashion.

That effort served as a perfect prep for the Aug. 20 Catch a Glimpse Stakes at Woodbine, a local prep for the Natalma. Facing 11 2-year-old fillies, Cairo Consort completely change tactics compared with her maiden victory, dropping back to seventh place for the first half-mile. But in the final five-sixteenths of a mile, Cairo Consort launched a sharp rally up the rail to pull away and win by 2 1/2 lengths.

Cairo Consort is one of only two stakes winners in the Natalma field, and she’s the only entrant with a stakes win on turf to her credit. Even better, Cairo Consort has already defeated five of her eight Natalma opponents and seems destined to enjoy another ground-saving trip while breaking from post-position one, setting the stage for victory.

If we bet Cairo Consort on top of exotic wagers like the exacta and trifecta, we still have to decide which fillies to support underneath. Certainly #5 Adora and #2 Collecting Flatter are logical contenders after finishing second and third, respectively, in the Catch a Glimpse, separated by only a head. Collecting Flatter has lots of early speed and led from start to finish in the My Dear Stakes on the Woodbine Tapeta surface two starts back, but Adora has shown versatility in terms of running style and is trained by Mark Casse, a seven-time winner of the Natalma.

We can’t overlook #3 G Laurie either. Hailing from the barn of Kentucky Derby-winning trainer Graham Motion, G Laurie impressed in her debut racing 1 1/16 miles on the Colonial Downs turf course, launching a sweeping rally from off the pace to trounce her pursuers by six lengths. It wasn’t the fastest race on paper, but G Laurie’s performance was flattered when third-place finisher Katie Got Lucky returned to dominate her next start by 11 1/4 lengths.

#6 Wickenheiser also warrants a mention. She won her July 2 debut at Woodbine with a determined rally through traffic and counted Cairo Consort among her beaten rivals. The tables were turned when Wickenheiser finished fifth in the Catch a Glimpse Stakes, but she was only beaten by one length for second place while rallying on the extreme outside. If she gets a better trip in the Natalma, Wickenheiser can move forward for hot trainer Kevin Attard, a 22% winner at Woodbine this year.

So how should we bet the Natalma? If you’re looking to play the race on a small budget (say, $10), we recommend betting Cairo Consort over Adora and G Laurie in an exacta. But if you want to spend a bit more (maybe $30) and pursue bigger payoffs, we recommend playing a trifecta adding Collecting Flatter and Wickenheiser for third.

2022-09-15
Previous Post: Why Should You Play the Jackpot Slots on House of Fun?
Next Post: NFL Week 1 Injury Report