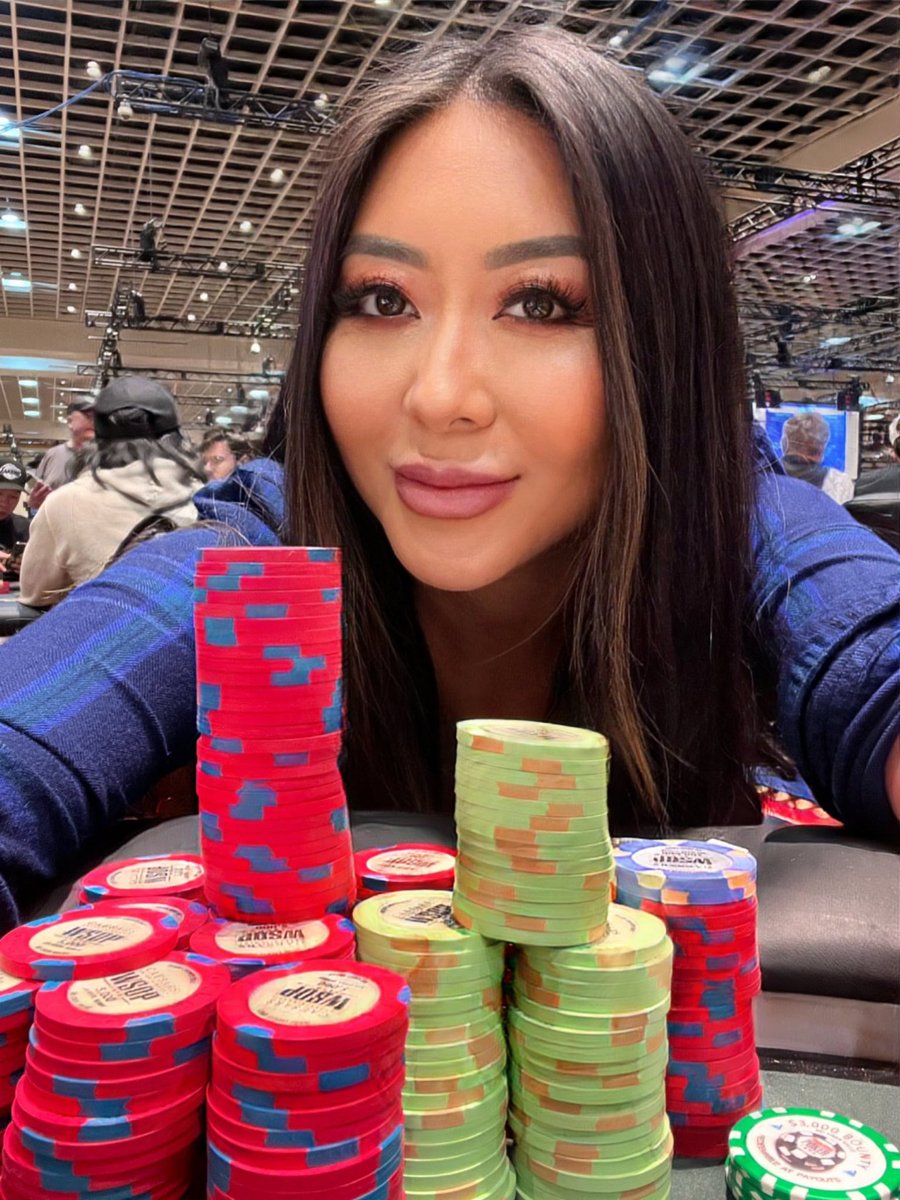 With the end of the World Series of Poker also comes the end of Daniel Negreanu’s annual 25K fantasy draft, with Maria Ho’s team taking home the win and the $200K first-place prize. Negreanu’s team put up 973 points, which would have been enough to win in a typical year, but Ho’s team put up a record 1,140 points.

When she wasn’t raking in tournament chips at the WSOP, Maria Ho was racking up points in the annual $25K fantasy draft. (Image: Twitter/Maria Ho)

Negreanu made $100K for second place, which is nice, but not nearly enough to get him even after a disastrous summer where he lost a million dollars in tournaments. Third place went to a team of PokerGO employees, including Jeff Platt.

How the 25K fantasy draft works

Team captains started with a $200 budget to draft their team and any well-known player is available to bid on. Negreanu sold for the highest price, $111, because of his consistent results and previously stated intentions to play all of the high-roller events. Shaun Deeb went for only a dollar less at $110. The bargains of the series included Daniel Weiman and Koray Aldemir, while Negreanu himself was one of the biggest busts. 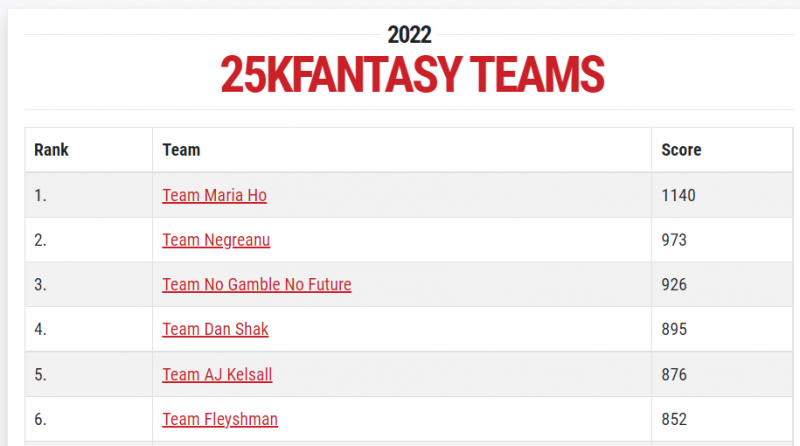 The 25K Fantasy League, and poker fantasy leagues in general, have grown in popularity to the point where 25kFantasy.com also hosts three other leagues.  The other leagues use the draft salaries from the 25K league and allow the entrants to create a team using $200 of virtual money.

The 2.5K Fantasy league is like the Mini Main of the fantasy leagues at just 10% of the buy-in of the 25k league. The smaller league drew 19 entrants and paid out four spots, with $20K awarded to the first-place team.

Poker strategy site Solve For Why also ran a league this year. The entry fee was $500 and the league drew 48 entries. The Solve For Why league paid out four spots, with $14K for first place. Rules were unique in this league, requiring players to draft from a number of different categories like Rising Star, Long Shot, and Journeyman. Scoring was also done differently, with cash prizes playing a much bigger part of the equation than they do in the other contest.

The final league on the 25K Fantasy site is the ODB League. This is the worst league ever and no one should ever play it. I know this because I played it and drafted a really great team that ended up 421st out of 433 teams. The ODB league is clearly rigged.

I mean, how do I get a team like this and finish in the bottom 5%? Amazing. 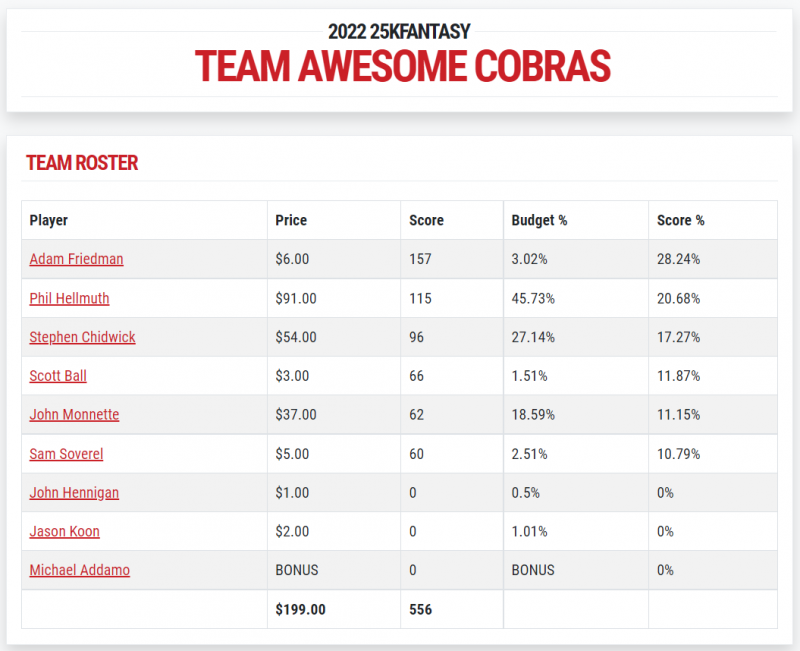 I had so much hope for this team. (Image: 25kFantasy.com)

Looking for bargains in the ODB league

I figured Koon, Hennigan, and Soverel were just too good at their super cheap prices. I knew I was getting a bargain on Scott Ball who won the No-Limit POY last year and was planning to play everything, including some high rollers. Adam Friedman going for $6 seemed completely ridiculous, the steal of the draft, and I was right on that one at least. He earned me 157 points for that $6.

I was sure that Deeb was the best pick in the draft at almost any price. He’s a consistent, big scoring threat and shows no sign of letting up, but I couldn’t afford him while also getting Monette and Chidwick, who I thought were bargains and two of the best players on the planet. So I picked up Hellmuth instead. Big mistake.

I watched Hellmuth a lot last year, and I knew he was planning on playing a ton of events this year, including some high rollers, so I thought he was a good buy with my remaining dollars. But Hellmuth had a mediocre summer, and Monette and Chidwick didn’t play as much as I hoped.

I knew there was a risk that Hennigan wouldn’t play much. The same with Adamo, but to have both of them, and Jason Koon, put up zero points was devastating and left me with no chance of winning any money back.

I had a great time for the first week or two, and the draft portion was really interesting. I went through a number of iterations before I solidified my team, including one that would have made the money. But after the first week or two, it was obvious I was out of the running and that took some of the fun out of it for me. That was probably true for more than half the field.

That knowledge, that you don’t have a chance early on because a few teams have had massive scores, is really the biggest downside of these fantasy leagues. If I were designing a league for poker fantasy drafts, I would definitely add more players per team and cut down on the points awarded in the high rollers so that a few tournaments in the first two weeks don’t ruin the fun for half the field.

While I have minor complaints about the scoring, the experience was a ton of fun and everything was very professionally run. Getting the site updated regularly isn’t a simple task, and the slick and clean interface on the site made it easy to see how my team was doing. Which was terrible. My team was doing terribly every time I checked.

If my team was a horse in a race, I wouldn’t know where its finish position was yet because it would still be running. But, I’ll be back next year — hopefully with a little better understanding of how to draft a team. My current approach would be to get Shaun Deeb and then get as many players as I can who are likely to get a bunch of cashes in small fields. Kevin Gerhart and Scott Ball should be bargains next year, and maybe Chidwick will be cheaper after his lackluster performance this year.