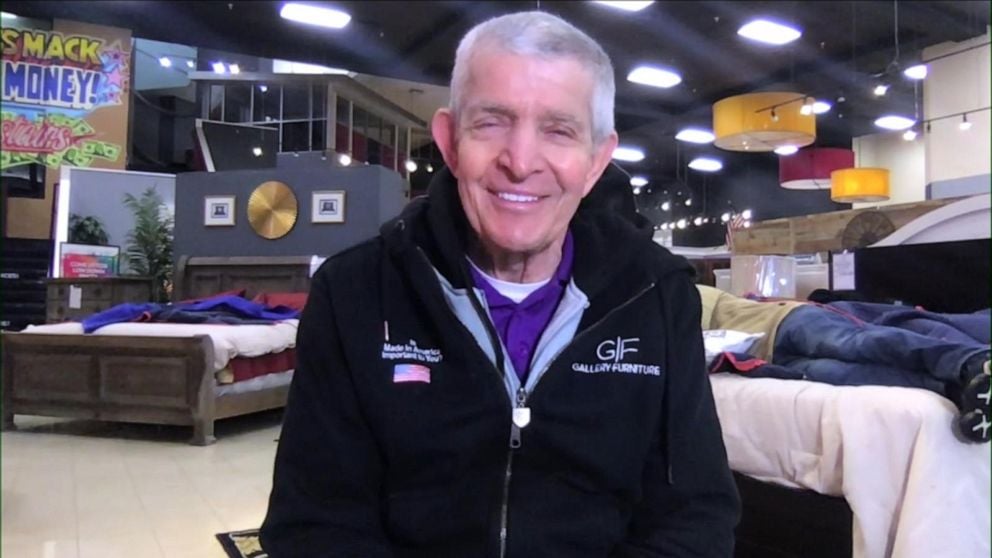 “Mattress Mack” has made some big bets over the past few years, but the Houston businessman and noted sports bettor made a huge one just a few days ago. If it hits, he’ll walk away netting $46 million.

Houston businessman Jim McIngvale, better known to sports bettors as “Mattress Mack,” is interviewed at one of his Gallery Furniture stores in the Texas metropolis. Mack this past week placed $2 million in bets on the New England Patriots to win the Super Bowl in February. At +2300 odds, Mattress Mack would net $46 million if the Pats win. (Image: ABC News)

Mack, whose name is Jim McIngvale, placed two wagers totaling $2 million on the New England Patriots to win the Super Bowl, according to theScore. He made the wagers on Thursday, the same day the Patriots beat Atlanta to win their fifth-straight game.

The bets were placed with theScore Bet, which took a $750,000 wager, and Barstool Sportsbook, where Mack placed a $1.25 million bet. Both sportsbooks had the Patriots at +2300. If Bill Belichick can guide the team to its seventh Super Bowl championship, then the Houston mattress store owner will get an eight-figure return, plus the $2 million he bet.

Both sportsbooks are owned by Penn National Gaming. After announcing in August the purchase of Score Media, a Canadian-based sports media company that entered the US sports betting market in 2019, the two sides closed the $2 billion deal on Oct. 21.

Mattress Mack Has Made Some Astronomical Bets

Mattress Mack became a sports betting celebrity as he began making high-dollar wagers on the Houston Astros to win the World Series. The bets allow the Gallery Furniture owner to cover promotions he runs offering customers who purchased certain mattresses valued at $3,000 or more to get them for free if the hometown baseball team won the World Series.

He ran the promotion again this year as the Astros made it back to the World Series. He bet $2 million on them in June, when they had odds of +1000. He also made a $100,000 bet with theScore Bet in Colorado, which had +1600 odds on Houston at the time.

Houston made the World Series last month but wound up losing to Atlanta, which beat the Astros in six games.

The bet on the Patriots is not the first time, Mack has gone for a team outside of Houston. In February, he placed a nearly $3.5 million bet on the Tampa Bay Buccaneers to cover the 3.5-point spread in Super Bowl LV. When Tom Brady and the Bucs won outright, so did Mack to the tune of more than $2.7 million.

Mack also involved in horse racing, having been the owner of stakes winner Runhappy. In May, Mack went to Churchill Downs and bet $2.4 million on favorite Essential Quality at the Kentucky Derby. Again, the bet was tied to cover a Gallery promotion.

While the horse ran a strong race, Essential Quality never could get inside the pack and finished fourth.

While New England was the best franchise in the NFL for nearly two decades with Brady at quarterback and Belichick on the sidelines, the Patriots took a step back after letting Brady sign with Tampa Bay last season. While Brady won another Super Bowl, the Pats missed the playoffs for only the fourth time since 2000, when Belichick took over.

Many weren’t expecting much from the Patriots this year, especially since they were going with rookie Mac Jones at quarterback and AFC East division rival Buffalo was coming off a season where the Bills reached the conference final.

But through Sunday’s games, the 7-4 Patriots now hold the league’s current longest winning streak and a one-game lead over the Bills in the AFC East. Jones has played well at times during the streak, including a 19-for-23 passing performance for 198 yards and three touchdowns in a 45-7 win over Cleveland.

While they’re on a roll, the next four weeks will likely determine their postseason chances.

Next Sunday, the Patriots host the 8-3 Tennessee Titans, who still own the AFC’s best record despite losing to the Houston Texans on Sunday. After that, they play the Bills twice in a three-week stretch and travel to playoff contender Indianapolis inbetween.