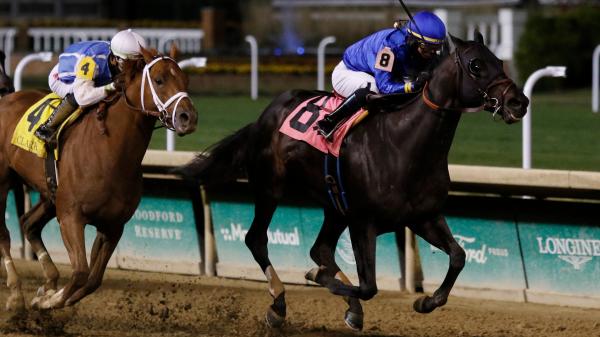 Maxfield Goes Out a Winner in Clark

Godolphin’s homebred Maxfield emphatically concluded an 11-race career Nov. 26 at Churchill Downs by taking the $749,334 Grade 1 Clark Stakes Presented by Norton Healthcare over Happy Saver. As planned since earlier this fall, Maxfield now retires and joins the stallion ranks at Darley at Jonabell Farm for 2022.

Friday’s victory, his second at the grade 1 level after first capturing the 2019 Grade 1 Claiborne Breeders’ Futurity at Keeneland as a juvenile, improved his Churchill Downs record to 5-for-5. Four of those victories have come in graded stakes.

His affinity for the Churchill strip was on display Friday, as was his adaptability. With little speed in the Clark other than 3-year-old Midnight Bourbon, Maxfield, without much coaxing from jockey Jose Ortiz, grabbed the position he needed, racing right behind the pacesetter.

Making his first start against older horses, Midnight Bourbon proved stubborn until the final furlong, when Maxfield surged to the front.

With approximately a sixteenth of a mile remaining, Happy Saver pulled alongside Maxfield’s outside flank, but Maxfield responded to fend him off. He scored by a half-length, completing 1 1/8 miles in 1:49.06.

“I knew I put Midnight Bourbon away and switched (urging) to my left hand, and he gave me another gear when he saw Happy Saver coming,” Ortiz said.

Maxfield paid $4.40 to win as the second choice in the wagering behind Midnight Bourbon, who was narrowly favored, also at 6-5 odds.

The victory was the first in the Clark for trainer Brendan Walsh and Ortiz, who traveled from New York for the ride.

Maxfield notched his eighth victory Friday to go along with two seconds and a third. The Clark advanced his earnings to just over $2 million. He is now the richest horse Walsh has trained.

“I’m just delighted he got the job done and went out on a winning note,” the trainer said. “This is a very prestigious race. And it was nice, you know, that he could win it and hopefully he can go on to have a great stud career.

“But he’s just been an unbelievable horse. I can’t say enough about the horse. I mean, he’s been fantastic from the get-go. He’s come back from an injury. He’s been a great learning experience for all of us. And, you know, he’s helped me get out of bed in the mornings—a lot—In the last two years, and it’ll be hard to find another one like him.”

Maxfield is one of five foals out of the winning Bernardini mare Velvety, though Maxfield is her sole winner from three to race. She also has a 2-year-old Medaglia d’Oro filly named Loved and foaled a Uncle Mo colt this year. Velvety is out of the multiple graded stakes-winning Caress, making Velvety a half-sister to graded stakes winner and sire Sky Mesa (Pulpit).

Godolphin has indicated that Maxfield’s stud fee would be announced sometime after the Clark.