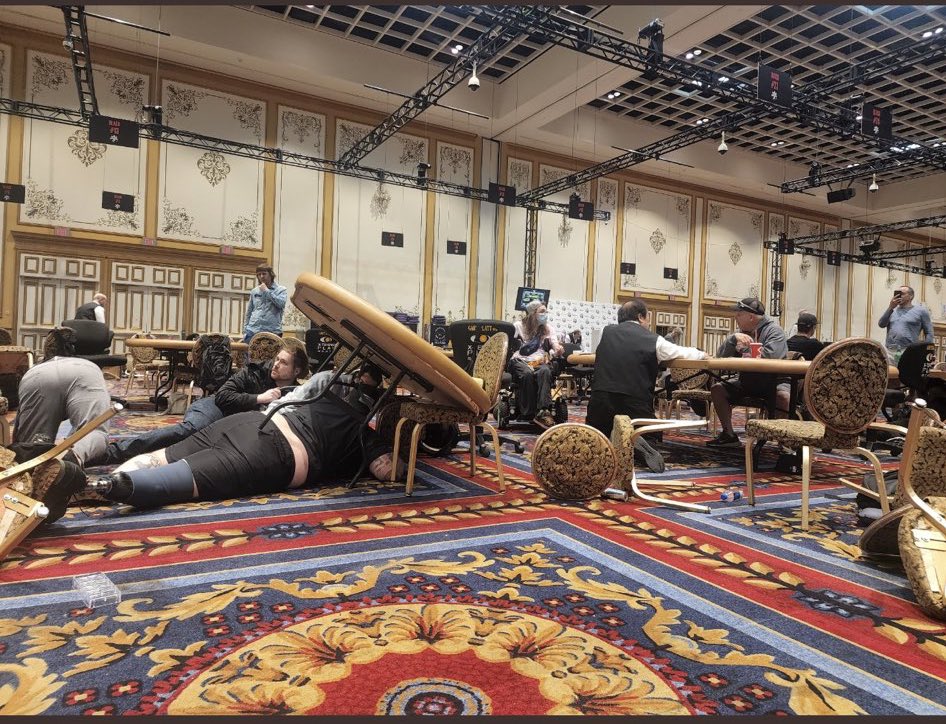 A mass panic that caused injuries to several poker players rolled through Las Vegas Strip casinos Saturday night after the sound of a window breaking was mistaken for the gunshots of an active shooter.

Las Vegas Police say a window was shattered by rocks in the valet area of the MGM Grand caused the panic to ripple through casinos all over the Strip, including the home of the World Series of Poker, Bally’s and Paris, where poker tables were overturned and people were trampled trying to escape what was a false alarm.

According to my Twitter feed, this wave of panic rolled from Excalibur through every casino along the way to Ballys. That’s through more than 10 properties! That’s insane. https://t.co/YpGSCNCrms

Poker players who were in WSOP events and cash games at Bally’s and Paris casinos were told to evacuate around 10:45 p.m. PT, and apparently few did it orderly as word spread of a possible active shooter. The WSOP Main Event had finished only a couple of hours before.

This is @Kevmath, players have been told to clear the tournament area.

No update at this moment about the status of tournaments that were happening.

There does NOT appear to be an active shooter at Paris.

This is a professional and calm way to say full stampede of people running full sprint towards exits away from possible active shooter so now the WSOP room is empty https://t.co/VzEv8cm5Fw

Daniel Negreanu was one of the players hurt during the stampede, getting a nasty cut on the palm of his hand he said was caused by being “trampled preflop.” Warning: gore.

How my WSOP ended… pic.twitter.com/dabeNhIT09

WSOP Circuit ring winner Michael Trivett was also one of the people injured at Paris.

Was walking out of Paris as people started running screaming shots fired and fell and got trampled. That’s GG for me see y’all next year

Announcer and poker player Vanessa Kade said she fell down and was being stepped on by people who thought they were running away from a murderer with a gun. She later thanked poker player Eddy Sabat for helping her back to her feet and away from the crowd.

Brown haired guy in grey was @EddySabat, who pointed out I couldn’t stand up because people kept stepping on me, so he stopped and turned around (theoretically risking his own life) to block people from trampling me so I could get up.
❤️❤️❤️❤️❤️❤️❤️❤️❤️❤️❤️❤️❤️ https://t.co/B1APW1MdtT

Pro player and announcer Maria Ho witnessed the melee, reporting she saw people running over each other in terrified panic. From a now-deleted Tweet.

The saddest part of what I experienced tonight with the false alarm active shooter at the #WSOP where I saw people getting trampled running for their lives is that this was an unfathomable reality for others all across America-places like #Uvalde and #SandyHook weren’t so lucky.

The shouts of “shooter” made it all the way to the poker room at the Bellagio, almost a mile from the broken window. Players either took off or dove under the tables, leaving their chips, cards, and hands in stasis. Sorel Mizzi was there.

In 2017, Las Vegas was the scene of the deadliest mass shooting in United States history when 58 people were killed and 850 wounded at the Route 91 Harvest Festival by a man with a high-powered assault rifle who used a room on the 32nd floor in the Mandalay Bay as a snipers crow’s nest.

People are also surely on edge because of two mass shootings that recently took place in the US.

On July 4, eight people were killed at a parade in Highland Park, Ill., after a man opened fire from a rooftop. And on May 24, 19 elementary students and two teachers were murdered by a teenager with an assault rifle at a school in Ulvade, Tex.

This turned out to be a mass panic caused by a glass door shattering at MGM.

America has full-blown PTSD, and it’s both extremely sad and extremely angering. https://t.co/5Xl63l8FX8

The final table of the $3K HORSE continued to play four-handed, but was paused with three players after a 10-hour day. It will conclude today.

The 9 p.m. $400 Daily Deepstack tourney also continued, but players who were sitting at one of the tables that was turned over, table 161, were eligible for a refund.

The last open bracelet event of the Series, the $1,000 Super Turbo, also began today, with the Tournament of Champions scheduled to start tomorrow.

The stampede in question… at first security was telling people to get out and saw them arrest someone (who looked like a drunk) pic.twitter.com/9PkE5lFOjP