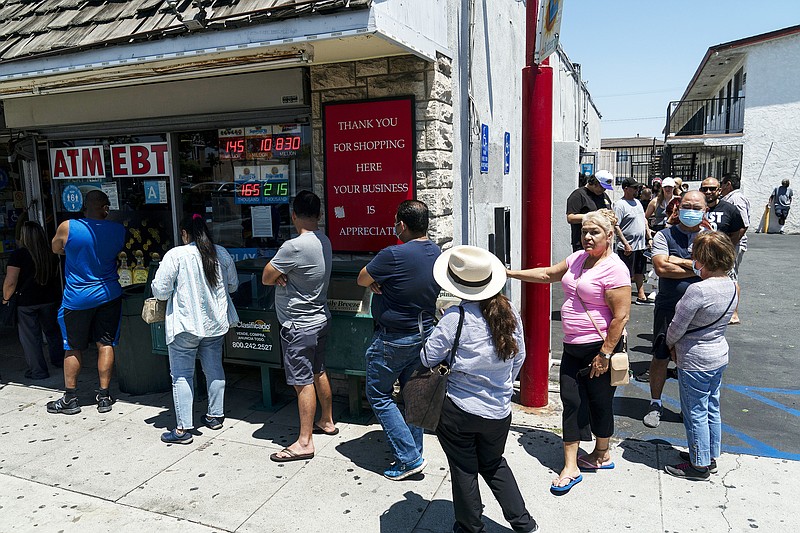 Many Nevada residents are heading out of state to buy Mega Millions tickets. That despite the fact they live in a gambling mecca, and the odds of winning the $1.28 billion (and growing) lottery jackpot on Friday are 1 in 303 million.

People wait in line outside of Blue Bird Liquor in Hawthorne, Calif., to purchase Mega Millions lottery tickets. The latest jackpot was estimated at $1.28B as of midday Friday. (Image: AP/Jae C. Hong)

Nevada does not sell lottery tickets, but Mega Millions tickets are sold in border towns in California and Arizona.

So now residents are flocking to these nearby locations to purchase tickets. One popular destination for Nevadians is the Lotto Store in Primm, Calif. It had long lines of customers on Thursday, given that it is a reasonable 44 miles from Las Vegas.

Hopeful ticket purchaser Jacques Maxey was among those in line. He told the Las Vegas Review-Journal that he, his wife, and two of his four children drove to the store on Thursday.

If he wins, he wants a new house, new car, and money to start a new business.

Many waiting to purchase lottery tickets sat in folding chairs under umbrellas to remain in the shade and had fans running to cool hot temperatures.

Albert Edwards Jr. admitted his odds of winning are “a gazillion to 1,” the Review-Journal reported. But his shirt told everything.

It was a “WELCOME TO IMPOSSIBLE” Golden Knights ice hockey T-shirt.

If he wins, Edwards will pay off what he owes on his house. He would also share some of the loot with his five children, six grandchildren, and one great-grandchild.

Logan Teeter, an EMT in Clark County, has a more strategic approach to the payout if he wins. He would go for the $650 million lump sum.

“I’d take the lump sum and put it all in investments or savings and get a money manager,” Teeter revealed to the Review-Journal.

Another person in line was Debra Martin of Las Vegas. She wore a yellow T-shirt with the popular characters from the “Golden Girls” TV show. She was planning to purchase six tickets. What is her lottery philosophy?

Don’t give up. You can always try again and buy more tickets,” Martin told the newspaper.

If Martin wins, she will give money to her relatives, travel, and donate to Tennessee’s St. Jude Children’s Research Hospital. It is best known for its efforts to treat children with cancer.

Nevada prohibits the sale of lottery tickets. Some of those who drove to California pointed out the high price of gasoline when driving to out-of-state locations.

It stinks that Nevada makes us drive all the way to California for lottery tickets since gas costs so much,” Ricardo Pasadas told the Review-Journal. He has driven to Primm three times in the last two decades to buy lottery tickets.

Other options to buy tickets are in Arizona near the border. Many Nevada residents this week went to White Hills, Ariz.’s “Arizona Last Stop” shop.

One person in line there was Gayle Rauch of Southern Highlands, Nev. She called the jackpot “life-changing money.”

Hoping to Donate to Charity

If she wins, she will donate to charity. “Because it’s too much money,” Rauch told KLAS, a Las Vegas TV station.

Similarly, Krystyna Arusztowitz of Las Vegas said she just wants “a little bit.” She wants to use a lot of the money to “help people around the world, especially the Ukrainian people. It’s so sad to see the kids and the innocent people,” she told KLAS.

The Mega Millions numbers will be drawn at 8 pm (PT) and 11 pm (ET) tonight. Up for grabs is the second-largest jackpot in its more than 20-year history. Mega Millions is played in 45 states, Washington, DC and the US Virgin Islands.

If no one wins, watch out for more lines at the Lotto Store or lottery locations in Arizona. The next drawing after tonight is Tuesday.