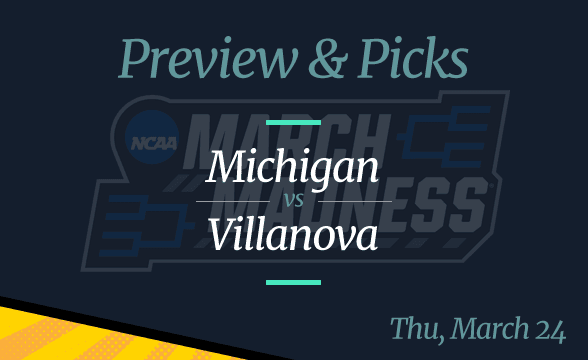 #11 Michigan Wolverines vs #2 Villanova Wildcats is one of the most exciting duels of March Madness Sweet 16 as both teams have been playing fantastic basketball in 2022. Oddsmakers see the Wildcats as the favorite to win, although the spread is set to just 4.5 points, suggesting that Thursday’s game could turn out super-interesting. And games between these two tend to be very interesting!

Last decade, we saw three duels between Michigan and Villanova, two of which were won by the Wildcats, including the one played in the NCAA Championship game in 2018. Still, the most recent Michigan vs. Villanova saw the Wolverines grab a blowout 73-46 win.

Of course, both teams have changed since then, but this doesn’t mean either is worse than before. On the contrary, judging by what we saw from them in the 2021-22 season, these two are among the best teams in the nation. The question is which one is better?

Odds taken on March 22 from FanDuel.

Can Michigan Upset the Odds?

Priced at +179, the Wolverines are seen as an underdog in Sweet 16. However, the same was the case in Round of 32 when they played the Tennessee Volunteers (#3). Despite entering the game as a +240 underdog (7.5-point spread), the Wolverines ended up winning 76-68.

Even in the game before that one, we saw Michigan cause a sort of a surprise. The game in question is the Round of 64 clash with the Colorado State Rams (#6), in which the Wolverines were 1.5-point favorites before the start of the game. Not only did they cover the spread, but they finished the game with 12 points more than their rivals.

Bookmakers don’t seem to have faith in the Wildcats, giving the odds of 15.00 on Villanova winning the NCAAB title. There are six other teams that have shorter odds. Nevertheless, Villanova’s players seem to have plenty of confidence after doing great in the previous two rounds.

As a reminder, we saw the Wildcats obliterate the Ohio State Buckeyes in the second round. The final score was 71-61, which may not seem too impressive, but Villanova’s boys were fabulous on the court. An even more impressive performance happened in the first round when they destroyed the Delaware Blue hens 80-60.

These guys have been playing great since the start of the year and are on a 7-game win streak at the moment. The last time they lost a game was on February 22, when the Connecticut Huskies beat them by just two points.

This is going to be a very close game, even though the Wildcats should grab a win in the end. Villanova will probably win, but we might not see this team cover the spread. Instead, only a couple of points might decide the game.

Picks: Villanova Wildcats to win but not cover the spread; over 134.5