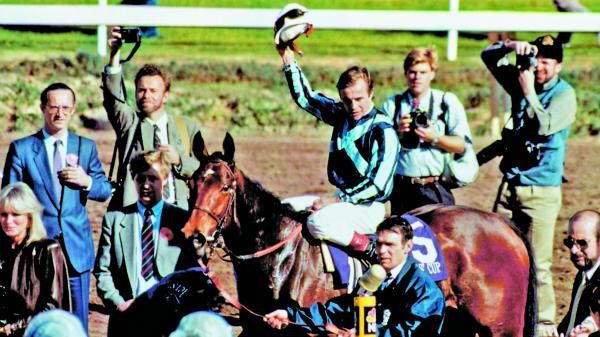 There can no doubting that the great Miesque was a racehorse in the truest sense.

If you had felt inclined to place a $2 show bet on Miesque every time she ran, you would have never been disappointed — the brilliant bay filly never finished out of the top three in 16 starts spanning eight racetracks in France, England, and the United States. Of course, $2 win bets would also have been profitable, because the occasions when Miesque suffered a defeat were few and far between.

Bred and owned by Stavros Niarchos’ Flaxman Holdings, Miesque was born in Kentucky in 1984. Her sire was the top-class champion miler Nureyev, while her dam was the stakes winner Pasadoble, a daughter of the talented dirt runner Prove Out, who memorably defeated Secretariat in the 1973 Woodward Stakes.

Thus, Miesque had the pedigree to be considered a potential star on both turf and dirt, though she ultimately took after her sire and wound up exceeding him as a turf miler. Indeed, some might be inclined to argue that the world has never seen a more brilliant and tried-and-true turf miler than Miesque. The renowned handicapper and writer Steve Davidowitz, in his book “The Best and Worst of Thoroughbred Racing,” went so far as to write: “Frankly, I doubt there was a better turf miler, male or female, since grass racing began in this country.”

Miesque’s talent was apparent from an early age. Conditioned by the renowned French trainer Francois Boutin, Miesque won her career debut as a 2-year-old against males at Deauville in France by two lengths before jumping up sharply in class for the Group 1 Prix Morny just two weeks later. She was beaten on that day, finishing third by one length, but the experience seemed to do her good and she subsequently posted back-to-back wins in the Group 1 Prix de la Salamandre (while facing males) and the Group 1 Prix Marcel Boussac (against fellow fillies).

Not surprisingly, her exploits against top-class competition earned her the title of champion 2-year-old filly in France, the first of many championships she would earn during the course of her career.

In 1987, Miesque embarked on perhaps her most memorable campaign, an eight-race season that would yield glory in three different countries. An easy win against a small field in the Prix Imprudence served as an ideal prep race for the prestigious Group 1 One Thousand Guineas going a mile at Newmarket in England, where Miesque would face some of the most talented 3-year-old fillies in Europe.

It was arguably in the Guineas that Miesque first displayed the sheer brilliance and acceleration that would become her defining trait. After racing in midpack for much of the race, Miesque found herself racing behind horses as the field entered the final two furlongs. Unable to find an opening in between runners, jockey Freddie Head was forced to pull back on Miesque and steer her around horses for clear running. Such a move might have discouraged a lesser horse, but as soon as Miesque saw daylight she lengthened her stride and roared past the leaders to win going away by 1 ½ lengths.

Miesque picked up a second classic victory when winning the Group 1 Poule d’Essai des Pouliches (French One Thousand Guineas) 2 ½ weeks later, rallying from last to win with ease on a rain-soaked course. And while she couldn’t quite handle the 1 5/16-mile distance of the Group 1 Prix de Diane (French Oaks), her overall class and ability still enabled her to finish second in an admirable performance.

For the second half of the 1987 racing season, Miesque would race exclusively in one-mile races, and the results were — for the most part — breathtaking. Given two months off following the French Oaks, Miesque came back refreshed to win the Prix Jacques le Marois at Deauville by three lengths, and she was just as authoritative in the Prix du Moulin de Longchamp, sprinting clear of her rivals to prevail as the overwhelming favorite in the wagering.

But when Miesque turned out for the prestigious Group 1 Queen Elizabeth II Stakes at Ascot, her backers were in for a surprise. As reported by Richard Baerlein in the Sept. 28, 1987 edition of London’s The Guardian, the Michael Stoute-trained pacemaker Verdant Boy opened up a 10-length lead early on, which proved beneficial to his pace-tracking stablemate Milligram, who got the jump on Miesque and raced to victory as the favorite struggled to close the gap after falling too far behind early on.

“The defeat of the French champion Miesque … was not only the sensation of the day but of the year,” wrote Baerlein. “The Stoute pacemaker and Milligram ensured that waiting tactics, which are more or less essential for [Miesque] … were not going to pay off in Saturday’s epic struggle and that, rather than the fact that she has gone over the top, could account for the defeat of Miesque.”

This seemed like a logical explanation given that Miesque had decisively defeated Milligram in the One Thousand Guineas, and when both fillies traveled to Hollywood Park in California to contest the fourth running of the $1 million, Grade 1 Breeders’ Cup Mile, Miesque’s superiority was thoroughly reestablished. This time around, Miesque stayed within striking range of the leaders while saving ground, and when a narrow opening appeared along the rail at the top of the stretch, Miesque shot through and powered away from her 13 rivals to win by 3 ½ lengths in a breathtaking performance.

“I had to stay inside all the way,” jockey Head said in the Nov. 22, 1987 edition of Louisville’s The Courier-Journal. “Halfway through the turn, the leader came out a little bit and my filly went to the gap.”

“She broke a little slowly out of the gate, but she has a brilliant turn of foot,” commented Boutin.

Miesque’s final time of 1:32 4/5 lowered the existing course record by three-fifths of a second, a tremendous finish to an extraordinary campaign. Her domination across the globe earned her an Eclipse Award as the champion turf female of 1987, as well as titles as champion 3-year-old filly and champion miler in both France and England.

The following year, Miesque put together an abbreviated racing season comprised of just four starts, but her results were nearly perfect.  She started off by stretching her miler speed to 1 1/8 miles for the Group 1 Prix d’Ispahan at Longchamp, overcoming a traffic-troubled trip to prevail by a neck. Later in the summer, she scored a repeat win in the Prix Jacques le Marois, but a quick turnaround to try for a repeat win in the Prix du Moulin de Longchamp ended in frustration; she encountered another troubled trip and failed by just a head to catch Soviet Star, whom she had beaten by 2 ½ lengths the previous year.

This surprising defeat, coupled with the emergence of the 3-year-old Warning as another star turf miler on the European racing scene, left Miesque as the narrow second choice in the wagering (as part of an entry with stablemate Blushing John) when she returned to the U.S. for the 1988 Breeders’ Cup Mile at Churchill Downs. But as was the case the year before, Miesque shrugged off her pre-Breeders’ Cup defeat and made a mockery of anyone who doubted her talent, settling in midpack before exploding in the final furlong to crush the field by four lengths.

“She’s a fabulous horse, a super horse, and she had a beautiful run,” commented Head in the Nov. 6, 1988 edition of The Courier-Journal. But it was Laffit Pincay Jr., rider of the distant runner-up Steinlen, who paid Miesque perhaps the truest compliment of all:

“I saw her move,” he said, “but nobody could do anything to stop her.”

Having made history by becoming the first horse to win two Breeders’ Cup races, Miesque was retired with great fanfare; she received another Eclipse Award as North America’s champion turf female and received similar honors as a highweight in Europe, along with another title as France’s champion miler.

Not all great racemares make great broodmares, but if anything, Miesque had an even bigger impact as a broodmare than a racehorse. Her best foals included the Group 1-winning turf milers East of the Moon and Kingmambo (with the latter proving to be a top sire as well), and Miesque also produced the Group 3 winner Miesque’s Son, who in turn sired Miesque’s Approval, who maintained the family tradition of turf mile dominance by winning the 2006 Breeders’ Cup Mile. Another direct descendant of Miesque, Karakontie, won the 2014 Breeders’ Cup Mile.

Miesque passed away from old age in 2011, a couple months after Head stopped by to visit the great mare while in Kentucky for the 2010 Breeders’ Cup.

“On a given day, I rode horses that were as good as she was,” mused Head in the Jan. 29, 2011 edition of The BloodHorse, “but I never rode one better than her.”

Note: This story was originally published in October 2018 and has been updated.