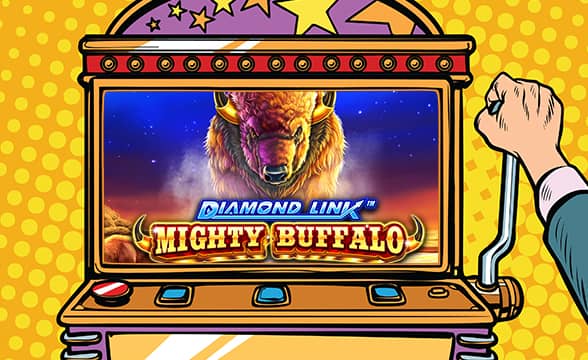 NOVOMATIC Digital Gaming and Entertainment’s division Greentube that specializes in online and mobile games has launched Mighty Buffalo, the latest title in the Diamond Link series. The game comes with two progressive jackpots and plenty of special bonus features for greater wins.

As fans of the successful Diamond Link series might expect, the fresh release is also built on highly innovative game mechanics. The game has plenty of entertaining features supported by the potential of winning a massive progressive jackpot. Players familiar with Mighty Elephant’s diamond hunt in the slot savannah or Mighty Emperor’s reel spinning marathon will appreciate the series’ comeback with yet another unforgettable adventure.

The new game focuses on the majestic American prairies where players are invited to become one with the nature and the wild animals around them. Providing their survival skills will bring them plenty of rewards on top of a potentially massive jackpot.

The company’s director of games development and operations Steve Cross spoke about the “tried and tested” potential of the buffalo theme. He also mentioned the “great win potential” triggered by the higher volatility compared to other games in the series.

The slot’s animation is top-notch, with vibrant colors and beautifully designed symbols. Card symbols are low-paying symbols, while wild animals pay up to 6x the bet. Coming across buffalo symbols brings players wins of up to 30x. The game also features a Wild symbol that rewards gamers from 0.4x up to 30x, along with Sticky and Colossal spins, Golden coins, Diamonds scatters, and Diamond link symbols.

To trigger the special Diamond Link feature, players must land a minimum of six diamond symbols during a spin. As a result, they are carried in a rewarding Hold N Spin bonus round packed with Wild, Colossal, and Sticky Spins. During the Colossal Spins, the three reels at the center of the grid display a huge symbol that can turn the wild symbols with x2 or x3 multiplier on them.

During the Wild Spins round, players are given one free spin with a random number of wilds popping on the reels with x2 or x3 multiplier attached to them. Respins are also possible thanks to the Sticky Spin feature. During this round, the winning symbols remain on the reels until no other winning symbols are showing. All wilds that belong to a win line also feature a x2 or x3 multiplier on them, further boosting the game’s win potential further.

The game comes with two lucrative progressive jackpots, a Major and a Grand jackpot.

At the beginning of June, Greentube announced it would expand its presence in the US by launching its content in New Jersey via the BetMGM platform. At the start of the year, the company partnered with GameAccount Network to introduce its social games to the American public.