A mistake at the final table of a $1 million guaranteed World Series of Poker Circuit event bounced a player, and the only people who seemed to notice were the stream’s producers who immediately cut the online broadcast and wiped the accompanying chatrooms that bubbled with critical comments.

Dealers, the floor, and the eliminated player didn’t notice that it’s a split pot. Did the players know? (Image: YouTube)

While today’s (Jan, 24) streams have returned, they’re continuing without giving viewers access to the tainted hand and everything that came before it. And at least in the case on it’s YouTube’s English-language broadcast, without the chat feature.

With five players left in the €1,700 Main at King’s Casino in the Czech Republic, and blinds at 60K/120k, Pierre Kauert pushed his last 1 million in pre-flop with JT. “Lupo” called with KJ. The pot was about 2.2 million, leaving him about 4.2 million behind.

The flop came AQ6. The turn turn hit both players with a jack. Kauert was still alive with a 10 for the win, or an ace, queen or six for a split.

A six hit the river.

“Unlucky Sir, good game,” wrongly said the announcer, as Kauert went around the table shaking hands and saying goodbye to his competitors, none of who spoke up.

But it should have been a split pot.

The dealer, floor, and Kauert himself didn’t notice the mistake, so he’s the fifth-place finisher of this year’s Main in Rozvadov.

But plenty of viewers on King’s Resort’s Twitch and YouTube livestreams across several different languages noticed and chimed up in the chatrooms — and then the stream was cut across all the platforms, the video of the first part of the final table removed, and the chat boxes were deleted.

King’s Resort streamed featured tables of most of the WSOPC events that happened the past week at its casino.

This was the case today, with the final table of its Main Event that began Jan. 22.

As it started, the poker world watched as Bastian Gallitzendorfer, Guiseppe Abbonizio, Klas Krueger, and then Kauert were eliminated in that order.

But friends and family who want to how the elimination hands were played out are currently out of luck, because right after the tainted Kauert hand, King’s Casino briefly stopped the streams and removed the video across all its platforms before restarting the broadcast a few minutes after it took place. 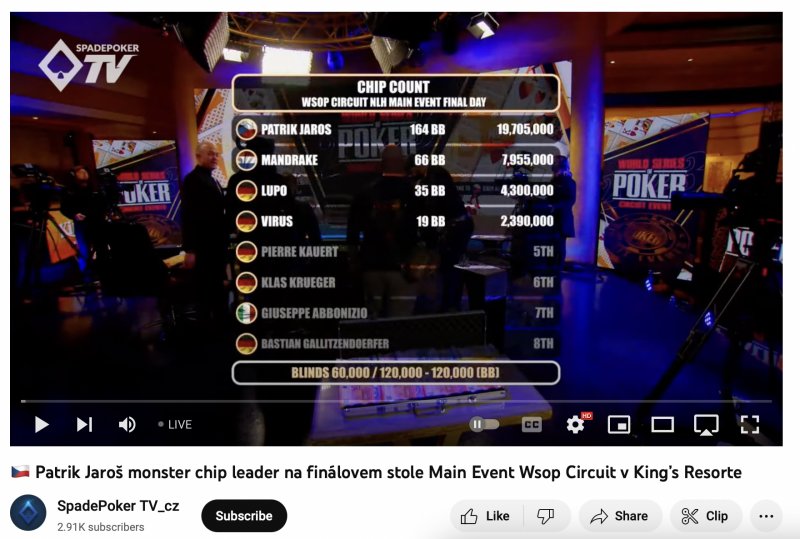 Livestreams of the WSOPC broadcast of the final table at King’s Resort were continued without a tainted hand that caused a player’s unwarranted exit. This is the very start of the continued broadcast. (Image: SpadePokerTV/YouTube)

This caused the first part of the final table broadcast to be removed.

So instead of owning up that a mistake was made, someone at King’s Casino decided to pull the plug, wiping the whole first half of the final table broadcast from today’s broadcast, before continuing.

But the Internet is forever, and a Twitter user posted the tainted hand:

Hand from the @WSOPC FT @PokerroomKings just 45 mins ago (+ stream delay). JTo player busts, no one including the dealer notices(?????), game and stream move on 🤯🤯🤯@PokerNews @ChadAHolloway pic.twitter.com/Geudu01fHP

There’s no doubt that mistakes happen, and while it’s easy to heap deserving blame on the dealer and floor personnel for what happened here, it’s a good reminder that the player is totally responsible for speaking up and protecting his hand.

But panicking and removing the stream right after a controversial hand is nothing but nonsense, and King’s Resort owes the poker world an explanation. CardsChat will update when the poker room releases a statement, if it does.

Another video of the hand, in case the Twitter link gets scrubbed.

King’s Casino’s Twitter shared a statement released by Federico Brunato, its “poker director.” Published on Facebook alongside a video of the hand, it reads in full:

I am sharing with you a very interesting situation that has occurred on one of our annual WSOPC events.

I am glad to have it documented on the livestream as it is something that happens very often during the games and is not talked so much about. With this post I want to raise awareness and give official piece of advice to our poker community.

To start with our poker dealers are very highly trained professionals that undergo a 6 week training course before entering their career paths at King’s. I myself have started as a poker dealer at King’s and know the work ethics.

The dealer in the clip is our dear Sona that has been a member of our family for the last 6 years. When it comes to the standard of our streams we do our maximum to ensure that it is at the highest possible level and accordingly Sona has been a constant member of our TV crew since her first steps in our team.

When it comes to the Hand number 35 of the final day of the WSOPC ME where Mr. Pierre Kauert was eliminated and cashed a stunning 58,000€ incl. a WSOPE ME ticket.

I would like to refer to one of the most important rules of poker – always read your hand. At the end of the day we are all humans and we all can make mistakes, Sona is no exception. Even though she has dealt thousands of successful hands in her life, this hand unfortunately she misread.

Nonetheless alongside with Sona, Mr. Pierre Kauert and all other competitors at the table misread the hand as well which of course is very unfortunate. The hand was supposed to be a split and we can now only guess how it would turn out in the Main Event path of Pierre Kauert, perhaps he would now be crowned a champion with a Golden Ring, perhaps he would be eliminated in the next hand.

At the end of the day I would like to refer to rule number 76. Of WSOP which states: The right to dispute a hand ends when a new hand begins. This applies not only to WSOP, but also to nearly all regular poker games that are played.

To take from this I strongly advise the poker community to not criticise other peoples mistake and not to try and find guilty, instead learn from this, know your rights and follow your game as every single occasion is individual in its own way.