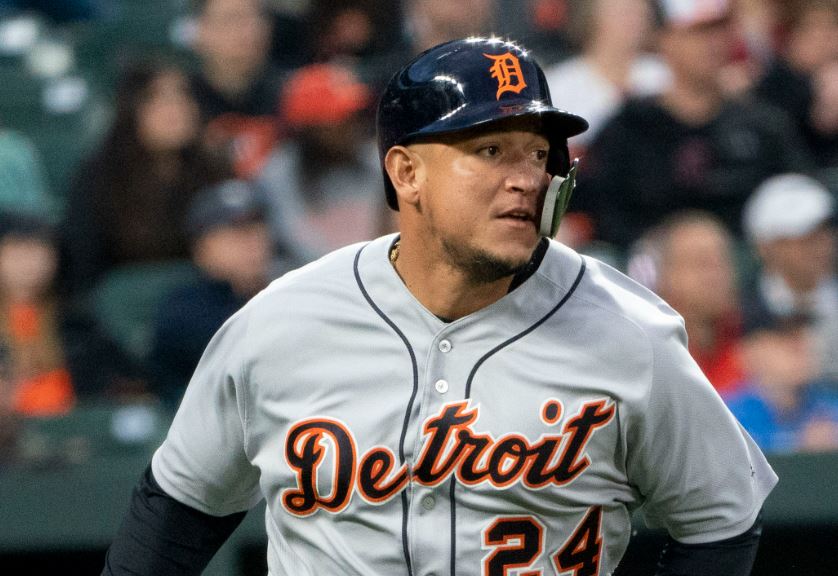 José Miguel ‘Miggy’ Cabrera was born on April 18th, 1983 in Maracay, Aragua State, Venezuela. He is the first baseman and designated hitter for the Detroit Tigers.

Since the minor leagues, Cabrera has been showing off his skills as an incredible baseball player.

Cabrera has been in the major leagues for almost 2 decades and during that time has been a part of the Florida Marlins and then the Detroit Tigers. In this article, we cover the successful career of Miguel Cabrera.

Make sure you keep up with MLB spreads to see how Cabrera is doing in the season.

Cabrera was signed to the Marlins in 1999 as an amateur free agent and played his first game in 2000 as a shortstop at the Gulf Coast League.

During his time in the amateur league, he was promoted to the Kane County Cougars, Jupiter Hammerheads, and the Caroline Mudcats.

He was seen to have the strongest arm in the Midwest League.

Cabrera made his debut with the Marlins on June 20th, 2003. His first major league game was against the Tampa Bay Devil Rays where he hit a walk-off home run. By July, Cabrera was called the Marlins’ cleanup hitter.

That season the Marlins won the World Series against the New York Yankees. Cabrera would receive Rookie of the Month honors in July and September and would feature on the cover of ESPN The Magazine during the offseason.

In 2005, Cabrera would win his first-ever Silver Slugger and become the youngest player in the history of the MLB to hit back-to-back seasons with 30 home runs.

Cabrera would have his first Home Run Derby in 2006 where he finished in third place.

In 2007, he would become the third youngest player to accumulate 500 RBIs. He finished that season with a career-high of 34 home runs, 119 runs batted in, and hitting a .320 average.

Cabrera was traded to the Detroit Lions on December 5th, 2007. He signed an 8-year, $152.3 million contract extension with them. At the time of the signing, it was the 4th largest in baseball history and the largest in the Tigers’ history.

He made his debut with the Lions on March 31st, 2008, and played his first game at third base. After that game, it was announced that Cabrera would move to first base.

That July he would receive his first All-American Player of the Month and would lead the American League in home runs with 37.

He would be named AL All-Star for the first time since joining the American League in 2010. The following year he would win his first AL batting title.

Despite moving back to third base, 2012 was one of Cabrera’s best seasons. He became the first Tiger to hit 30 home runs in 5 consecutive seasons and won AL Player of the Month in August.

That season will see Cabrera win the Triple Crown for the first time since 1967. He is the first Latin American to do so and the first third baser. He did so after leading the league with a .330 batting average, 44 home runs, and 139 RBIs.

That year he would be named Sporting News Player of the Year and All-American MVP.

The 2013 season would see him get AL Player of the Month for both May and August. He would also get his second consecutive Sporting News Player of the Year and AL MVP award.

Cabrera would also with his third consecutive batting title and win the ESPY award for best MLB player.

He would return to first base in the 2014 season and would sign an 8-year contract extension with $248 million with the Tigers.

Fan voting would see that Cabrera started at first base in the next All-Star game. That game he would hit his first home run in an All-Star game. Cabrera would be named AL Player of the Month in September of that season.

In 2014, Cabrera would receive his second consecutive ESPY award for best MLB player and his first nomination for the Golden Glove.

Cabrera would go against his former team, the Florida Marlins, in 2016. During that game, Cabrera would hit a home run earning him the distinction of hitting a home run against all 30 of the Major League teams. That season he would win AL Player of the Month for September.

In 2021, Cabrera would become the first-ever Tiger to hit 500 home runs and the 28th player in MLB history to do so.

As a player, Cabrera has set many records and defined himself as one of the greatest players of this century.

Throughout his career, he has been named All-Star 12 times, AL Player of the Month 6 times, and has won the Silver Slugger a total of 7 times.

Cabrera has been playing baseball for a long time and has had consistent play throughout most of it.