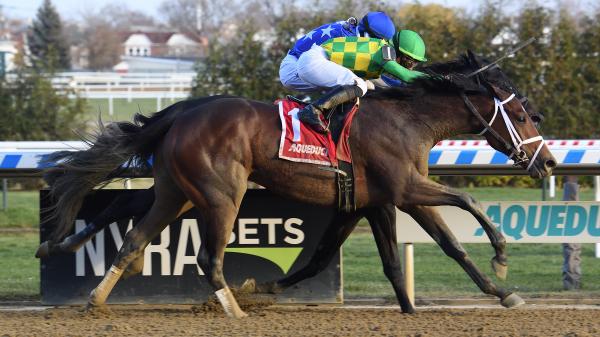 Just over one minute and 53 seconds worth of drama occurred during the $250,000 Grade 2 Remsen Stakes Dec. 4 at Aqueduct Racetrack and it continued in the minutes following it, but in the end, Mo Donegal was declared victorious following a stewards’ inquiry and rider’s claim of foul.

The 2-year-old Uncle Mo colt dueled down the stretch with slight favorite Zandon, finishing a nose in front of that rival, but only after the two horses and their riders competed in tight quarters late. Mo Donegal drifted inward from the center of the track under right-handed urging from winning jockey Irad Ortiz Jr., who nearing the wire, threw crosses with his left rein. He appeared to make contact with Zandon or that one’s rider, John Velazquez. The two horses also bumped just before the wire.

“We were down the lane fighting in a big race. (Velazquez) was riding his horse and I was riding mine,” Ortiz said.  “It was a good race and we got together a little before the wire, but it was a beautiful race. (Mo Donegal) tried his hardest and I did my best. We got lucky with the head bob and got there.”

Mo Donegal “should have come down,” said Chad Brown, trainer of the runner-up.

Velazquez noted that Mo Donegal “laid on top of me right before the wire and just beat me by very little.”

The connections of both can feel good about the potential for their colts as they continue racing next year as 3-year-olds. The winner earned 10 points and the runner-up four points in qualifying points toward next year’s Grade 1 Kentucky Derby Presented by Woodford Reserve at Churchill Downs.

It is the top two, however, that seem to be bonafide Derby prospects. Donegal Racing’s Mo Donegal closed at 37-1 in the first round of the Kentucky Derby Future Water last month, while Jeff Drown’s Zandon went off at 56-1. More than likely, their stock only rose with their efforts Saturday.

Both have room to improve. Mo Donegal seemed to idle after surging to the lead in midstretch with a stalking rally from fifth, while Zandon made just his first start in a route Saturday and was determined in a narrow defeat. Zandon raced three-wide in third position for the first three-quarters of the race, while Mo Donegal professionally tracked the pace inside behind horses before moving to the outside leaving the second of two turns.

“I thought he ran great,” winning trainer Todd Pletcher said of his charge. “He was getting a good, ground-saving trip and put himself in a good spot. He kind of had to angle out a little bit and lost some ground there but it looked like when he got there he is still trying to figure out how to polish it off. The other horse battled back.”

“We got beat an inch,” noted Brown about Zandon. “I thought we had the best horse in the race, so it’s disappointing. But he’s a nice horse so we’ll get him going and train him towards the Derby.”

Donegal Racing won its second Remsen after first victorious in 2011 with the Dale Romans-trained O’Prado Again, while Pletcher tallied his third score in the late-season 2-year-old contest. The Hall of Fame trainer previously captured the race in 2012 with Overanalyze and in 2005 with Bluegrass Cat for different owners.

Ortiz won his first Remsen, one of three stakes wins for him on the Saturday card at Aqueduct.

Bred in Kentucky by Ashview Farm and Colts Neck Stables, Mo Donegal is the first stakes winner from the young Pulpit mare Callingmissbrown. Of her three foals, both of her starters are winners, and the other is a yearling filly by Into Mischief.

The Remsen winner was a $250,000 purchase by Jerry Crawford for Donegal Racing from the consignment of Ashview Farm during the 2020 September Yearling Sale at Keeneland. The colt has won two straight after a third-place finish in his debut and now has earnings of $197,800.

“I can’t say enough for the job Todd’s done with him,” said Crawford, CEO of Donegal Racing, who celebrated his 40th wedding anniversary Saturday with his wife Linda. “The horse doesn’t even look like the same horse. He’s really come a long way, and Todd and Irad (are) a pretty good team to put your horses in the hands of.”