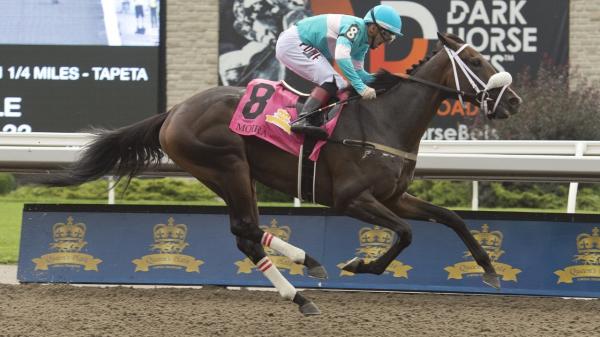 The fictional Moira Rose, played by Catherine O’Hara for years on the popular sitcom “Schitt’s Creek,” was a spoiled, eccentric, and overly dramatic character.

Her namesake, the talented 3-year-old filly Moira, also has her own unique personality traits, particularly in the lead-up to the race, such as in the paddock. When racing, however, she is simply all class.

Running Aug. 21 in the iconic $1 million Queen’s Plate Stakes at Woodbine, she put on a display to match her 10 ¾-length victory last month in the Woodbine Oaks Presented by Budweiser, rolling to a seven-length victory over Hall of Dreams in the 163rd edition of the Canadian classic. Her 1 ¼-mile time of 2:01.38 on Woodbine’s synthetic Tapeta surface established a track record and was the fastest at that distance in the race’s storied history (the Queen’s Plate was held at a mile and a quarter from 1887-1923 and again from 1957 to the present).

Moira, a daughter of Ghostzapper, became the 38th filly to win the Queen’s Plate and 10th since 1962. She is Ghostzapper’s third winner of the Plate after victories from the colt Shaman Ghost  (2015) and the filly Holy Helena (2017).

She provided her Canadian trainer, Kevin Attard, with his first Queen’s Plate, a race widely and often called Canada’s Kentucky Derby. All of the 3-year-olds in the Plate must be born in the country.

The race also gave Canadian-born bloodstock agent Donato Lanni a coveted victory as an owner. Moira was part of a group of horses he selected to race for the X-Men Racing partnership he heads with Madaket Stables and SF Racing.

“I’ve known Kevin for 20 years, and this has been a dream –a dream of his, mine – being two Canadian boys to win this race,” said Lanni, whose wife, Elizabeth, named Moira. “This is unbelievable. What a filly.”

Moira made the Plate look easy after she left the paddock, where Attard and his staff kept her away from other horses, knowing her history of paddock misbehavior. She then led a field of 10 males onto the racetrack from the paddock tunnel.

Once the race began, she let the boys have their turn for the first three-quarters of a mile, settling toward the rear half of the field as The Minkster set the pace with fractions of :23.75, :47.58, and 1:11.85.

But jockey Rafael Hernandez was simply biding his time on Moira, and when she was given her cue on the outside on the second turn, she quickly displayed her superiority. Seventh after six furlongs, she vaulted into third a mile into the race and was in front soon after. Moira hit the midstretch marker three lengths in the lead and widened her margin to the finish despite Hernandez not urging her and pumping his fist in celebration over the final 70 yards. She paid $5.60 to win.

“She’s something else. She is so special,” said Hernandez, who won his second Queen’s Plate after his initial success with Shaman Ghost in 2015.

Hall of Dreams rallied from 10th early to grab second, two lengths ahead of a stalking Sir for Sure in third – giving two-time Plate winner Mark Casse a 2-3 finish. Ironstone, who chased The Minkster for much of the race before taking a brief lead at the mile marker, was fourth.

Wando, in 2003, was the last horse to sweep the series and the seventh since its inception in 1959.

Attard stopped short of committing Moira to the upcoming legs, though he seemed intrigued by the pursuit. She has not raced on dirt and turf, having run exclusively on Woodbine’s Tapeta.

“Being a local trainer, I would love to put my name beside a Triple Crown horse if I could, right?” Attard said.