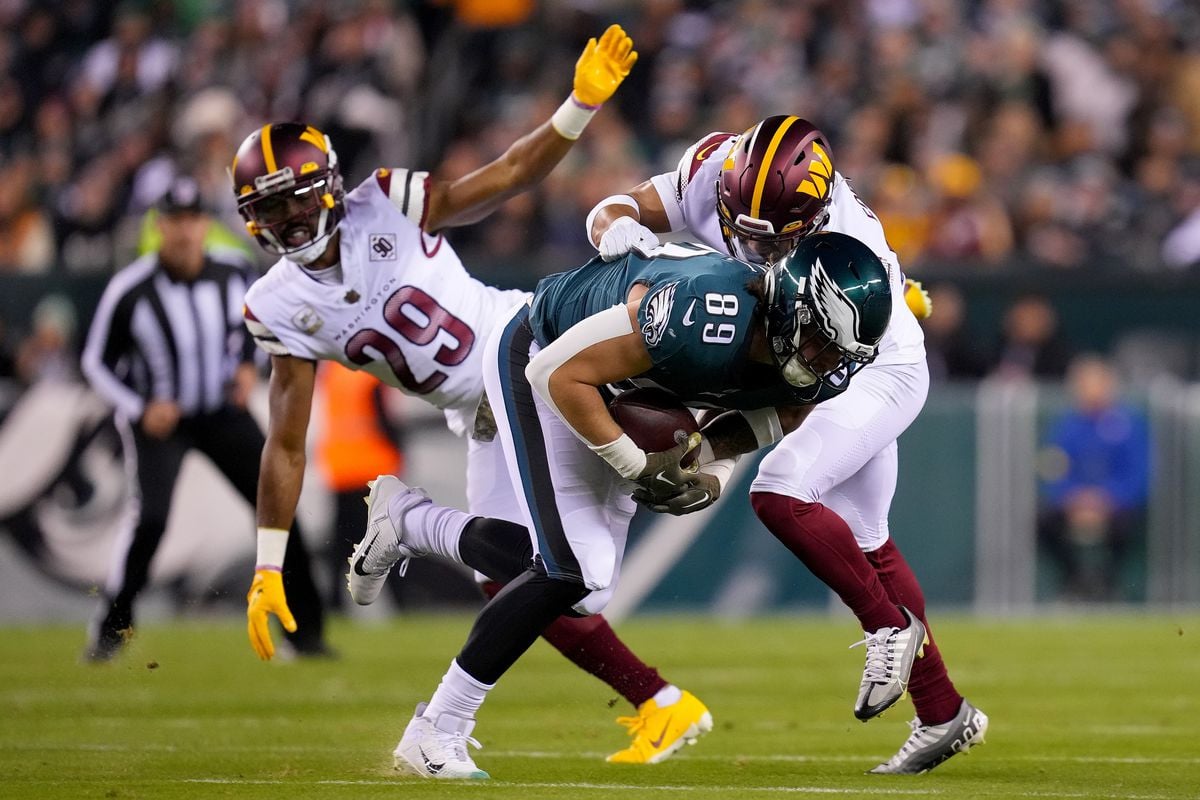 Not since 1972 has an NFL team completed a season without suffering a loss. That reign continues as the Washington Commanders celebrate an underdog win against the now-broken Philadelphia Eagles in Monday Night Football.

While the NFC East-leading Eagles fell to 8-1 with the decisive 32-21 loss, the Commanders improved to 5-5. They are now in a real position to fight for a wild card spot in the postseason.

The Eagles took a 14-7 lead late in the first quarter when Hurts hit tight end Dallas Goedert for a touchdown. That’s when the Commanders came alive.

The Commanders counted on QB Taylor Heinicke, and his return to the starting lineup has breathed life into this team. Washington has gone from a team that trudges through every game to a synchronized machine that plays with passion and the confidence that they’ll win.

While his numbers on Monday aren’t overwhelming, 17 for 29 for 211 plus an interception, Heinicke was on target when it counted. After the Eagles forced a turnover that led to a TD just minutes into the game, the QB stayed on point until the Commanders’ last drive.

Knowing the Eagles were without rookie defensive tackle Jordan Davis, the Commanders focused on the ground game. The running back duo of Brian Robinson Jr. and Antonio Gibson combined for 130 rushing yards on 40 carries, including two trips to the end zone.

Washington finished the game with 152 rushing yards. The Commanders also controlled the clock, racking up over 40 minutes of possession to the Eagles’ 19 minutes.

As the game progressed, the 14-7 deficit turned into a 23-14 lead thanks, in part, to the perfect aim of Joey Slye (and perhaps a few missed penalties). Throughout the contest, he made kicking field goals look like child’s play, nailing a career-high 58-yarder and adding a 55-yard bomb that split the uprights.

The Eagles mounted a return that brought them to within two points. The Washington defense did its job, though. It picked off players, forced QB Jalen Hurts out of the pocket and never let up. The Commanders punctuated the performance by picking off a desperate Eagles offense as time expired and hitting the end zone for another six.

Biggest Upset Of the Year

The Eagles were 11-point favorites going into the game, the third time this season they’ve had a double-digit advantage. After underdogs continue to score big wins this season, perhaps it’s time to adjust the math.

BetMGM and Caesars had the Commanders at +400 to win last night, which means they stood to make serious losses. Caesars reported that a bettor put down over $15,000 on the moneyline, which resulted in a win of $62,400.

However, most of the money went on the Eagles to win, and rightfully so. Hurts was 4-0 straight up as a starter when Philadelphia had a line of 10 points or more. Therefore, after someone at BetMGM wagered $331K on the Eagles, the sportsbook breathed a sigh of relief and thanked them for their business.

The Commanders next face the Houston Texans, who sit at the bottom of the AFC along with the Las Vegas Raiders. The Eagles will face the Indianapolis Colts as they look to avenge yesterday’s loss.

2022-11-15
Previous Post: The Turk Takes First at WSOPE, Brazilians Do Well in Online Event
Next Post: Further Adjustments Are Made to Macau Junket Law Before Approval in December