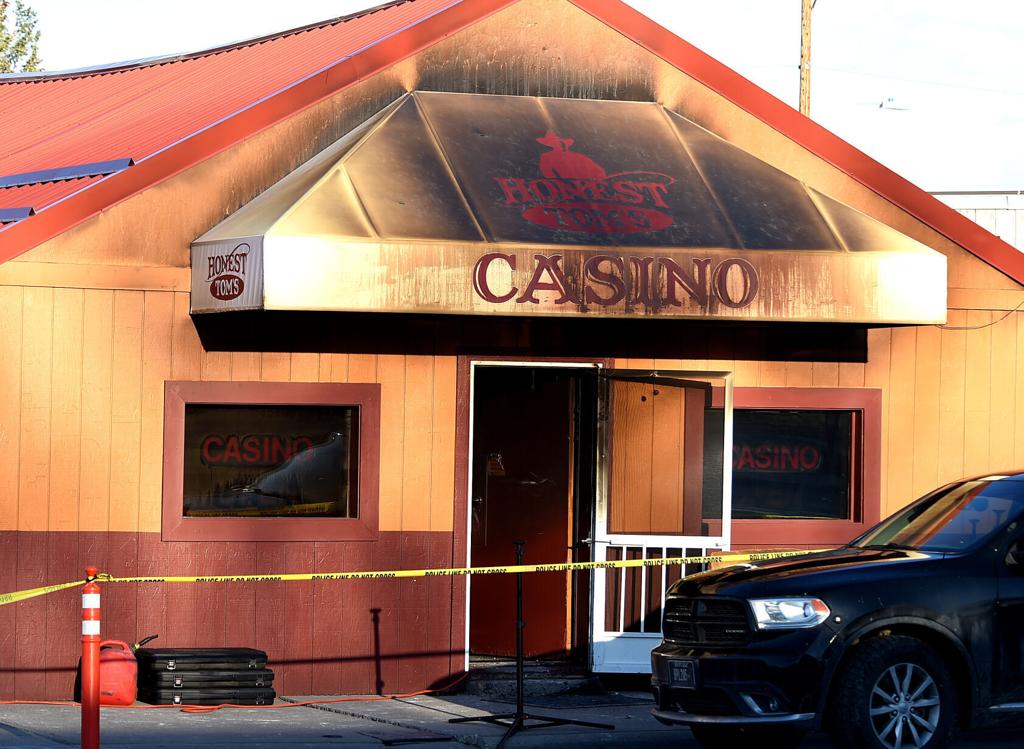 The Bridger, Montana fire which led to the deaths last month of two people in Honest Toms Saloon & Casino is now being investigated as a possible homicide. Autopsy results have to be released.

The burned exterior of Honest Toms Saloon & Casino, pictured above. The investigation into last month’s fatal fire is leading Montana officials to consider whether it was a homicide. (Image: Billings Gazette)

Word about the homicide inquiry was announced today (May 4) by Carbon County Sheriff Josh McQuillian, according to a report from MTN News, a Montana news site.

However, last month McQuillan said the April 20 deadly casino fire was not believed to have been set, according to KTVQ, a local TV station.

But the investigation into the circumstances surrounding the fire continued. The Carbon County Sheriff’s Office and the Montana Division of Criminal Investigation have undertaken the inquiry.

The Honest Toms fire led to finding Marla Murray, 71, and John Ahles, 33, inside the building. Both were deceased.

Murray was an employee and she was working at the time. Ahles also worked at the casino. But he was off-duty that night, MTN News said.

The two victims were alone in the building during the fire. Both resided in Bridger, the same community in which the casino is located.

Since the blaze, Honest Toms was closed by its owners. The small building was described by McQuillan as a “total loss” because of smoke damage, the Associated Press reported last month.

When firefighters arrived, they were unable to enter the burning building because of heavy smoke, the AP added. The first to arrive, Bridger Police Chief Mike Buechler, said he found smoke billowing out of the front door, KTVQ, a local TV station, reported.

He yelled out to see if anyone was inside, but no one answered. He was able to open a screen door. He could only see a couple of feet inside because of the smoke.

Multiple fire departments responded to the fire. They were able to bring the fire under control in about a half-hour.

The casino is located on the main thoroughfare through the southern Montana town. Bridger is a small community located about 47 miles south of Billings, Montana.

In March, a slot machine at Bally’s Twin River Lincoln Casino Resort in Rhode Island caught fire. The March 8 fire was caused by a machine malfunction. It was quickly contained to the casino floor. The blaze did not cause any significant damage, nor was anyone injured.

In an earlier incident, Resorts World Las Vegas on the Las Vegas Strip was the site of a fire last June. It took place before the property’s grand reopening. The blaze broke out in a storage area.

2022-05-05
Previous Post: Phil Hellmuth Savaged for Angleshooting Newbies on Hustler Casino Live
Next Post: Another final for The Ferret