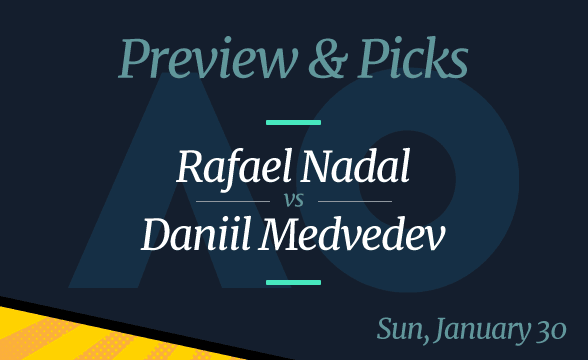 Australian Open. Winning the tournament is a great motivation for both players, but each of them is coming to Rod Laver Arena with some extra incentives.

For Nadal, winning the tournament would mean getting the lead in the GOAT debate. By beating Medvedev on Sunday, he would become the only player to have 21 Grand Slam trophies in the collection – one more than his biggest rivals Novak Djokovic and Roger Federer.

When it comes to Medvedev, winning the 2022 Australian Open would mean collecting the whole 2,000 ranking points and getting to the top of the ATP List.

One More Win to Make History

Nadal is just one win away from making history. If he wins on Sunday, he’ll get to his record 21st Grand Slam title. As he’s already 35 and coming off an injury-plagued season, it’s likely that he’s not going to get too many chances to do so in the future.

The trouble is that even without two of his biggest foes being out of the tournament, winning the trophy is going to be really hard. After all, he’s locking horns with the world’s second-highest ranked ATP player.

On the bright side for Nadal, he’s been playing top tennis since coming to Australia. In fact, he started the year by winning the ATP Melbourne, beating each of his opponents in straight sets.

Then, in the 2022 Australian Open, we saw Nadal defeating a couple of pretty tough opponents, including two from the ATP Top 10 – Denis Shapovalov and Matteo Berrettini.

Still, his biggest challenge surely is going to be Daniil Medvedev, even though the Russian hasn’t been too impressive so far.

So far at the Australian Open, Medvedev won only two matches in straight sets. Those matches were against players who are ranked under the 50th spot. When playing against players from the Top 10, he didn’t do great.

For instance, it took him nearly five hours to defeat the ATP #9 Felix Auger-Aliassime. Then, in the semifinal, he defeated Stefanos Tsitsipas in two and a half hours.

He was more dominant in that match, but what should worry his fans is that Medvedev was very nervous. Actually, he even once burst out at the empire, asking him if he were stupid.

That wasn’t the first time Medvedev behaved badly at the Australian Open. Against Nick Kyrgios in Round 2, he said some members of the audience had “low IQ”.

It’s needless to say that all this has made the crowd dislike him, meaning that his opponent is going to get much more support in the final. But, will it be enough to take Nadal to his second Australian Open title?

It might as the Spanish player will probably need a morale boost. He has the skills and the experience to defeat Medvedev, but his stamina isn’t as good as Medvedev’s. Still, with fans on his side, Nadal might be able to push through pain and tiredness.