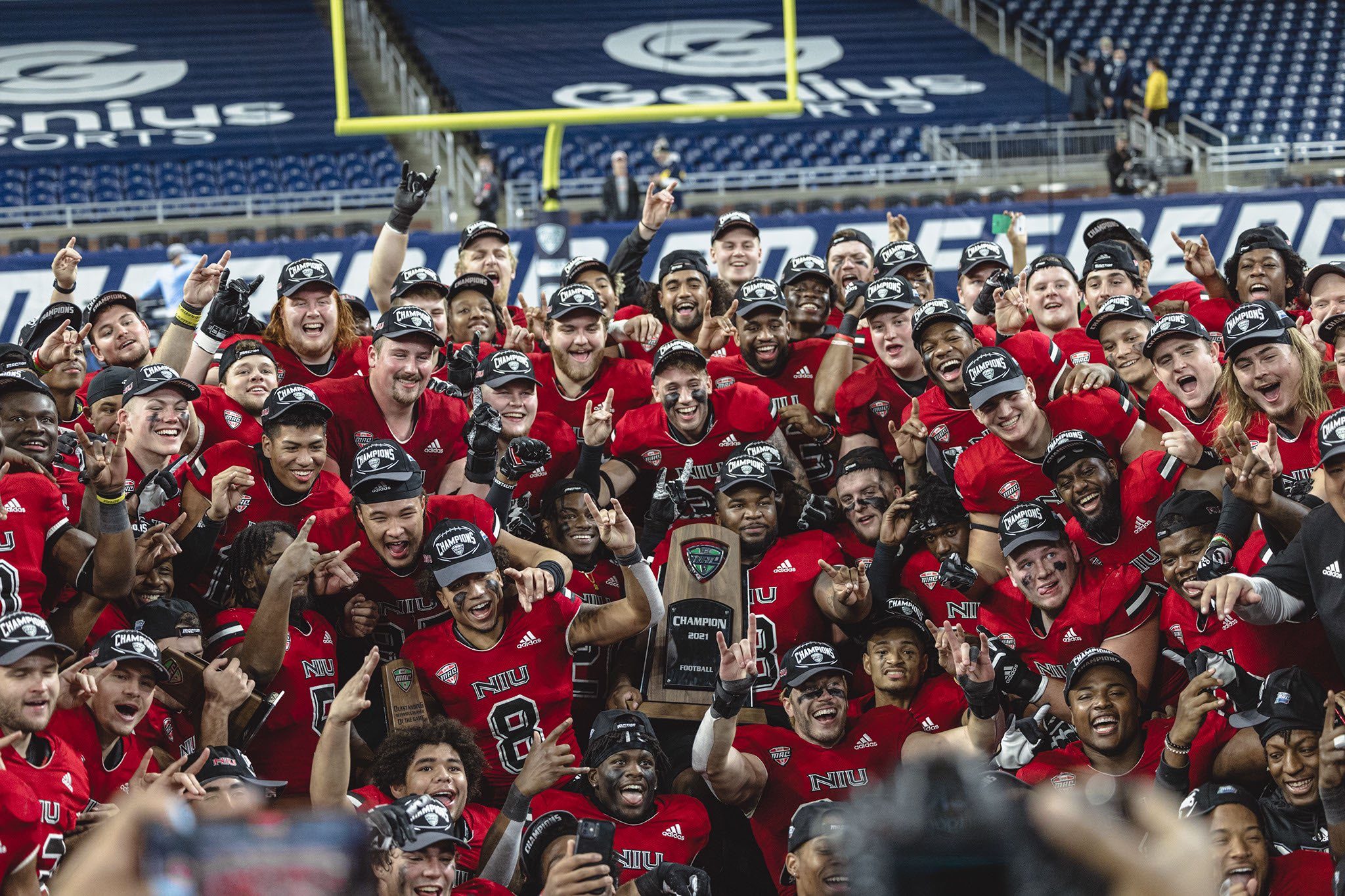 NCAA to Allow Conferences, Colleges to Share Stats with Sportsbooks

The relationship between college athletics and sportsbooks is showing signs of thawing. Earlier this week, Sportico reported the NCAA notified member schools that statistics available to the public can be also provided to sports betting operators.

The Northern Illinois University football team celebrates winning the 2021 Mid-American Conference Championship on Saturday, Dec, 5, 2021 at Ford Field in Detroit. The conference, which has a partnership with Genius Sports, asked the NCAA for clarity on sports betting guidelines, and according to a Sportico article this week, the NCAA issued new guidance to conferences and schools that may open doors for colleges and conferences to share data with sports betting operators. (Image: NIU Football/Twitter)

The move is seen as a way conferences, individual schools, or others could work with companies like Genius Sports and Sportradar to sell data sportsbooks.

That would put college athletics on par with the major professional sporting leagues that have partnered with those companies. The NCAA was a plaintiff along with MLB, NBA, NFL, and NHL in suing the state of New Jersey to block it from implementing a sports betting law. That lawsuit, of course, eventually led to the repeal of PASPA nearly four years ago.

Since then, the major pro leagues and several teams have entered into partnerships with sports betting operators, a move only a handful of colleges have undertaken – such as LSU and the University of Colorado.

The Sportico article noted the NCAA’s action came in response to a request by the Mid-American Conference (MAC), which sought clarification regarding the organization’s position on sports betting.

Last month, the conference – considered a mid-major or a step below the Power 5 conferences – entered into a partnership with Genius Sports. The move allows Genius Sports to manage and distribute the stats for the MAC’s 24 sports. Genius Sports also agreed to oversee an audit of the conference’s integrity protocols. The conference will also benefit from Genius Sports’ monitoring services and workshops the company will put on for both conference officials and the member schools.

This partnership will permit us to exert greater control of our statistics, provide increased oversight over events through the utilization of integrity services and provide support and financial benefits for the Conference and its membership,” MAC Commissioner Dr. Jon A. Steinbrecher said in a statement announcing the partnership. “We have the responsibility to manage our assets and leverage those assets for the benefit of the student-athletes and our member institutions. The partnership with Genius Sports will assist us in those efforts.”

The partnership will also let Genius Sports create free-to-play games for the conference’s events to enhance the “fan experience,” according to the release. The goal behind that is to transform “passive” watchers into “highly interactive customers.”

How Much is Bet on College Sports?

While neither the NCAA nor the majority of its members have been as aggressive in partnering with sports betting operators or other stakeholders in the industry, college sports still commands a significant share of the sports betting action in the US. That includes the NCAA men’s basketball tournament, which is one of the biggest sports betting events in the country.

Few states break down just how much is wagered on college sports. However, Colorado does. In a release earlier this month, the Colorado Department of Revenue reported that NCAA Basketball games generated $96.9 million in bets in March. That represented 19.2 percent of the $505.6 million bet in the state for the month. Only NBA basketball commanded more action.

The Illinois Gaming Board (IGB) also reported data on the men’s and women’s college basketball tournaments, which were completed earlier this month. Combined, the two three-week tournaments generated $286.2 million in bets, with the men’s tourney attracting $278.4 million of the wagers.

The sportsbooks won $14.3 million from bets on the tournament games, and the IGB estimated the state tax impact at $2.1 million