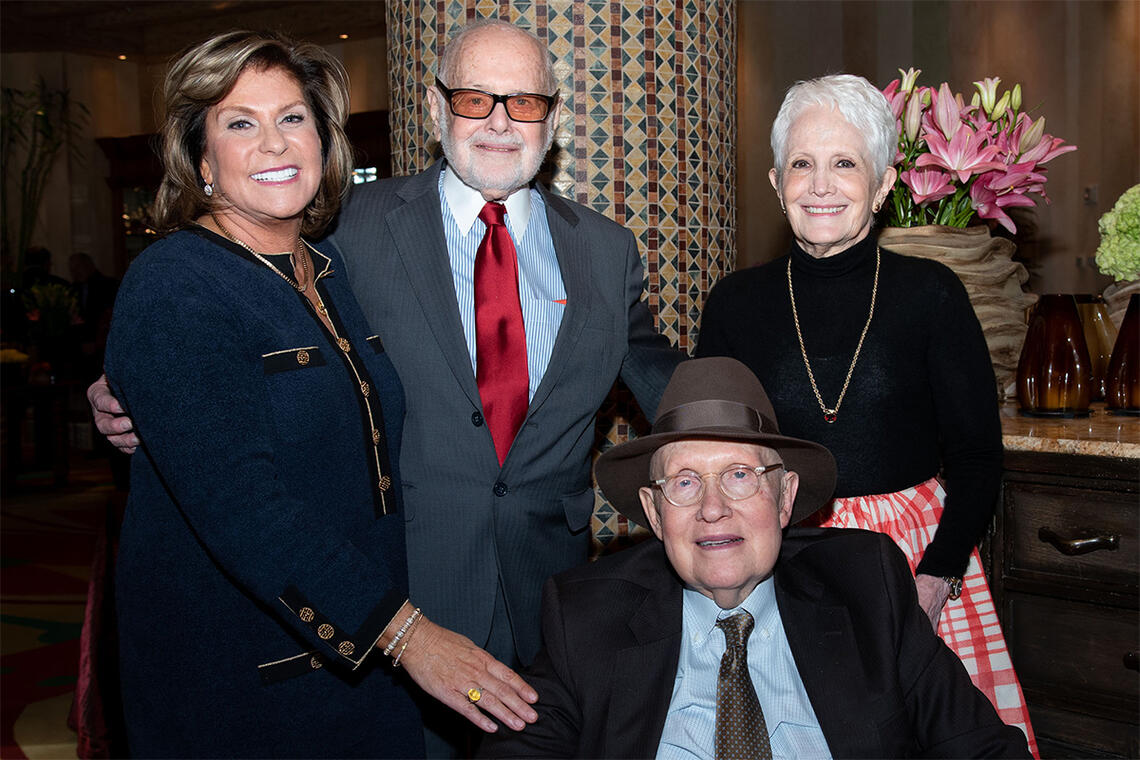 Preeminent Nevada attorney Samuel “Sam” Lionel passed away on Friday at the age of 103. He was remembered this week as the dean of the Nevada bar.

Attorney Samuel Lionel (second from left) and his wife Lexy (left) with US Sen. Harry Reid (seated) and his wife, Landra Gould Reid. Samuel Lionel passed away last week and was recalled for his prominent legal career. (Image: UNLV)

Lionel practiced law until he retired at the age of about 100. For decades, he and law firm colleagues represented many of Las Vegas’s casinos and hotels.

Among his clients were Del Webb, who built the Flamingo, and Paradise Development. Moe Dalitz was a senior founding member of that real estate business. Other clients were Howard Hughes and Kirk Kerkorian, who was a principal of the MGM hotels.

In a tribute presented on the floor of the US Senate in 2019, Sen. Jacky Rosen said Lionel “played a key role in the conception and development of many of the hotels and casinos on the Las Vegas Strip, setting the stage for Nevada’s unprecedented growth and its booming entertainment scene.”

“If there was one person responsible for elevating the practice of law in Nevada after World War II it was Samuel Lionel,” John Mowbray, managing partner of Spencer Fane’s Las Vegas office and past president of the Nevada Bar Association, recalled to Casino.org. “Nevada has just lost one of its legends to the ages, the dean of our Nevada bar.”

While Sam concentrated his practice on litigation and appellate matters, including those involving his casino and hotel clients, his partner and dear friend, Bob Faiss, led the regulatory department that represented major gaming clients in their regulatory affairs,” Morgan added.

When Morgan arrived in Las Vegas in 1997 to found the Boyd School of Law, “I quickly learned that Sam was regarded as the dean of the Nevada legal profession.”

On a 50-year-old map, you could point out almost any Strip casino, and chances are, they were Lionel Sawyer’s clients,” Cabot, now a distinguished fellow in gaming law at UNLV’s law school, told Casino.org.

He remembers Lionel as “the consummate lawyer and an eminent scholar. Sam’s breadth of legal knowledge intimidated us as young attorneys.”

He would regularly visit the offices of the younger lawyers. He was interested in what they were working on.

“Everyone became better lawyers because of his expertise and interest,” Cabot said.

In Las Vegas, Sam was the attorney clients turned to when they had serious problems. These are what some call ‘bet the company’ issues,” Cabot added.

He also was one of the philanthropists behind the creation of the UNLV law school. He supported Nevada’s Jewish community, too.

He served in the US Army during World War II. After practicing law in New York City, he joined the Army Judge Advocate General’s office. He also taught at the United States Military Academy at West Point.

He then decided to relocate to Nevada in 1953. Soon, he started his legendary legal career.

In addition to his wife, Lexy, Lionel is survived by his daughter, Dana.