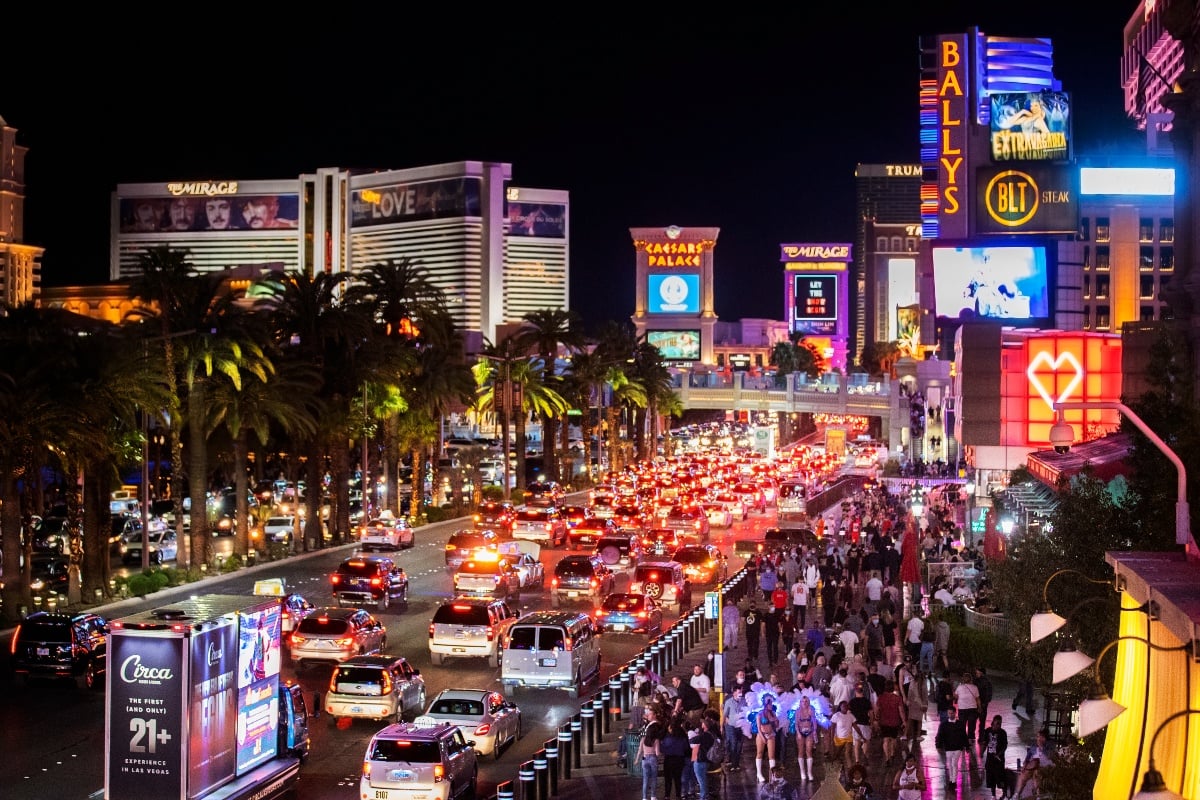 Nevada Casinos Post Record May Win, But Slowdown Could Be Imminent

Nevada casinos have won at least $1 billion in each of the past 15 months. The unprecedented streak was not in much jeopardy in May, as gross gaming revenue (GGR) easily eclipsed the 10-figure mark to nearly $1.4 billion.

The Las Vegas Strip is packed with vehicles and pedestrians. Nevada casinos won at least $1 billion in each of the past 15 months, a record streak that might soon end because of inflation and soaring gas prices. (Image: AP)

The $1.38 billion won last month by Nevada casinos represents the best May ever for the state’s regulated gaming industry, which dates back to 1931. Nevada’s casinos and gambling establishments fared 5.7% better than they did in May 2021.

The Las Vegas Strip fueled the surge, as the world’s richest gaming drag welcomed an abundance of guests in town for special events. Las Vegas in May hosted the highly anticipated Canelo Alvarez vs. Dmitry Bivol boxing match at T-Mobile Arena, and the Electric Daisy Carnival music festival returned at the Las Vegas Motor Speedway.

The big crowds kept Strip and downtown Las Vegas casinos busy throughout the month. Despite having one less weekend day in May ’22 compared with May ’21, Strip casinos won $731.5 million, almost 12% higher than a year ago.

May could be the end of Nevada casinos experiencing record gaming action in wake of the pandemic, as a new threat to the national economy and leisure spending has arrived. Along with record gaming being experienced in 2022 not only in Nevada but several other states, including New Jersey, Pennsylvania, Maryland, Michigan, and Ohio, record inflation has emerged nationwide.

With costs higher for nearly all essential goods, highlighted by ongoing pains at the gas pumps, travel experts believe Americans will — or perhaps already have — rein in their spending. Comerica Bank Chief Economist Bill Adams says casinos and hospitality segments are most prone to inflation, as such non-essential activities are typically first to be hit as Americans tighten their wallets.

A new report issued to Casino.org this week by data intelligence agency Morning Consult suggests a pullback in leisure spending is underway and/or imminent. The firm says 43% of Americans plan to travel less this summer than they did in 2021.

Perhaps even more worrisome is that Morning Consult found that the travel pullbacks are most significant among high-income households. Just 31% of families earning more than $100,000 annually said they will make more than one summer trip. Last year, 44% of that demographic planned to embark on more than one summer voyage.

Fewer visitors in Las Vegas and across the state will likely hurt GGR, especially considering that more $100k+ earners are opting to stay at home after one summer vacation.

Though leisure travel to Las Vegas might wane in the coming months, casinos could partially offset those losses with the ongoing return of convention business. Though Nevada casinos won over $13.4 billion in 2021 — an all-time record — convention traffic remained less than one-third of 2019 volume.

Inflation’s impact on conventions and exhibitions isn’t expected to be as severe as leisure business.

Notable trade gatherings in June included the audiovisual InfoComm exhibition and its nearly 20,000 attendees, the jewelry industry JCK Show and its 18,000 attendees, and the 2,000 people who traveled in for the Travel Agent Forum.