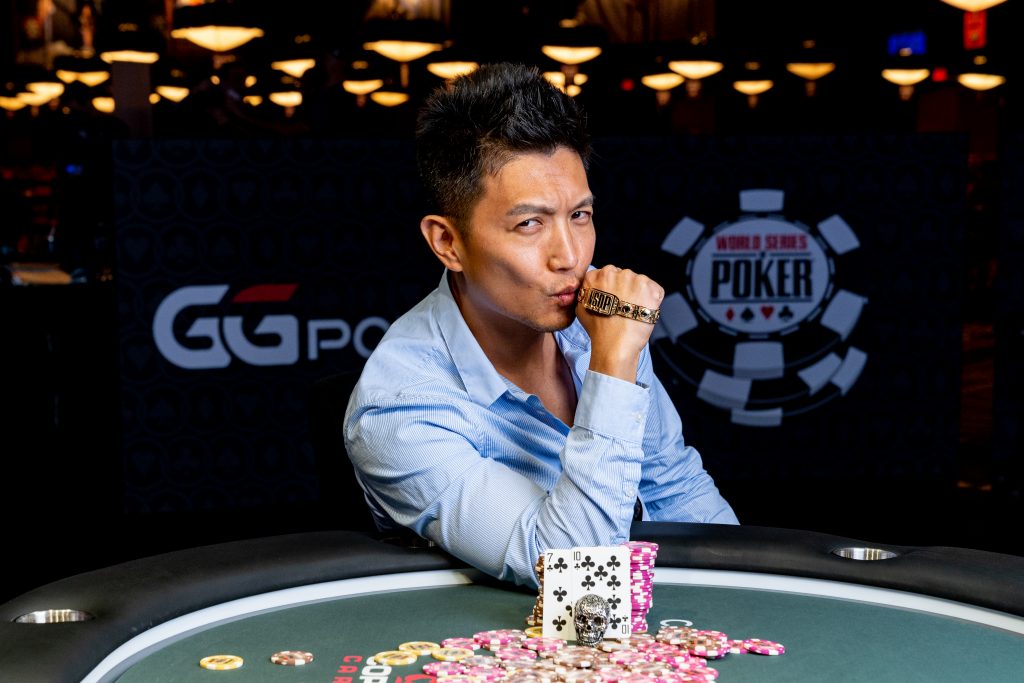 Nevada Players Lead the Bracelet Race, International Players Not Much of a Factor So Far

While it may not be the usual poker summer camp that many players are used to, the 2021 World Series of Poker has drawn a steady influx of professionals and amateurs to Las Vegas over the past month, proving that players from across the US and beyond are still eager to ante up for their shot at WSOP glory. And, with the US government planning to lift a number of COVID-related travel restrictions on Monday, Nov. 8, WSOP officials are hoping a late influx of international players will make their way to the Rio before the series ends.

Carlos Chang of Taiwan is one of the many international players who made it to the 2021 WSOP where he won his first bracelet. (Image: WSOP)

Using data provided by the WSOP, we’ve determined that players from 43 different US states and territories, and 31 different countries have made final tables through 52 events, including the online bracelet tourneys. That’s quite the melting pot, considering that many potential players were reluctant to travel this fall because of COVID the WSOP’s own rules surrounding the pandemic.

The Golden State is golden

California players have won the most bracelets so far this fall with 13, while Nevada-based players have six. Despite this discrepancy, players who make their home Nevada actually have the most finals table appearances at 64, with California residents coming a close second with 58. Palo Alto, California resident Phil Hellmuth accounts for five of those final table appearances all by himself.

Outside of the US, players from Canada have reached 20 final tables so far this year, though those statistics can be confusing. Daniel Negreanu, for example, is a longtime Las Vegas resident Daniel Negreanu who even became a US citizen in 2016 in order to vote in the Presidential election. Even so, the WSOP lists Negreanu, a Toronto native, as a Canadian player. He counted for two of that country’s final tables so far this season.

March 12th is my citizenship ceremony as I officially become a US Citizen. I felt it was important to get it done in time to cast my vote!

Players from booming poker markets in Florida and Texas are all well-represented at this year’s final tables, with 26 and 24 appearances, respectively. Two players from Florida won bracelets, while one player from Texas earned some jewelry. New York players have 20 final table appearances so far, but no New Yorkers has taken home a bracelet yet this year.

While players from West Virginia technically racked up four final table appearances so far during this WSOP, three of those results are credited to Jason Koon who also claimed the state’s only bracelet so far this series.

Even though the COVID travel ban remains to be lifted, a number of international players have had strong showings so far in Las Vegas. As of this writing, players from Israel, Japan, Taiwan, Australia, Lithuania, the Czech Republic, Canada, and France have all won bracelets. Canadians players lead the international contingent with three bracelets, followed by players from Israel and Taiwan, who have each scored twice, respectively. No other country has produced more than one winner so far this year.

Joao Vieira, a longtime pro from Portugal, made two live final tables at this year’s WSOP, along with a 10th-place finish in the $10K Dealer’s Choice event. Meanwhile, Jose Paz-Gutierrez is credited with making two of the three final table appearances for players hailing from Brazil.

The final table of the $800 Eight-Handed NLH Deepstack event stood out with only one American making the final eight. Israeli Ran Koller beat countryman Ran Ilani heads-up as well as two Canadians, a Frenchman, a Russian, an American, and a Panamanian.

With 25 events remaining, including the Main Event, it’s likely that even more players could add some international flair to the remainder of this year’s WSOP.