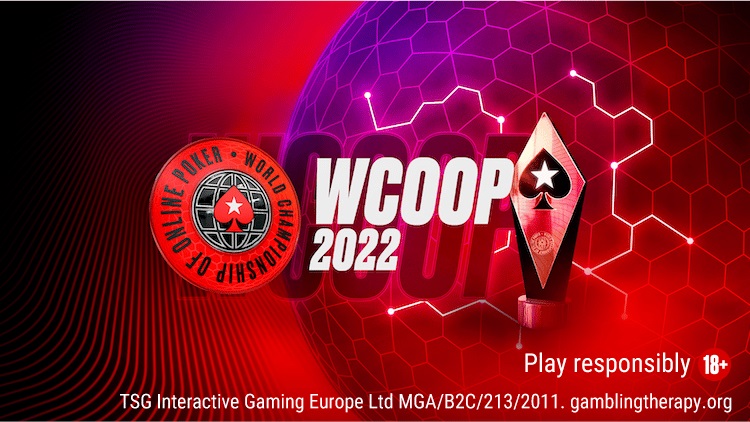 PokerStars WCOOP 2022 will run from Sept. 4 to 28 and, according to the recently released schedule, it will offer a total guaranteed prize pool of $85 million.

PokerStars released its WCOOP 2022 schedule and, this year, players can compete for a total guaranteed prize pool of $85 million across 312 events. (Image: PokerStars)

PokerStars confirmed the dates for its 2022 World Championship of Online Poker in July and now, with just over two weeks to go, the schedule has been released. Topping the bill are three main events costing $109, $1,050, and $10,300, respectively (the $10,300 main event will also be classed as a world championship). Combined, these tournaments have a guaranteed prize pool of $11.5 million. However, they won’t be the only marquee events this year.

In an effort to make the 21st WCOOP as enticing as possible, PokerStars’ tournament team has added 12 “World Championship” events to the schedule. These events are designed to “test all poker disciplines” and will cost between $1,050 and $10,300.

Between the main events and WCOOP championship MTTs, poker pros have plenty to look forward to, but what about everyone else? As it’s been since the first WCOOP in 2002, entry fees will range from low to high.

Low buy-in WCOOP events start at $5.50, while medium buy-in MTTs start at $55. At the upper end of the spectrum, high buy-in events cost as much as $25K. With 104 tournaments across all buy-in levels, players will have a total of 312 opportunities to win a title between Sept. 4 and 28.

While impressive in and of itself, the $85 million guarantee could well be broken if last year’s WCOOP is anything to go by. With poker players from 42 countries generating 1.4 million registrations over 306 tournaments, WCOOP 2021 paid out a record-breaking $122 million.

The addition of new events could see more records fall in 2022, but WCOOP will have to share the limelight with GGPoker’s WSOP Online. The first of 33 WSOP bracelet events got underway on Aug. 14 and the festival as a whole will run until Sept. 27.

Like WCOOP, WSOP Online features a combination of low, medium, and high buy-in events. Entering events on both sites is possible for players in Europe, the UK, and South America. However, with large guarantees and bracelets on the line, focusing on one or the other might be necessary.

This isn’t the first time PokerStars and GGPoker have clashed on the tournament front. In fact, it’s not the first time this year. GGPoker launched a rival micro-stakes series in June. GGPoker’s microMILLION$ took place in July, at the same time as PokerStars’ MicroMillions.

Both series were popular but, despite PokerStars adding more money to the total guarantee midway through due to greater-than-expected support, GGPoker paid out the most money (over $5 million).

WCOOP and WSOP Online 2022 aren’t as similar as the two micro-stakes series, but they’re close enough that it’s another chance to see which operator currently has the upper hand. Whichever poker site comes out on top, players will be the real winners this September thanks to a packed, and lucrative, schedule of events.

2022-08-16
Previous Post: NFL Defensive Rookie of the Year Odds for 2022
Next Post: Two Weeks To The Travers: Rich Strike, Reed Settle In To Life In Saratoga – Horse Racing News