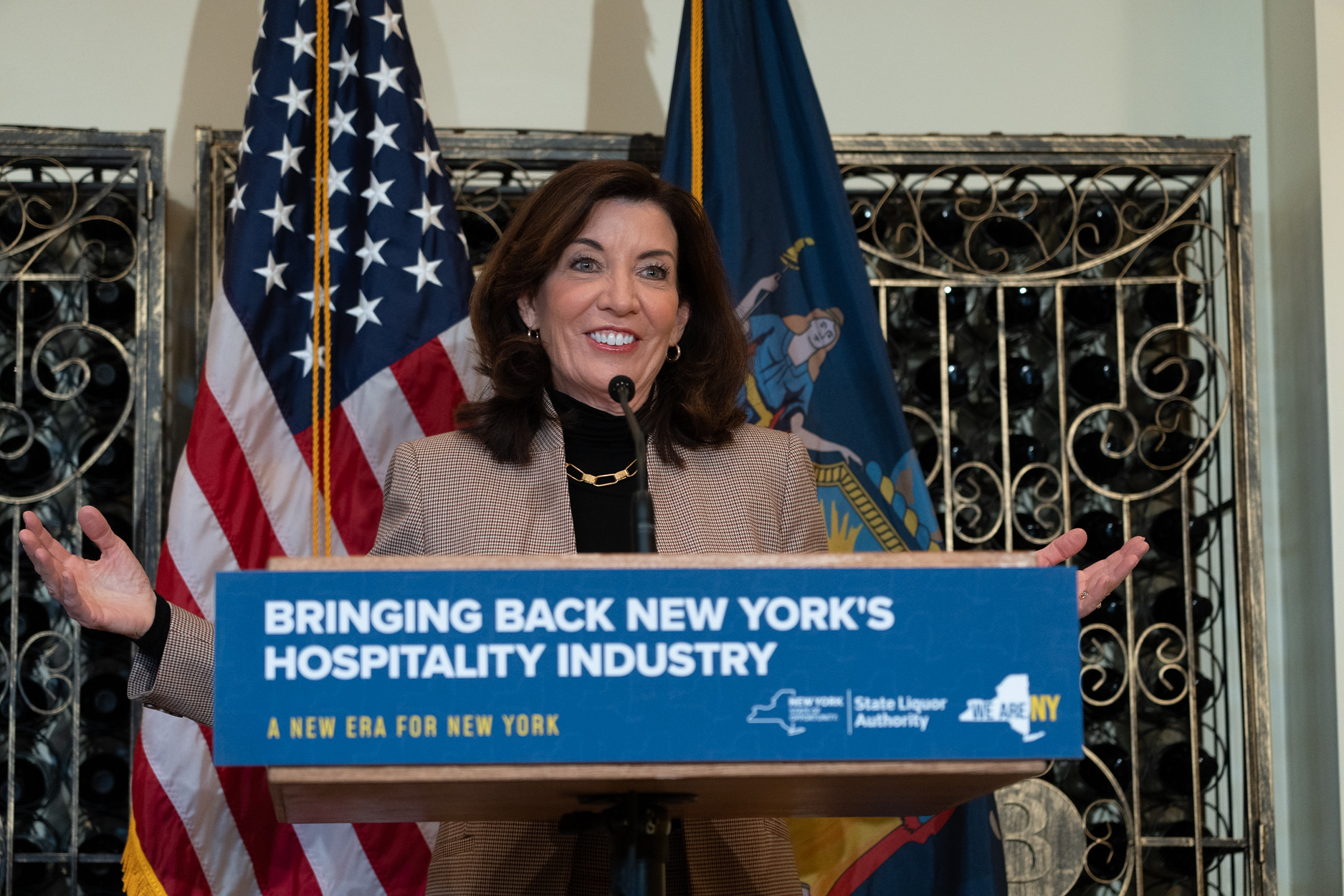 Friday was supposed to be the deadline for New York to pass its fiscal year budget, but as was the case last year – and in other years as well – the state will not start the new year immediately with a spending plan. That also means that questions about potential expanded gaming opportunities will remain unanswered until next week at the earliest.

New York Gov. Kathy Hochul speaks at a March 2 event promoting her plan to make changes to the state’s Liquor Authority. Hochul said late last week that she was still working with legislative leaders on finalizing a budget that may include expanded gaming in New York. (Image: Flickr.com/GovKathyHochul)

Such issues as downstate casino licenses and additional sports betting licenses aren’t likely holding up the New York budget. There’s likely a litany of issues that still need to be addressed, ranging from Gov. Kathy Hochul’s plans for bail reform to the state’s funding for the new Buffalo Bills stadium. The latter calls for using money from the Seneca Nation of Indians gaming compact settlement to pay for most of the state’s share.

In a statement late Thursday afternoon, Hochul pretty much made it clear that there was still work that needed to be done regarding the budget. She said she was “committed to ensuring” it was a reflection of the state’s priorities and addresses its primary concerns.

“New Yorkers should know that progress is being made and that we will put in the time it takes to reach an agreement that delivers for them and moves our state forward,” Hochul said.

The most likely gaming item to be included in the final budget is the three final casino licenses in the state. Those are slotted to go to downstate locations. For the uninitiated, that means New York City; its northern suburbs in Orange, Rockland, and Westchester counties; and Long Island.

Some groups are pushing for two established gaming racinos – Empire City Casino in Yonkers and Resorts World New York City at Aqueduct Racetrack in Queens – to get two of the full-fledged licenses. Empire City and Resorts World currently offer video lottery terminals, which operate differently from Las Vegas-style slot machines. They also only have electronic table games, as opposed to live-dealer table games currently available at the four upstate casinos.

In 2013, New York voters approved a constitutional amendment that legalized commercial casinos. The initiative, though, intended to give the four upstate casinos a seven-year head start before the downstate licenses were awarded. That initially made the three licenses available in 2023.

However, state Sen. Joseph Addabbo, D-Queens, and Assemblyman Gary Pretlow, D-Mount Vernon, called for the licenses to be expedited by a year. The lawmakers who chair their chambers’ legislative committees on gaming have pushed for that because of what COVID-19 has done to the downstate economy. The thought behind that is, one, the license fees can bring billions into the state coffers in the next year, and two, the casinos will help create thousands of jobs in two sectors particularly hurt by the pandemic: construction and hospitality.

In the past week, New York City Mayor Eric Adams has come out in support for the city to get two of the three licenses. In a series of tweets on Friday afternoon, he said that the downstate casinos could create a minimum of 16,000 jobs with most going to Big Apple residents.

The good jobs that come with a thriving tourism industry is a crucial component of bringing our city back,” the first-year mayor tweeted. “With our hotels down 50 percent due to the pandemic, accelerating and expanding downstate gaming options will help kickstart NYC’s comeback.”

The other expanded gaming measure that could end up making the budget is another Addabbo-Pretlow proposal to increase the number of mobile sports betting licenses.

The two gaming committee chairs have expressed an interest in allowing more operators to enter the state. The solicitation borne from last year’s budget led to nine operators being approved (eight of those have launched since the Jan. 8 go-live date).

Addabbo told Casino.org he and other lawmakers are waiting to see what the financial analysis is on sports betting before moving forward.

“By increasing the number of operators and even maybe tinkering with the tax rate, we should only consider doing that if it makes fiscal sense for the state and to improve the product for the consumer in New York,” the senator said. “If it does not, then we should not move forward with that.”