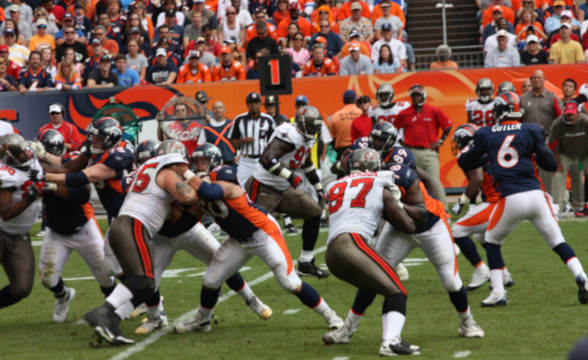 It wouldn’t be an overstatement to call the New York Jets the biggest overachievers in the NFL in the 2022-23 season. Ahead of week 7, they’re sitting in the #3 position in the AFC with a 4-2 record. Three of those wins happened in the previous three weeks, which makes the Jets one of the most in-form teams in the NFL. The big question is how long will their good run last – are the Denver Broncos (2-4) capable of putting an end to it?

The Broncos are the team that welcomes the Jets in Week 7. Sunday, October 23 is when they will host the game at Mile High, which is where they’re 2-1 this season, with their only home loss happening in overtime.

Judging by the odds, anything can happen in this game – bookies are giving -110 on each team. We too think this is going to be a super-close contest, and if you want to see who will think will triumph in the end, just keep on reading!

When Will the Jets’ Superb Run End?

The New York Jets won their fourth game of the season last Sunday when they beat the Green Bay Packers. It’s needless to say that it was a surprising win, considering that the Packers were playing at home. Nevertheless, the New Yorkers beat them 27-10.

They’re now 4-2, which is their best record since 2021, which is the last season when we saw them make the playoffs. Considering that they’re playing in a very tough division (AFC East), their odds of qualifying for the playoffs aren’t that great. Still, they can improve their odds if they continue playing great.

The Jets are 3-0 since the return of QB Zach Wilson and are hopeful of getting another one. They’re brilliant in the offense with 143 points in six games. Their defense hasn’t been that brilliant, but that shouldn’t worry them much as, in Week 7, they’re locking horns with a team that’s disastrously bad in the offense in 2022.

The 2022 season was supposed to be the one when the Broncos take their game to the next level. In the previous season, their defense looked good, while their offensive team was showing a lot of promise. It seemed as if they only need a quality quarterback to turn themselves into a Super Bowl challenger.

That’s why they signed Russell Wilson, splashing huge amounts of money to get him to move to Colorado. Unfortunately, he’s been horrible in the 2022 season. To make things even worse, Wilson picked up a hamstring injury, which means that the Broncos will probably have to put backup Brett Rypien in the role of the signal-caller in Week 7.

The Broncos are playing bad football in 2022 and the Jets need to take advantage of that. With or without Wilson on the field, the Broncos aren’t going to do much against the Jets.

This means that the key to winning this game for the visitors from New York is to do well offensively. With Zach Wilson in top form, we think they’re not going to fail.

Picks: New York Jets to win; under to hit