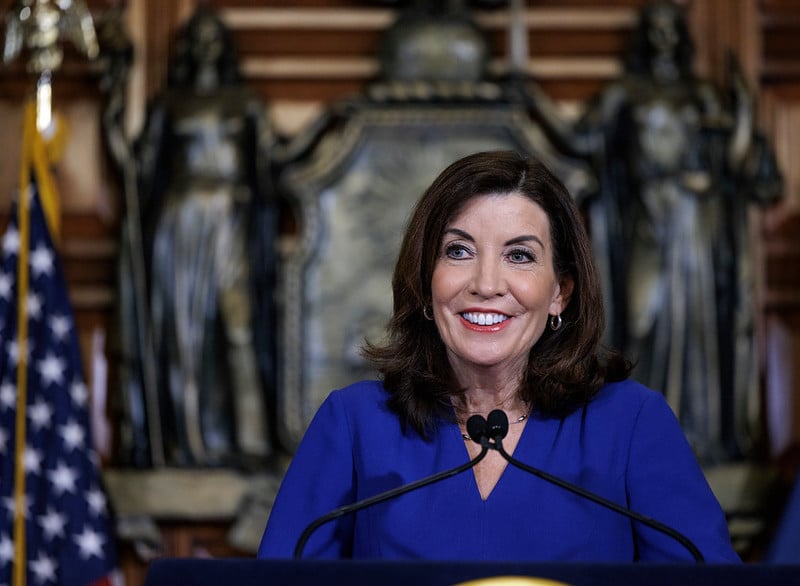 It took into the early hours of Saturday morning, more than a week past its due date. But the New York state legislature officially approved a $220 billion state budget that includes three casino licenses for the downstate region.

Besides the downstate casinos, the budget also includes language to cover the state’s portion of a new $1.4 billion stadium for the Buffalo Bills. Hochul has said New York would use proceeds from the settlement with the Seneca Nation of Indians over its compact dispute to cover most of the state’s share of $600 million in the project.

However, the spending plan did not include additional mobile sports betting licenses, meaning New York will continue offering just nine apps for the time being.

As expected, lawmakers gave New York the go-ahead to begin the licensure process for the final three commercial casinos the state can license. Those will go to projects in New York City or its surrounding suburbs, either just north of the Big Apple or on Long Island.

According to the approved budget, the licensing fee for each of the casinos will be at least $500 million. The initial licenses will be good for at least 10 years, but no more than 30 years.

State Sen. Joseph Addabbo, D-Queens, said in a statement Saturday that the local communities that get casinos will end up winners out of the budget. He said that the licensing fees and tax revenue generated will provide vital funds for education and gambling addiction programs.

“By allowing three casinos in the downstate region to operate with full licenses, it will create thousands of jobs when considering construction and credible post-construction union jobs,” said Addabbo, who chairs the Senate Racing, Gaming, and Wagering Committee.

There will be a push to give two of the licenses to existing video lottery terminal venues in the New York City area. Resorts World New York City is based at Aqueduct Racetrack in Queens, and MGM Resorts International operates Empire City Casino in Yonkers.

Bob DeSalvio, president of Resorts World owner Genting Americas East, said in a statement Friday the company stands ready to take advantage of the opportunity. He noted that more than $1 billion has been invested in the venue over the past decade.

We are ready, willing, and able to immediately double our workforce by adding more than 1,000 new union jobs and help the true potential of resort-style gaming, entertainment and hospitality be realized right here in the heart of Queens,” DeSalvio said.

Getting the licenses in the budget is just the first step of the process. Addabbo said that lawmakers’ work is far from over. In municipalities or boroughs where casinos will be proposed, lawmakers will help appoint members to a community advisory committee that will review applications.

Lawmakers “must monitor the timely, fair, and transparent bidding process for the licenses, and ensure that the siting process is being credibly implemented,” Addabbo said.

The Buffalo Bills stadium issue was one of the more divisive items for lawmakers in the budget process. During floor speeches Friday night and early Saturday, several lawmakers raised concerns about the state covering any portion of the stadium that will serve as the home for an NFL team owned by a billionaire.

“I was not elected just to give the wealthy $600 million for a stadium while home care workers are only given a $3 increase to do back-breaking work that saves lives,” Assemblymember Jessica Gonzalez-Rojas said early Saturday on the floor.

Hochul has defended the state’s portion of the stadium funding. She noted that most of it would come from the $564 million New York received from settling with the Seneca Nation. That money came from the gaming compact payments lawsuit that dragged on for years.

Though tribal leaders paid the funds, they have not held back their vitriol over how they said the state forced their hand. Tribal President Matthew Pagels decried New York’s actions as “bully tactics,” which included freezing the tribe’s financial accounts.

In response, the tribe has started running commercials criticizing the state for the move. In a video statement to tribal members Friday, Pagels said the ad campaign is just part of how the Senecas plan to respond to the Hochul administration’s actions.

“Our point is clear: we will not tolerate the bully tactics and political attacks from Albany’s rulers,” he said. “At the same time, we are actively and aggressively preparing for the gaming compact negotiations.”