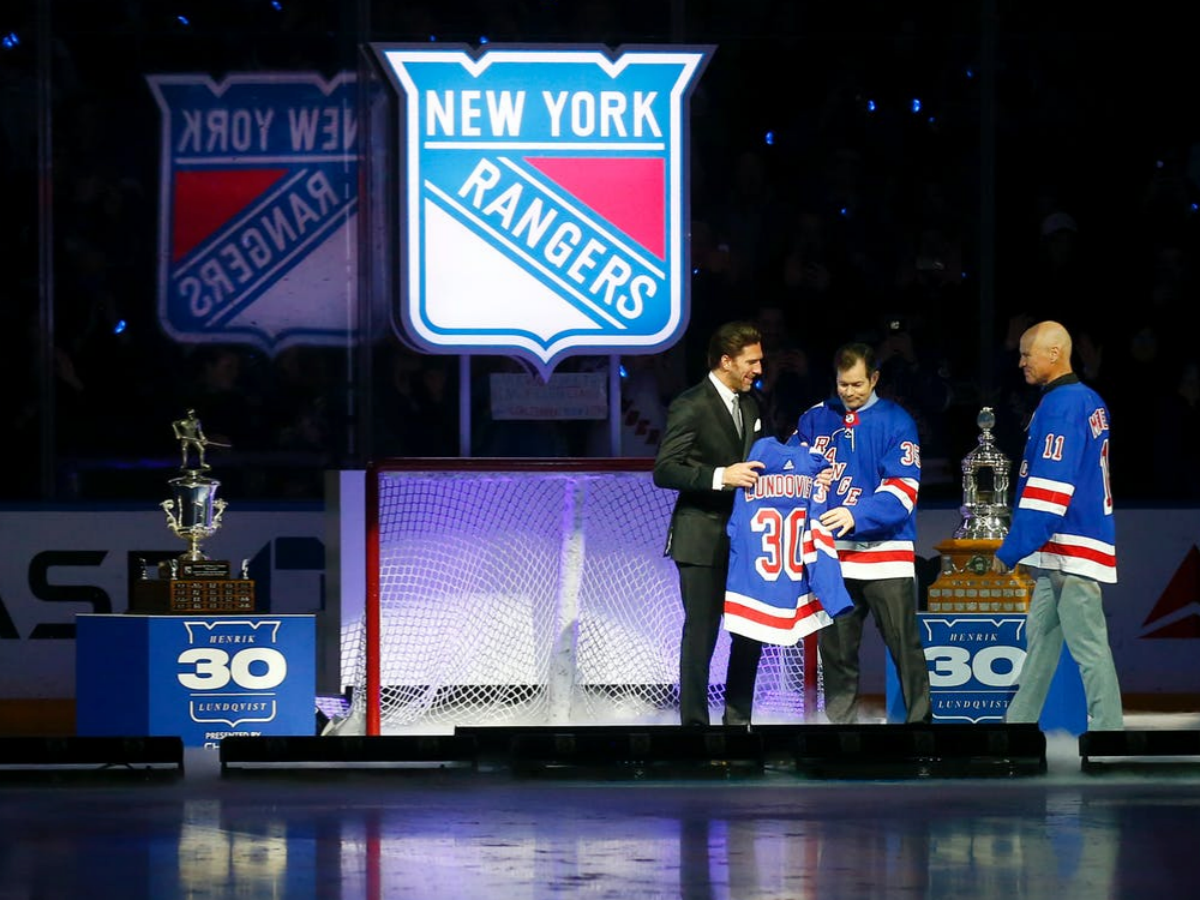 The New York Rangers retired the jersey of former star goaltender Henrik Lundqvist in a game against the Minnesota Wild last month. New York sports bettors wagered more than $1.6 billion on games in January, a record amount for any state in a month. (Image: Associated Press)

New Jersey’s total includes its retail sportsbook. When you factor in the $21 million in bets New York’s four upstate brick-and-mortar books accepted for the month, the state’s handle approaches $1.65 billion.

The mobile apps in the state were not permitted to launch until Jan. 8, meaning the state needed just a little more than three weeks to set the new high-water mark.

State Sen. Joseph Addabbo, D-Queens, said in a statement Friday that he and other leaders were confident mobile sports betting would succeed in one of the country’s top sports markets.

“But to be able to break the national record of total handle for sports betting in a single month in our very first month, with primarily only six sportsbooks, is both rewarding and exciting,” said Addabbo, who chairs the Senate Racing, Gaming, and Wagering Committee. “Breaking this record proves that New York was ready for mobile sports betting, and we are providing our state with a new revenue, educational and addiction funding source. It also can give us an indication of where we go from here, especially with the Super Bowl within our sights.”

The state’s licensed mobile operators reported revenues through Jan. 30 of $113 million. New York will collect 51 percent of that in taxes, or $57.6 million. Sports betting revenues at upstate casinos are taxed at 10 percent.

Like the handle, New York’s tax revenue also set a new monthly record for a US state.

That means in just one month of operation, the New York state government will have exceeded its forecast for revenues from sports betting. State leaders expected sports betting to bring in $249 million for the 2022 fiscal year, ending in March. That forecast included the $200 million the state received in licensing fees for mobile wagering.

The licenses will remain valid for 10 years.

Despite the strong start, it does not appear that state officials are ready to change any future projections just yet. The Hochul Administration’s budget plan includes getting $357 million in sports betting tax revenues in fiscal year 2023. It projects $465 million in 2024, $493 million in 2025, and $509 million in 2026.

We look forward to a robust landscape of mobile sports wagering for years to come, one that helps to fund education in New York State as well as provide annual awards to sports programs for underserved youth and problem gambling education and treatment,” Hochul spokesperson Jason Gough told Casino.org.

All but 2% of the tax revenue the state gets from mobile sports betting will fund New York’s education programs. Sports programs for underserved youth and problem gambling education and treatment programs will split the remaining funds.

For the week ending last Sunday (Jan. 30), New York’s mobile sports betting apps reported a handle of $449.3 million. That was down more than $123 million from the previous week’s total.

The likely reasons for that drop include fewer playoff football games for the week. It also may be because the Kansas City Chiefs eliminating the Buffalo Bills the weekend before.

Caesars Sportsbook took the brunt of the drop, reporting a weekly handle of $128.1 million. That was down more than $100 million from the prior week. While the Bills demise may have contributed to Caesars fall, the drop may also be tied to Caesars ending its promo of matching initial deposits of up to $3,000.

Despite the big drop in handle, revenues only fell by less than $5 million, as Caesars reported winnings of $14.1 million for the week.

FanDuel reported a larger handle than Caesars, though its $141.8 million was still down by about $18 million. However, the Flutter Entertainment product went from revenues of $10 million for the week ending Jan. 23 to a loss of nearly $565,000 for last week.

DraftKings reported a weekly handle of $102.2 million for the final week of January, down almost $30 million from the prior week. Revenues dropped by just about half to $5.3 million.

BetMGM saw a slight decline off its debut week, as it posted a $37.5 million handle in its second week. That was roughly a $3 million decline in action. Revenues went from $2.5 million to just more than $710,000.

PointsBet posted a handle of $29.5 million in its debut week. The sports betting operator also reported initial revenues of $2.3 million.

BetRivers saw the smallest decline of any operator. Its $10.2 million handle was only about $1.4 million lower than the previous week. However, the Rush Street Interactive app went from reporting revenues of nearly $785,000 two weeks ago to reporting a loss of almost $395,000 last week.

Wynn Kicks Off in New York

Friday also marked the launch of New York’s seventh mobile app, as WynnBET made a formal announcement. The Empire State became the eighth US market for the Las Vegas-based sports betting operator.

Wynn Interactive President Ian Williams said in a statement that going live serves as a “monumental step” for the high-end gaming brand.

“New York represents a significant population of our Wynn Rewards membership, and we are confident in our ability to compete in this market by providing the first-class service and gaming experiences synonymous with the Wynn Resorts brand,” he said.

To celebrate the launch, Wynn is offering $200 in free bets for new players who make at least a $10 deposit and bet at least $10 for their first wager, either on a straight bet or a parlay.