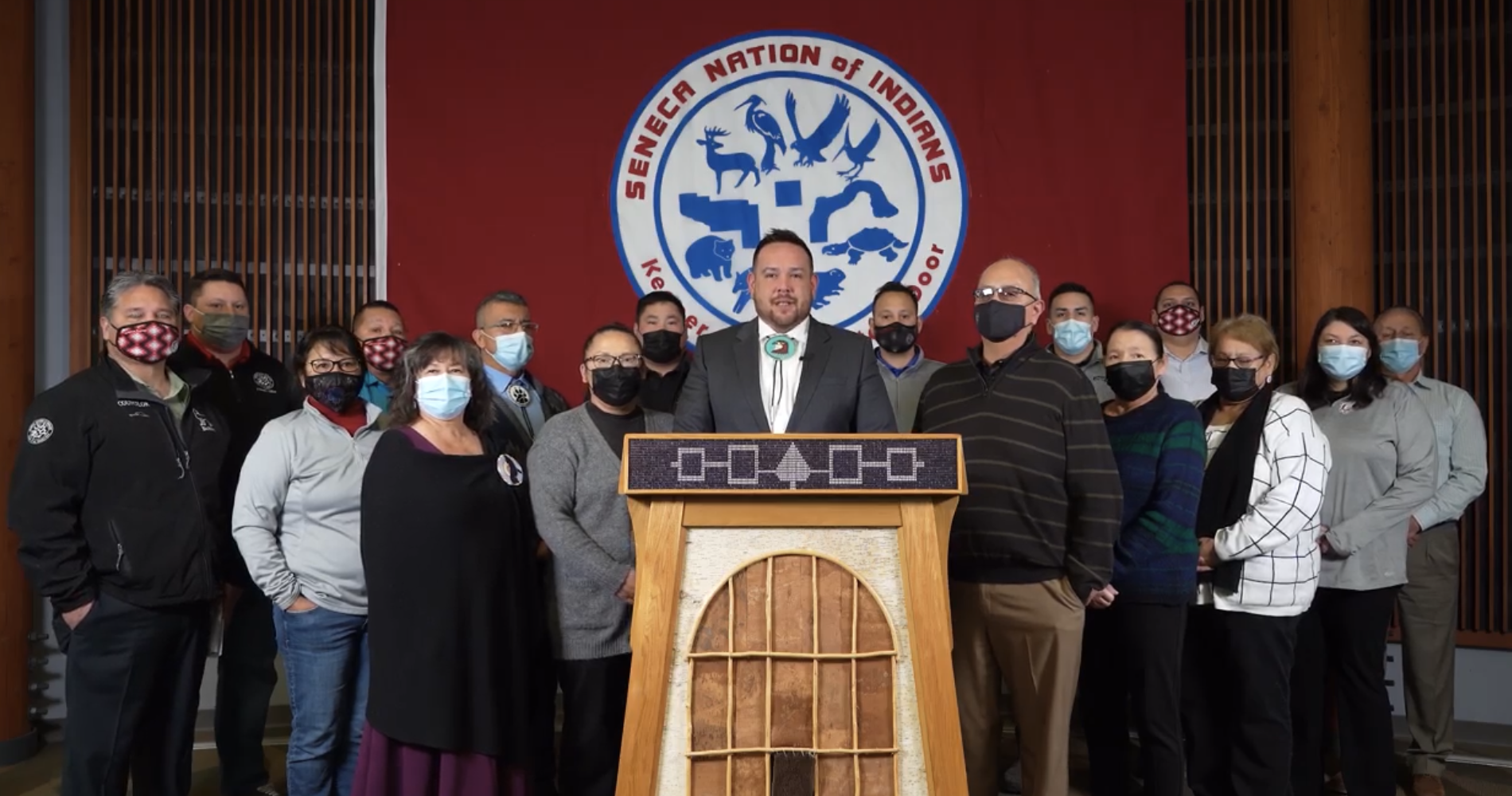 New York and the Seneca Nation of Indians have resolved their longstanding legal battle over their gaming compact and agreed to begin negotiations on a new accord.

Seneca Nation President Matthew Pagels, with other tribal leaders behind him, announces Wednesday night that the tribe has reached an agreement with New York to end its four-year legal battle over payments the state said it deserved as part of the gaming compact between the entities. The agreement also stipulates that both sides will begin talks on a new compact to replace the one that’s set to expire in December 2023. (Image: Seneca Media & Communications Center)

Seneca Nation President Matthew Pagels announced the settlement in a message Wednesday night to tribal members on Facebook and Twitter. He said that the deal calls for the tribal nation, which operates three Class III tribal casinos in western New York, to give the state the back payments it was initially awarded through arbitration.

According to the Buffalo News, the tribe has held about $450 million in an escrow account to cover the payments while the dispute worked its way through the federal courts.

The good faith negotiations for a new compact are to start within 60 days, Pagels said in a five-minute address with other Seneca Nation leaders standing behind him.

For four years, we vigorously raised many compact concerns in multiple legal challenges,” he said. “Rather than pursue continued legal action, we believe it’s in the best interest of the Seneca Nation to address those important concerns through a negotiation of a compact that will provide clarity on our obligations, and equally as important, the obligations New York State has to the Seneca Nation in return.”

A message to Hochul’s office late Wednesday was not immediately returned.

History of the Seneca Lawsuit

The two sides agreed to a 21-year gaming compact in 2002. The deal included a 14-year base agreement and a seven-year option that would be automatically enacted if neither party objected. The initial deal included language calling for the tribe to make payments to the state, with those payments gradually increasing to a 25 percent revenue share by year 14. However, the option did not include that language.

After a split decision went the state’s way, the Seneca Nation filed a federal lawsuit in June 2019 and claimed the arbitrators failed to follow the Indian Gaming Regulatory Act (IGRA) in making its ruling. In November of that year, a judge ruled against the tribe.

The Senecas appealed that decision. However, the Second Circuit Court of Appeals also ruled on the state’s behalf last February.

After choosing not to continue the appeal, the tribe went back to the federal district court and tried to get the ruling vacated after the US Department of the Interior told Seneca leaders that it did not perform an economic assessment on the seven-year option. That is required under IGRA.

Tribal leaders then asked US District Judge William Skretny in September to delay ordering the payment while the National Indian Gaming Commission determined, at the federal government’s request, if the back payment would violate IGRA. The federal tribal gaming law requires the nation to be the “sole proprietary interest” for its casino operations, and it also stipulates that any revenue-sharing agreements with state governments must give tribal nations something of value in return.

Pagels: Time for a “New Chapter”

Last month, Skretny denied the Seneca Nation’s motion to stay the order. In his 22-page order, the judge said that the tribe did not prove it would face an “undue hardship” from federal authorities if it made the payment.

Rather than continue with another appeal, Pagels said it was time to move forward.

The Seneca Nation will find itself negotiating with a new leader as Gov. Kathy Hochul replaced former Gov. Andrew Cuomo, who resigned in August. That’s important for a couple of reasons.

First, Hochul is a Buffalo native and before she became lieutenant governor and now governor, she represented the city, which has one of the three Seneca casinos, as its representative in Congress. Second, Hochul has promised to run New York’s government differently than her predecessor, who was known for his brash and heavy-handed bargaining tactics.

“We’re confident she and her administration will work in good faith with the Seneca Nation on a compact that is fair and equitable,” Pagels said.

Besides an agreement to start talks on a new compact, the nation also will receive more than $40 million in disputed fees and cost savings over the remaining two years of the compact, Pagels said. Those funds will be handy as Seneca members continue to deal with the COVID-19 pandemic and the impact it’s had on the nation’s health and economy.

He also said other tribal entities will benefit from what the Senecas went through over the last four years.

“Through our efforts, the Seneca Nation has reset the bar for how a compact will be viewed and reviewed at the federal level to ensure that we’re being treated fairly and not encumbered by unjust obligations,” the Seneca Nation’s president said. “We strongly believe that our leadership on this issue will ultimately benefit all native nations in the respective compact negotiations going forward.”