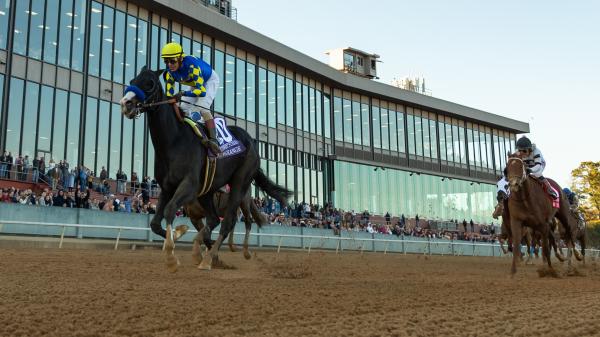 Under a suspension issued by Churchill Downs Inc. from its tracks, trainer Bob Baffert is currently prohibited from participating this year and next in the Grade 1 Kentucky Derby Presented by Woodford Reserve. But that isn’t stopping the Hall of Famer from winning races on the Derby trail, just as he long has.

Jan. 29 at Oaklawn Park, the Arkansas oval that is a familiar target for Baffert’s California trainees, the Hall of Fame conditioner won the Grade 3 Southwest Stakes with Newgrange. The victory improved the Violence colt to 3-for-3 and marked his second graded stakes victory on the Derby Trail this year following the Jan. 1 Grade 3 Sham Stakes at Santa Anita Park.

Saturday’s win was the fifth in the Southwest for Baffert, whose first four wins came from 2010-13.

As in the Sham, Newgrange didn’t earn any qualifying points Saturday on Churchill Downs’ Road to the Kentucky Derby series, but he earned something else: $450,000 in first-place prize money. The $750,000 Southwest was the richest race in North America for 2019-foaled horses since the Breeders’ Cup Nov. 5 at Del Mar.

Though the result was the same as the Sham and an earlier maiden victory, Saturday’s win for Newgrange came in a different fashion. Unlike in those starts, he did not lead until late.

Outsprinted early as the field of 12 scrambled for early positioning, Hall of Fame jockey John Velazquez chose to ride the 3-2 favorite patiently, content to let him find his rhythm. The colt settled in third, about two lengths off the pace, as Kavod set splits of :23.08, :47.32, and 1:12.42 in the 1 1/16-mile contest.

Coming under a ride on the second of two turns from Velazquez, Newgrange was slow to pick up the leaders, fourth with a furlong to go, before asserting his superiority late and pulling clear a length and a half over wide-rallying runner-up Barber Road. The winner paid $5.

Ricardo Santana Jr., who rode Barber Road, said his mount ran a good race but “the winner was much the best.”

Velazquez said he felt Newgrange was not handling the Oaklawn racetrack early. He finally began responding when the jockey asked the colt to pick up the leaders with a half-mile remaining.

“Once he got close to the horses, he got serious,” Velazquez said in a post-race television interview. “And when I got after them at the quarter-pole, he responded, but it took a little bit for him to get going and get his feet under him.”

The winner was clocked in 1:45.83 over a track that produced slow times—about two-fifths faster than Secret Oath’s time in a comfortable score in the Martha Washington Stakes for 3-year-old fillies in 1:46.21 a couple of hours earlier on Saturday.

“We saw he had a different dimension today, the way the race set up,” Baffert told Oaklawn publicity in a telephone interview. “Pretty proud of the way he ran.”

Baffert’s assistant, Jimmy Barnes, saddled the colt at Oaklawn before an announced crowd of 27,000.

Ben Diesel, who stalked the pace before threatening along the inside in midstretch, flattened out to be third, 2 3/4 lengths in front of a weakening Kavod in fourth.

Smarty Jones winner Dash Attack, the second favorite in the race at 3-1, was an even-paced fifth after making a backstretch bid into contention.

Consulting with bloodstock agent Donato Lanni and other advisors, SF/Starlight/Madaket purchased Newgrange from the Brookdale Stakes consignment at the 2020 September Yearling Sale at Keeneland, part of a successful group of acquisitions that year for his owners. Their modus operandi is to buy well-bred, attractive colts and with good fortune on the racetrack, sell them as stallions.

Bred in Kentucky by Jack Mandato and Black Rock Thoroughbreds, Newgrange is the first stakes winner of the unraced Empire Maker mare Bella Chianti. His dam has produced five winners from as many starters and has an unnamed full brother to Newgrange. The winner’s second dam, Bella Chiarra (Phone Trick), was a grade 2 winner who placed in a grade 1.

2022-01-30
Previous Post: From Stacks to Stories: The Thread Between Poker and Comics
Next Post: A 9/1 Sunday boost featuring Derby