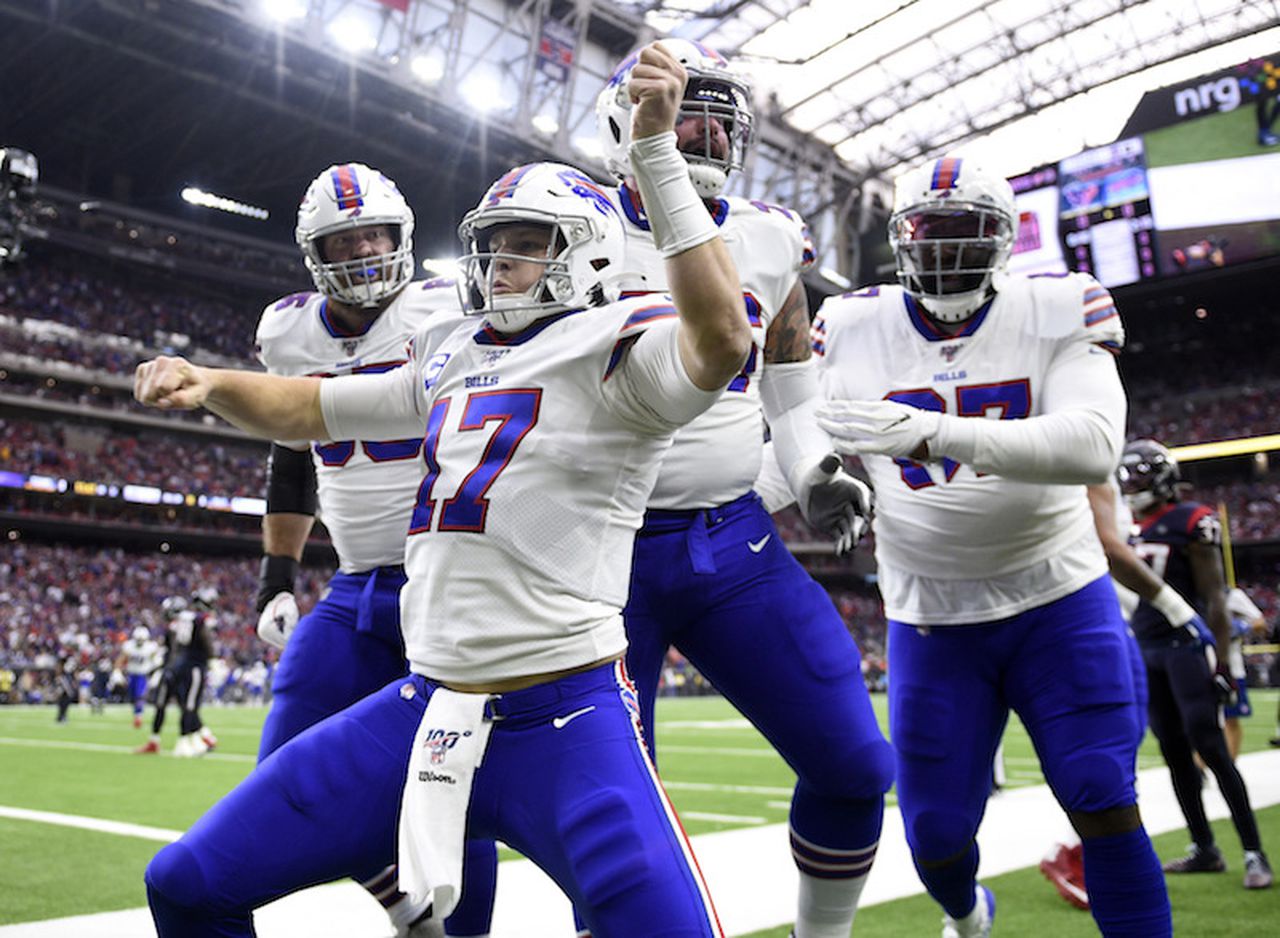 The NFL regular season does not start for another four months, and most players won’t report for training camp until late July. However, the league still found a way to capture the attention of sports fans on Thursday with the release of the 2022 schedule.

Buffalo Bills quarterback Josh Allen celebrates catching a pass against the Houston Texans in a 2020 playoff game. Bettors think the star signal caller and his teammates will be the ones celebrating at the end of this season, as oddsmakers have made the team the favorite to win next February’s Super Bowl. (Image: AP/Eric Christian Smith)

The first game of the season may be a preview of the final game of the season. The Buffalo Bills travel to Los Angeles to play the Rams, the defending Super Bowl champions, on Thursday, Sept. 8, in a primetime affair. The Bills are the consensus favorite to win the Super Bowl this season, with the Rams odds to repeat not that far behind.

FanDuel Publicity Director Kevin Hennessy said in a statement that the Bills have received the most bets and the most money on its futures board. The Bills have +650 odds to win the Lombardi Trophy next February, according to odds  at the Flutter Entertainment-owned sportsbook.

Fans have known since the end of last season just who their favorite teams would be playing, but they just didn’t know when. Nor did they know until Thursday how many primetime slots, like Monday or Sunday night games, their teams would have.

The NFL’s announcement also opened the door for betting on week one games, and some did take advantage of the opportunity – although that’s a risky proposition right now, because expectations can change because of trades, signings, injuries, and suspensions.

But that hasn’t stopped some sportsbooks from offering lines and a few bettors from making a wager or two.

So, with so much uncertainty at this point, how do oddsmakers set lines for these games? Caesars Assistant Director of Trading Adam Pullen said it’s “a collaborative effort” among its traders.

We all come with our numbers and try to find middle ground,” Pullen said. “That’s how we set the lines. We are really all in the dark. We are using what happened last year and forecasting the upcoming season. It is a guessing game. It is always interesting to see how people bet the lines right off the bat.”

Shortly after Caesars posted its lines, Caesars Sportsbook took a $5,000 bet from a New Jersey bettor on the Dallas Cowboys getting three points against Tom Brady and the Tampa Bay Buccaneers in the first Sunday night game of the season.

Other NFL Week 1 Games of Interest

Besides the Bills-Rams and Bucs-Cowboys, there are a couple of other opening week NFL games that may draw some big betting interest.

In Arizona, the Cardinals host the Kansas City Chiefs in what many expect to be a high-powered shootout. For now, It has the highest total points line at Caesars, DraftKings, and FanDuel. The Chiefs, who were upset at home by the Cincinnati Bengals in last year’s AFC Championship Game, are still among the top picks to win it all this season. However, the Chiefs may have to tweak their potent offense after trading Tyreek Hill to Miami in the off-season.

The Monday Night Football game features the Denver Broncos and their new quarterback, Russell Wilson, playing on the road against Wilson’s old team, the Seattle Seahawks. When the Broncos traded for Wilson earlier this year, they saw their Super Bowl odds shorten significantly.