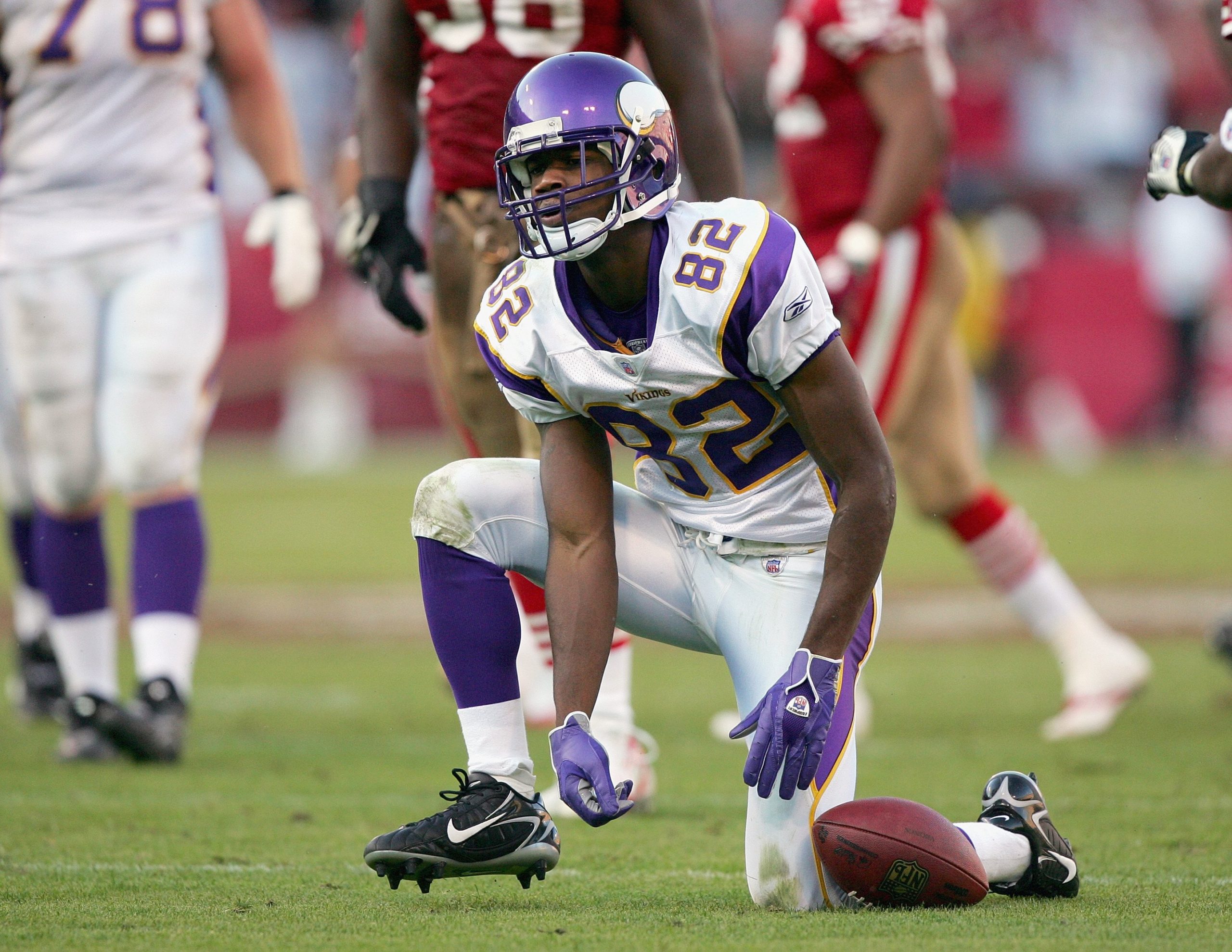 SAN FRANCISCO – NOVEMBER 5: Troy Williamson #82 of the Minnesota Vikings drops the ball during the NFL game against the San Francisco 49ers at Monster Park on November 5, 2006 in San Francisco, California. (Photo by Jed Jacobsohn/Getty Images)

The annual NFL combine is underway this week in Indianapolis. Coaches, players, and fans are often indifferent about whether the combine really matters. The answer, of course, is that the NFL continues to hold the event which has now broadcast on the NFL Network. But, does it really matter how fast, strong, or explosive a player is in 40-yard dash, a bench press, or a vertical jump?

Yes. And no. For these several players, the combine helped to elevate their draft status. Soon afterward, front offices, coaching staffs, and fans learned that a good combine performance doesn’t always translate into good football players. Here are eight players that went from combine hero to pro zero.

Hill had a great size-speed ratio that NFL scouts loved. He was 6-4 and 215 pounds and when he ran at the NFL combine, eyes opened. Hill ran a 4.36 40-yard dash, but remember he played in Paul Johnson’s triple option offense. He really didn’t catch that many passes as a college receiver. The Jets rolled the dice and picked Hill in the second round of the 2012 draft. He lasted two seasons with the Jets and after two lackluster years with Carolina, Hill was out of the NFL.

He was a little under 6-2 and weighed 255 pounds. Curry was big and he ran 4.56 at the 2009 NFL combine. He recorded a 37-inch vertical jump and pumped out 25 reps on the bench press. He was considered an elite prospect before the combine and his performances there cemented it. Seattle picked him No. 4 overall. Curry played in 30 games but lost his starting job by 2011 and was traded for a seventh-round draft pick.

Heyward Bey was a combine hero. He was an NFL zero.

Heyward-Bey had been a high school track star. He played his college football at Maryland where he never really had an outstanding season. What he did have though was speed. At 6-1⅝ and 210 pounds at the 2009 NFL combine, Heyward-Bey ran a 4.30 40-yard dash. His vertical jump was 38.5 inches and teams like the Raiders fell in love. They drafted him No. 7 overall ahead of other more accomplished receivers like Michael Crabtree. Heyward-Bey played nine seasons in the NFL and scored 16 touchdowns.

Coming out of Ohio State, Gholston was everything an NFL team wanted in a defensive end. He was 6-3, 266 pounds and he ran a 4.58 at the 2008 NFL combine. He also recorded a 42-inch vertical jump and 37 reps on the bench press. The Jets took him at No. 6 overall. Gholston responded by starting just five NFL games and he never recorded a sack.

Henry was built like a truck and ran like one too. At a shade over 5-11, Henry weight 234 at the 2007 NFL combine. He ran the 40 in 4.41 and Tennessee drafted him in the second round (from University of Arizona). He was suspended for his first four NFL games after violating the league’s substance abuse policy. He had 119 yards rushing his rookie year. The following season he ran once for three yards. After two stints on various practice squads, Henry’s NFL career was over.

Jones was a quarterback at Arkansas, but he was also a tremendous athlete with incredible physical gifts. Jones was 6-6¼ and weighed 242 pounds. At the 2005 NFL combine, Jones ran a 4.37 in the 40, had a vertical jump of 39.5 inches, and a broad jump of 10-feet-9-inches. That earned him the 21st pick in the 2005 draft. Jones lasted four seasons with Jacksonville and caught 65 passes in his final season. Substance abuse issues drove him out of the game. See career NFL stats

In high school in South Carolina, Williamson was a state champ in the 100 meters (10.35) and 200 meters (20.79). He played his college football at South Carolina. Williamson attended the 2005 NFL combine where he ran a 4.32 in the 40. He was 6-1¼ and weighed 203 pounds. Minnesota needed help at receiver after the exit of Randy Moss. Williamson was the seventh pick in that year’s draft. Four years later, he was done with a total of four career NFL touchdowns.

The father of the modern combine hero, pro zero. Mamula was one of the first players to train specifically for the NFL combine. He had great size at 6-4½ and 248 pounds. He displayed great speed with a 4.58 40-yard dash, which is very fast for a linebacker. He bench pressed 225 pounds 26 times which happened to be more than future Hall of Fame OT Tony Boselli and his 38.5-inch vertical jump was higher than CB Jimmy Hitchcock. The Eagles took Mamula with the No. 7 overall pick in ’95. His pro career didn’t line up with his draft expectations and in 2000 Mamula’s NFL career ended. See career stats