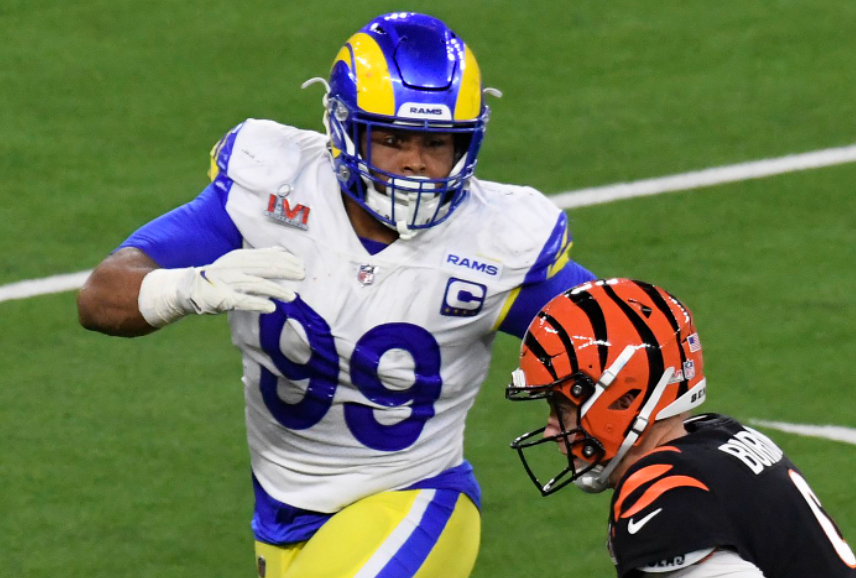 Aaron Donald is the best player in the NFL who is not quarterbacking. He’s now about to be paid as such. The All-Pro and three-time Defensive Player of the Year is getting a reworked contract from the Los Angeles Rams that will pay him a record contract for a non-quarterback.

Essentially, it’s a $40 million raise in salary, including some $65 million in guarantees. He also has a guaranteed $30 million in 2024, if he decides he wants to play that season. The choice, and the check, is his.

After the signing, Donald said, in a video released by the team, “I’m locked back in to go get us another ring. At SoFi Stadium, getting chills thinking about it. Let’s go to work.”

Donald had flirted with the possibility of retirement, and said money was never factoring, only a chance to return to the Super Bowl. He now has lots of money and a chance to win another ring.

Aaron Donald is currently priced at +700 to win 2022 Defensive Player of the Year.

With their best defensive player signed, sealed and redelivered, Los Angeles is hoping one of its key offensive players from a year ago is ready to rejoin the team.

Odell Beckham Jr. remains a free agent, rehabbing a torn ACL which ended his 2021 season a few quarters too soon. He’s not a free agent staying away from his previous team. This weekend, he showed up unexpectedly at the wedding of coach Sean McVay.

“I love Odell. Only in Odell’s fashion could he be the wedding crasher at our wedding. He showed up and crashed the wedding. I said, ‘You crashed my wedding, you re-sign with the Rams then, man.’ That’s a given right there.”

It’s good pitch from McVay, and clearly OBJ isn’t a tough sell, someone who hasn’t separated himself from the Rams. The issues at play, however, remain somewhat complicated. There’s the rehabbing injury, meaning OBJ is likely to miss the beginning of the season. There is also the presence of new Ram Allen Robinson, clearly second wide receiver behind Cooper Kupp.

Wagering on the Rams to repeat is paying +1100, tying them (with the Green Bay Packers) for the fourth shortest odds, according to Super Bowl odds. The Buffalo Bills are first at +650, the Tampa Bay Buccaneers are second at +750, and the Kansas City Chiefs are third at +900.

Broncos Sale Is All But Done

In the NFL, its own version of the Billionaires’ Club that is about to get the richest owner of them all, Rob Walton. The Walmart heir, worth a reported $59.6 billion, supposedly had the winning bid to buy the Denver Broncos at $4.5 billion. It hasn’t been finalized yet, but the announcement of the bid and change of ownership is expected to be before the end of the month.

Walton won’t just be the richest owner in the NFL. especially since his net worth is more than the top six current team owners in the league. That’s combined.

With the $4.5 billion price tag for the Broncos, assuming that is where the final price will land, it then easily beat the previous highest price for an American sports franchise. Back In 2019, the Brooklyn Nets of the NBA sold for $2.35 billion. In the NFL, in 2018, the Carolina Panthers were bought by David Tepper for $2.275 billion.

Pat Bowlen bought the Broncos back in 1984 for $78 million. The Pat Bowlen trust, which now owns the team, is going to get 57 times that rate of return in the sale to Walton.

Peyton Manning isn’t a part of the Walton ownership team, and wasn’t involved in any of the four groups that made bids on the Broncos. However, it’s been reported the Walton group has reached out to Manning about a role with the team once it’s theirs.

The Broncos are paying +250 to win the AFC West, according to NFL odds.