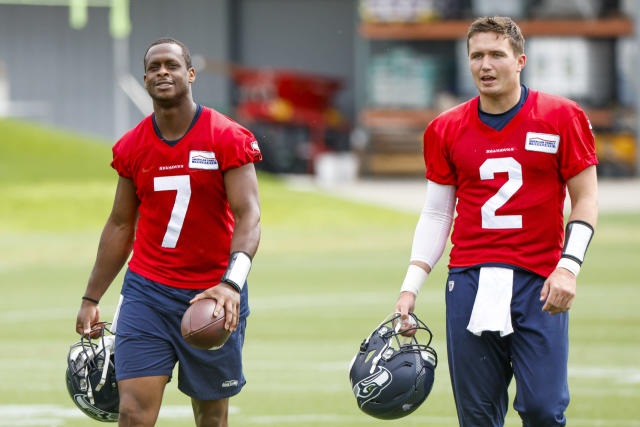 As the NFL transitioned from training camp to the preseason, top position battles and rookies to watch were at the forefront. Practice is all well and good, but the game performance tells the final story.

Geno Smith is the Seattle Seahawks’ incumbent starting quarterback by virtue of being on the team last season. He was the starter Week 1 against the Pittsburgh Steelers. Drew Lock, meanwhile, once was the Denver Broncos’ quarterback of the future. He still might be able to play his way to the position in Seattle.

Lock wasn’t bad in his time in the second half, until fumbling the ball with the game on the line.

It’s not an indictment on his overall effort, however, He’s behind Smith on the depth chart, and he needs to be special at home Thursday night against the Chicago Bears to compensate for that faux pas.

The Seahawks are five-point favorites over Chicago, according to NFL preseason odds.

The Pittsburgh Steelers’ line all during camp is that they want to bring rookie quarterback Kenny Pickett along slowly, letting Mitchell Trubisky begin the season as the starter. The problem is Pickett isn’t obliging. He’s been coming along quite quickly, and the fans are in love with him.

He did lead the team on a game-winning, fourth quarter drive (32-25 over the Seattle Seahawks). capping a 95-yard and two-touchdown effort during chants of “Kenny! Kenny!”

Sentiment isn’/t going to make coach Mike Tomlin choose a quarterback. It will make it harder for him to go with Trubisky when the regular season starts, if Pickett’s still thrilling the locals.

“Our rookie is better and faster than we thought he would be” is an excellent problem now, but it’s only one game, so let’s see what happens in the next few weeks. The Steelers get Jacksonville Saturday night, and if Pickett plays another poised and confident game, it will make for a wild third preseason game.

Trubisky’s odds remain strong (-1000) to be the Pittsburgh starting quarterback in Week 1 of the regular season. Pickett is currently priced at +550, but stay tuned.

Rookie of the Year Dark Horses

There were a lot of good edge rushers selected at the top of this past draft, and those are the position groups leading the way in Rookie of the Year odds.

As of now, favorites for Defensive Rookie of the Year are all pass rushers, as in the Detroit Lions’ Aidan Hutchinson (+450), the New York Giants’ Kayvon Thibodeaux (+550) and Travon Walker of the Jacksonville Jaguars (+500). That’s according to NFL odds.

Hutchinson only played 11 snaps in his first preseason game, but had a tackle for loss and displayed a couple of great moves on the pass rush. Thibodeaux had 14 snaps, an assisted tackle and offering good technique in shedding blocks. In just eight snaps, Walker set a good edge on run plays, getting off the ball quickly on pass plays.

It was George Karlaftis of the Kansas City Chiefs making the best first impression at that position. He finished Kansas City’s first preseason game with a sack, tackle for loss as well as a pair of quarterback hits. Looking quite fast and quite polished, and the motor was as advertised.

Karlaftis is currently paying +1800 to win Defensive Rookie of the Year, looking like good value going into the second game.

The latest draft had its share of wide receivers. and it’s wideouts dominating the Offensive Rookie of the Year board. Quarterback Kenny Pickett of the Pittsburgh Steelers is leading at +800, but the Tennessee Titans’ Treylon Burks (+1000), Skyy Moore of the Kansas City Chiefs (+1000), Chris Olave of the New Orleans Saints (+1000), George Pickens of the Pittsburgh Steelers (+1000), the Atlanta Falcons’ Drake London (+1400) and Garrett Wilson of the New York Jets (+1600) are all among the favorites.