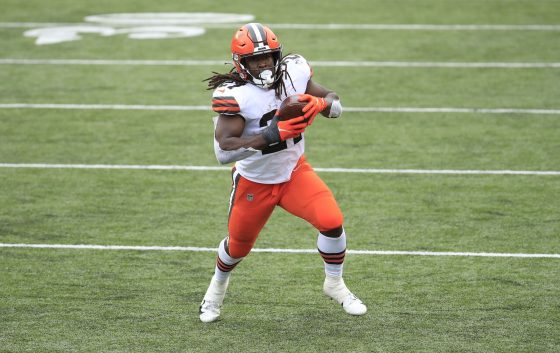 CINCINNATI, OHIO – OCTOBER 25: Kareem Hunt #27 of the Cleveland Browns runs for a touchdown against the Cincinnati Bengals at Paul Brown Stadium on October 25, 2020 in Cincinnati, Ohio. (Photo by Andy Lyons/Getty Images)

The Cleveland Browns say that they will continue to keep both Nick Chubb and Kareem Hunt in their backfield, despite the report that an unhappy Hunt has asked for a trade.

Hunt has wanted a contract extension from the team. That hasn’t happened, and he skipped a couple of days of drills during training camp. However, he did return for Sunday’s practice.

Hunt is set to make $6.25 million in his pact’s final year. He will be 28-years-old when a free agent, and he’ll already have six years of NFL running-back wear and tear on his body. Hunt is feeling the time for a new deal is now.

The average career for an NFL running back is 3.3 years, with declining rates of production beginning at the aforementioned age of 28. That is according to a study by Pro Football Reference. Hunt is requesting to be paid like a featured back in the NFL, or be traded to a team that will pay and play him like he’s one…while he can still get the cash.

The Browns are paying +2500 to win the title, according to Super Bowl odds. and Nick Chubb is paying +900 to lead the NFL in rushing. That’s tied for third-shortest odds in the league. Kareem Hunt, meanhile, is a rank outsider at +15000.

Chicago doesn’t have a lot invested in wide receiver N’Keal Harry. The Bears only traded a seventh-round, 2024 draft pick for the former first round pick of the New England Patriots. They were hoping he’d add depth to their weakened wide-receiver room, remembering what made him the 32nd overall pick in 2019.

However, unfortunately at Saturday’s practice, Harry suffered what has been diagnosed as a high ankle sprain, and his availability for the season is unclear.Harry has played in 33 career games in his four seasons in the league, catching just 57 passes.

As a rookie in 2019, he suffered a grade-two ankle sprain that cost him nine games. Harry missed two games in 2020 (concussion), and last season. he missed four games with shoulder and knee injuries.

After Darnell Mooney, Byron Pringle and Equanimeous St. Brown, the Bears are very short on capable and experienced wide receivers. If Harry is out for a significant amount of time, which is often the case with this type of injury, look for Chicago to make a move for another wideout.

Having lost cornerback Charvarius Ward and safety Tyrann Mathieu to free agency, the Kansas City Chiefs cut ties with another member of the secondary from last season. Deandre Baker, a former first round pick of the New York Giants, came to Kansas City in late 2020, appearing in 10 games with the Chiefs.

Baker had a good rookie season with the Giants in 2019, 61 tackles and eight passes defensed. He was arrested in early 2020 on armed-robbery charges. Charges dropped, as was Baker. He was on the NFL’s exempt list before the Chiefs decided to take a chance on him.

KC lost several members of its 2021 secondary, but it added three cornerbacks through the draft in Trent McDuffie, Joshua Williams and Jaylen Watson. The club traded for former Houston Texans’ cornerback Lonnie Johnson, and also returns L’Jarius Sneed and Rashad Fenton. Baker no longer figured in the Chiefs’ plans for 2022 and beyond.

Baker only turns 25 the first week of September, and will probably get a shot with another NFL team in the near future.

As per NFL odds, Kansas City is +450 to win the AFC title, or second choice to the Buffalo Bills.

2022-08-09
Previous Post: Thoroughbred Makeover Diary: ‘Pulling Out All the Stops’ with Finnick the Fierce
Next Post: Montana Casino Robbed at Gunpoint, Suspect Flees With Cash