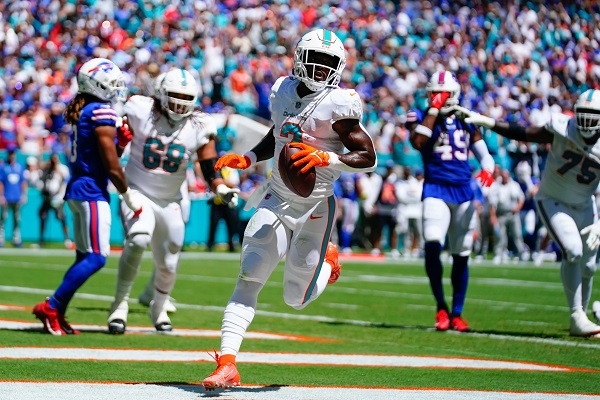 When closing the book on Week 2 of the NFL, there were a number of incontrovertible truths. The Buffalo Bills and Kansas City Chiefs were easily the best teams in the league, while the Atlanta Falcons and Carolina Panthers were two of the worst teams. The AFC West was the toughest division in football, and the two thoroughly disappointing teams were the Tennessee Titans and Cincinnati Bengals.

What a difference a week makes.

Through the first two weeks, there was actual talk about a possible perfect season by the Bills. They slapped the Rams and Titans, looking to be head and shoulders above any other team.

If you only looked at the stats in Week 3, that same narrative would still work. Buffalo did run 90 offensive plays to just 39 by the Miami Dolphins. Buffalo did outgain Miami 497 yards to 212. Somehow, the Bills managed just two touchdowns, field goal and a butt-punt safety; Buffalo lost 21-19, after some poor time management (both halves), and it’s the Dolphins in first place.

Despite losing, Buffalo is remaining the 9-2 (+450) favorite to win the title at Super Bowl odds.

Just a week ago, we were reading (and writing) the Indianapolis Colts’ last rites. They were coming off a tie to a bad Houston Texans’ team before getting whitewashed, 24-0, by the Jacksonville Jaguars. Next was the home opener against a 2-0 Chiefs’ team with 10 days rest. Kansas City was a cinch to go 3-0, and Indy’s season was already wasted away.

An abusive language personal foul that extended the final drive, combined with a missed extra point and short field goal by the Chiefs (plus muffing a punt in the first quarter) all conspired to doom the visitors, who lost, 20-17.

Indianapolis didn’t look great in the game, but managed a 76-yard drive late in the game (aided by that personal foul) to prevail. Season’s been salvaged, at least this week.

When the AFC West added Davante Adams to the Las Vegas Raiders and Russell Wilson to the Denver Broncos, all the talk was about what a gauntlet it would be this season. The teams would devout one another, but outside the division, they’d be dominating the rest of the league.

The Raiders keep having opportunities to win games in the final moments, but lose them. Vegas lost, 24-22, at the previously-winless Tennessee Titans, an unsuccessful two-point try finishing it. At 0-3, the Raiders are the NFL’s only winless team.

Cincinnati had been written off as a defender of their AFC title. They lost-to Mitchell Trubisky-in Week 1, then lost in Week 2 to Cooper Rush. Quarterback Joe Burrow was getting sacked at a record rate in spite of the revamped offensive line, with twice as many turnovers as touchdowns.

It was only the New York Jets Joe Flacco that Burrow and the Bengals beat this past Sunday, but they looked good in a 27-12 win at the Meadowlands. Burrow was sacked just twice, he threw three touchdown passes, and even though Ja’Marr Chase was held to just 29 yards, Tyler Boyd and Tee Higgins combined for 198 yards.

There is hope again in Cincinnati, where the Bengals are priced at +1400 to repeat as conference champions. That’s according to NFL odds.

This Ain’t a Typo

For the first time since Week 3 of last season, both the Atlanta Falcons and Carolina Panthers recorded wins at the same time. Each was also their first victories of this season.

It was Atlanta’s offense getting both Drake London and Kyle Pitts involved in the same game, while the reliable Cordarrelle Patterson led them to a 27-23 win over the Seahawks in Seattle.

Carolina was able to put together a more complete win against a better foe Sunday, beating the visiting New Orleans Saints, 22-14. It also (temporarily) took coach Matt Rhule off the hot seat.