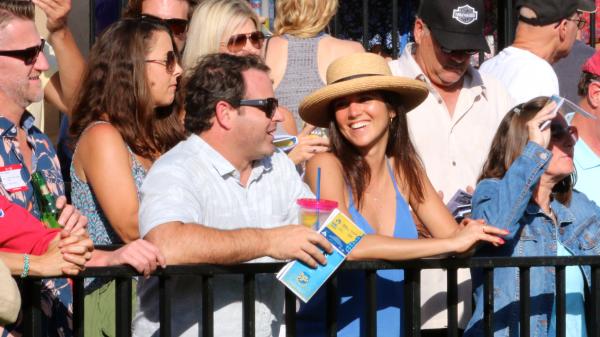 Here are a couple of plays to try to beat the big favorites in both of this weekend’s $1 million stakes races, Saratoga’s Jockey Club Gold Cup and Del Mar’s Pacific Classic. Best of luck.

Which version of #2 Olympiad will show up – the horse that won five in a row including the Grade 2 Stephen Foster Stakes at Churchill Downs on July 2, or the horse that flopped last time out at Saratoga in the Grade 1 Whitney Stakes on Aug. 3? The connections of Olympiad are hoping for some redemption in this Saturday’s Jockey Club Gold Cup after the colt’s winning streak came to an end last time out with a disappointing fourth-place finish at 3-2 odds in the Whitney. Everyone is entitled to an off day, but the effort of Olympiad was so sub-par last time out that it makes betting him again on the same track and at low odds too tough of a pill to swallow.

Since Olympiad will be favored, it creates a prime opportunity to bet against him by looking elsewhere in the eight-horse field. The best chance at an upset belongs to #8 Dynamic One trained by Todd Pletcher at 7-2 odds on the morning line. Dynamic One has really gotten good in his last two outs, including a win in the Blame Stakes at Churchill Downs and a win last time in the Grade 2 Suburban Stakes at Belmont Park. The Suburban win was big for today’s purposes, because it came at the same distance the Jockey Club Gold Cup will be held at, 1 ¼ miles. Add that win to Dynamic One’s Saratoga win last season in the two-turn Curlin Stakes, and you have all the ingredients for an upset with Saratoga leading rider Irad Ortiz Jr. aboard. Pletcher actually trains four of the eight horses entered in the race, and he is sure to keep the pressure on Olympiad at every moment with his line-up that also includes #3 Untreated, #5 Americanrevolution, and #7 Keepmeinmind, the latter of which is another long-winded type who would also benefit from a fast pace.

The Play: Bet against favored #2 Olympiad and instead bet #8 Dynamic One to win. Play both in a three-horse exacta box along with #7 Keepmeinmind.

#8 Dynamic One to win

This year’s highly anticipated Pacific Classic is all about #5 Flightline, the undefeated top-ranked horse in the country who will be attempting to push his career record to a perfect 5-for-5. Few horses can match him in terms of his talent or the speed figures he’s earned in his five victories, which have all come by between six and 13 ¼ lengths. As a racing fan you want him to win and continue on the path to becoming a super horse. As a bettor, however, today is the day you are supposed to wager against him. He has yet to race beyond one mile and has not yet even been around two turns, but his odds in the Pacific Classic will be at or near his morning line of 1-5 – way too low for any horse trying to stretch out all the way to 1 ¼ miles.

The results of this race will determine Flightline’s future. If he wins, his next outing is likely to be the Longines Breeders’ Cup Classic where he will be the heavy favorite. If he loses the Pacific Classic it will likely be the distance that gets him beat. There are two horses in the Pacific Classic field who have the ability and the long-distance credentials to hand Flightline his first loss, if indeed he does have distance limitations. Those two horses are #2 Country Grammar and #4 Express Train.

The preference goes to Country Grammar, the 2022 winner of the $12 million Dubai World Cup Presented by Emirates Airline and the runner-up of the $20 million Saudi Cup who also owns a 1 ¼-mile win in last year’s Grade 1 Hollywood Gold Cup Stakes for trainer Bob Baffert. He’s coming off a loss to #3 Royal Ship in both horses’ last starts in Del Mar’s San Diego Handicap, but Royal Ship was in mid-season form and Country Grammar was making his first start since returning from the Middle East. Country Grammar will improve leaps and bounds for this race, which has been circled on Baffert’s calendar for a while. The other horse to fear is Express Train, who seems to trade wins and losses with #6 Stilleto Boy, but is clearly the superior horse out of that duo once the distance stretches to 1 ¼ miles. Express Train won the Grade 1 Santa Anita Handicap Presented by Yaamava’ Resort & Casino at this distance. He also loves Del Mar with a career record of three wins and a second in five starts.

The Play:  Roll the dice and try to beat Flightline because it’s now or never and Flightline’s odds will be way too low. Is he a monster? We’ll find out in the Pacific Classic. If he’s not a monster, you might as well make some money with a high-quality horse like #2 Country Grammar, who is 4-1 on the morning line. While you’re at it, go ahead and throw #4 Express Train into the exactas.