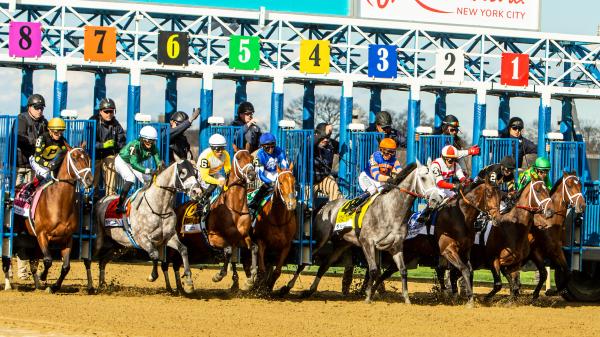 Did you know that Aqueduct has four stakes on its Saturday card this week, including two races worth $500,000 apiece? On an otherwise pretty quiet weekend in racing, Aqueduct is the place to be Saturday with a 10-race card that will be giving away a ton of money. Read on for a pair of selections for two of Aqueduct’s Saturday stakes. The Big A is about to take its holiday break and will be dark all next week. Go ahead and admit it, you’re going to miss is when it’s gone.

The Alex M. Robb Stakes has drawn a very competitive eight-horse field of New York-breds going a mile and has attracted many of the principal runners in the state-bred division of 3-year-olds and older going this distance, including horses like #4 Somelikeithotbrown, #6 Sea Foam, and #8 Dr. Blute. From a handicapping perspective, one thing jumps off the page at you as you look at this race: Nearly every horse in the field wants the lead and there is very likely to be a multi-horse scrum up front on what should percolate into a blazing pace. That should set it up for any horse that has the ability to rate, and the best horse in the field that fits that description is #5 Barese, a 3-year-old trained by Mike Maker with plenty of tactical speed in two-turn races who should be comfortably off the pace at this one-turn mile trip. He’s a two-time New York-bred stakes winner including the $150,000 New York Derby this year, and he has never been in better form than now based on the narrow nose loss last time out versus open company in the $150,000 Discovery Stakes. He’ll be the main beneficiary of the pace scenario in this race, and he’s good enough to win the race anyway, so that makes him the horse to beat. Since pace makes the race, why not play the exactas as well with a dark horse like #1 Market Alert for trainer Rob Atras? He won the $100,000 Saginaw Stakes this summer in a similar kind of spot in a one-turn 1 1/16-mile race at Belmont where he laid off a fast pace and ran them down late. He can post the upset today with a repeat of that day’s stalking effort.

Saturday’s two divisions of the New York Stallion Series – one for fillies and this one for males – are paying big purse money to horses from nominated New York sires, giving seemingly average-looking 2-year-olds the chance to run for half million-dollar purses. With that kind of money on the line, you can see why trainers would be anxious to enter their eligible juveniles in this spot whether they actually make sense in the race or not. Some of these horses are maidens and a couple others are first-time starters, while a couple of the other top contenders on the morning line are turf horses who don’t even run on the main track. The horse in the race with the best dirt form is #1 Jackson Heights, who two races ago won the $121,000 Bertram Bongard Stakes on this track and at this distance. He disappointed last time out in the $200,000 Sleepy Holly Stakes at a mile, but that’s why you’re getting 7-2 odds today on a horse that lays over this field based on his best effort. The horse in the race who has the best last-race Beyer Speed Figure and therefore the best recent dirt form is 10-1 on the morning line, and that is #4 General Banker. He’s still a maiden but has improved a lot in his last two races and is trending toward the maiden win. Wouldn’t this be a great place to get it?