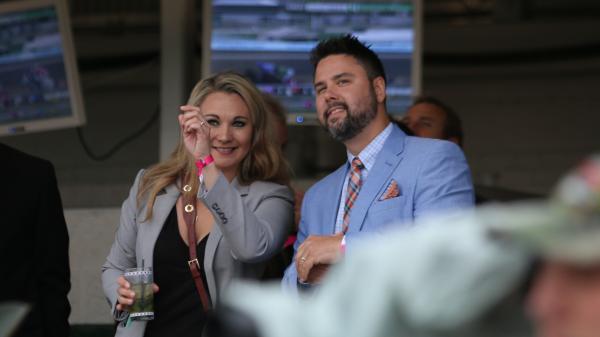 Saturday Oct. 1 will be one of the premier days of the season at the brief Churchill Downs September meet, with an 11-race card that features a pair of graded stakes races, including one – the $300,000, Grade 3 Ack Ack Stakes – that is a Breeders’ Cup “Win and You’re In” race.  The late pick 4, which also includes the $500,000, Grade 3 Lukas Classic Stakes, kicks off with race 8. Here are selections for the first two legs of the pick 4, including an exacta play in the Ack Ack. Best of luck.

This 1 1/8-mile allowance race starts the late Pick 4 and drew a big 11-horse field that will give handicappers fits who are trying to construct affordable Pick 4 tickets. Despite seemingly looking like a wide-open race, however, the race actually features a standout contender, and that is #7 Strong Quality, who is 7-2 odds on the morning line but whose chances are actually much better than that. Last time out Strong Quality returned from a five-month layoff with a very solid second-place finish by a length in a strong Saratoga allowance race at the distance of one mile, which made the race feel like a prep. Strong Quality won his maiden race in a two-turn route race at Fair Grounds earlier this year and followed it up with a close second back in another two-turn race against allowance optional claimers. His speed figures stand out against this field for trainer Mark Casse with Ricardo Santana Jr. aboard, and the stretchout to 1 1/8 miles around two turns today makes him the horse to beat. For those looking to play exactas and add value to your tickets, #6 Elusive Target is a very interesting contender listed at 12-1 odds on the morning line. Elusive Target came to the barn of trainer Paulo Lobo and returned from a five-month layoff last time with a career-best speed figure in a much improved-looking runner-up effort, closing to within a half a length racing one mile at Ellis Park. He looks like a horse that will benefit from the added furlong at 1 1/8 miles today in his second start off the layoff.

The Play: Bet #7 Strong Quality to win and box him in the exactas with #6 Elusive Target. If you are starting Pick 4s in this race, use both horses to kick off the first leg on your tickets

Saturday’s co-featured Ack Ack Stakes drew a 10-horse field of horses seeking a “Win and You’re In” berth into the Big Ass Fans Breeders’ Cup Dirt Mile. The Ack Ack is run around one turn and that one-turn, one mile distance looks like a key factor in trying to handicap the race. A couple of the race’s prime contenders look better in shorter sprints, and some other top contenders seem as though they might prefer a two-turn race. The two horses in the field that seem perfectly spotted for success are #5 Three Technique and #2 Untreated, and it is that duo that deserves your attention as you fill out your Pick 4 tickets and plan your win and exacta bets in the Ack Ack. Three Technique is being vastly undervalued in the morning line odds at 12-1 for Jason Cook, a trainer with a small stable who wins at a high percentage. Three Technique has been focusing his efforts in Churchill’s one-turn miles with a win in May’s Knicks Go restricted stakes race, and he followed last time out with a strong second-place finish earning a big-time speed figure. The horse that beat him that day, by only a neck, was Cody’s Wish, who came back in his next start to upset heavy favorite Jackie’s Warrior in the Grade 1 Forego Stakes at Saratoga. Cody’s Wish’s effort flatters Three Technique enough to make him a worthy selection in today’s Ack Ack at a nice price. The horse to use in exactas is Untreated for trainer Todd Pletcher with John Velazquez aboard. Untreated has been competing in longer routes against high quality graded stakes competition, but perhaps the problem in his recent losses is that he’s actually meant to be a miler who has been in need of a cutback in distance like he’s getting today. His career record racing at or about a mile is 2-for-2, with two of those coming in fine fashion on Aqueduct’s one-turn mile layout.

The Play:  Bet #5 Three Technique to win and play him in an exacta box with #2 Untreated. Use both horses as you continue to construct your tickets for the late Pick 4.

Noel’s Weekend Winners finished the month of September with another winning exacta among his two plays last week, totaling three winning exacta plays from a total of eight races he picked last month.