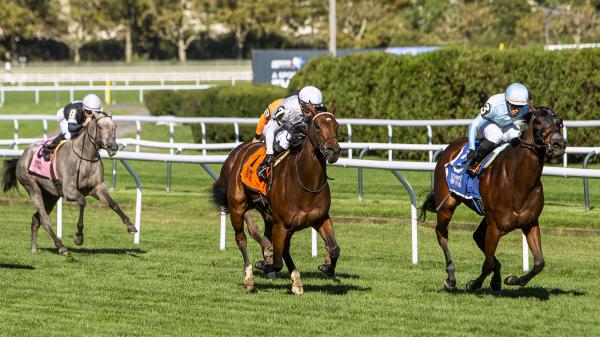 The Belmont fall meet is always loaded with high-quality turf racing, and this season has been no exception despite the unique nature of this year’s meet as it is run at nearby Aqueduct. The resulting meet, termed “Belmont at the Big A,” has had all the hallmarks of the typical Belmont fall season for simulcast players. Thanks to Aqueduct’s ample turf courses, the meet has not lacked quality on the lawn, and plenty of good grass racing remains this fall. A prime example of that is happening this Saturday. The day’s 10-race card is headlined by the Grade 2, $300,000 Hill Prince Stakes on the turf, and there are also several other good grass races to choose from Saturday, including a six-furlong turf sprint with a full field in the nightcap.  Let’s hope the weather holds out so we can have a big day at the Big A. Best of luck.

Saturday’s featured race at Belmont at the Big A is the Hill Prince going 1 1/8 miles on the turf for 3-year-olds. #1 Celestial City exits a win on this turf course last time and has earned consistently high speed figures in all of his recent races during the second half of the year, including a solid third in the Grade 2 National Museum of Racing Hall of Fame Stakes at Saratoga three races ago, and a second two races back in the Grade 3 Saranac Stakes behind Annapolis, who flattered Celestial City when he came back to win the Grade 1 Coolmore Turf Mile at Keeneland in his next race. Celestial City looms the horse to beat, but there are a couple of Chad Brown-trained horses in this race, and when that’s the case in a race like this it’s tough to ignore. This is a good spot for #8 Unanimous Consent, who seems primed to take a step forward today in what will be his second start back from a three-month layoff. Unanimous Consent began his career with three straight grass wins including the $100,000 Woodhaven Stakes right here on this Aqueduct turf course

Saturday’s nightcap is as good a betting race as there is on the card, so let’s swing for the fences with some exacta and trifecta boxes that could yield strong payoffs. The temptation in this race could be to go for the favorite, #9 Not Phar Now, coming out of a win on this course with a fast speed figure, but he enjoyed a clear lead last time and liked the yielding turf. He may enjoy neither of those benefits Saturday as the weather looks good and pressure up front is expected from #5 Phantom Smoke. Who can take advantage? The #3 Deep Cover also has speed, but he should get a better trip today than last time when he lost to Phantom Smoke at Saratoga in a race in which he was in tight on the rail when full of run, forcing the rider to back out and shift outside without enough real estate left with to get back up in time for the win. He was a half a length short but can turn the tables here with a clean trip. #4 Neuro has two recent races and they were both good. He ran well for second by a nose off an eight-month layoff despite losing his best chance when left behind at the break, then he came back to score a sharp Spa win last time. #1 Ghost Giant came off a breakthrough victory over Not Phar Now at Saratoga two races ago and then last time got blocked in traffic into the stretch and had to settle for fourth. He’s won on the Aqueduct turf before and can win with a clean trip, plus, you get the live #1A Klickitat thrown in as a bonus.