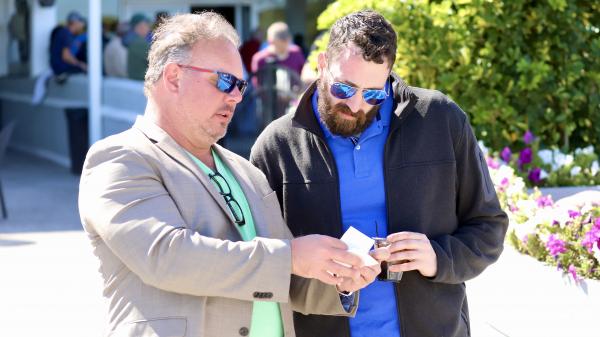 No one in horse racing can steal Santa Anita Park’s thunder on Dec. 26 for its annual, unofficial kick-off to the new racing season the day after Christmas, but that certainly won’t stop the Fair Grounds from trying. The New Orleans-area track has scheduled an incredible Dec. 26 program of its own this year with nine $100,000 stakes races headlining a 13-race card. The day lacks graded stakes but makes up for it with good fields and highly bettable races including the first in Fair Grounds’ series of winter Kentucky Derby Presented by Woodford Reserve prep races, the Gun Runner Stakes. Read onward for a pair of Fair Grounds stakes selections for Monday, Dec. 26, and enjoy what figures to be a great day of racing and wagering for horseplayers. Best of luck.

The Scherer Memorial is a six-furlong race for 3-year-olds and up that has drawn a compact but very evenly matched seven-horse field where you could make a case for just about any of them. It’s hard to deny the recent credentials of likely favorite #7 Manny Wah, who won the Grade 2 Stoll Keenon Ogden Phoenix Stakes at Keeneland and then was a surprising fourth in the Qatar Racing Breeders’ Cup Sprint. The knock against betting Manny Wah in this spot, however, is that he apparently loves Keeneland, but Fair Grounds … not so much. He’s 0-for-6 career in the win column at Fair Grounds and therefore looks like a beatable favorite. Another of these horses in sharp current form appears to be the better bet, and that is #1 Bango, who exits back-to-back wins with strong speed figures at Churchill Downs including last time out in the $300,000 Bet On Sunshine Stakes. Getting hot and stringing wins together is a career pattern for this horse, and this seems like the perfect spot for him to extend his winning streak to three races. For the exactas, it was easy to like what you saw last time out for #6 Surveillance when he won the $175,000 Thanksgiving Classic on this track and at this distance. That win raised his career record at Fair Grounds to 3-for-3.

The Gun Runner shares the Fair Grounds Monday card with eight other $100,000 stakes races, but it is this Kentucky Derby prep race that is the unofficial feature race of the day. Eventual Kentucky Derby runner-up and Runhappy Travers Stakes winner Epicenter won the Gun Runner last year and put this race on the map in its inaugural running. Is there another Epicenter to be found in this year’s field? Well, anything is possible down the road, but for today let’s concentrate on finding the winner. To me, there appears to be plenty of pace potential in this race with horses like #6 Raise Cain and #4 Old Alliance stretching out and likely to lead while horses with tactical speed like #2 Jace’s Road and #3 Determinedly chasing closest behind. After Determinedly needed six tries to break his maiden, the best member of that lead group looks like #2 Jace’s Road, who won his maiden at first asking and then showed promise at a distance in his second career start when third in the Grade 3 Iroquois Stakes behind Curly Jack after a close-up stalking trip. The fiasco last time out in the Grade 3 Street Sense Stakes is a total toss-out after he lost his composure, ejected the rider, and freaked out during the gate load. With logical forward progression for a soon-to-be 3-year-old since the Iroquois, Jace’s Road should be ready for a test like this one today. The other horse to key on in this spot is #1 Hayes Strike, who finished fourth in that same Iroquois Stakes back on Sept. 17, where he saved ground for most of the way but was blocked when he tried a stretch rally on the rail and had to angle out. He then checked in second in the Street Sense and was third when beaten only 1 ¼ lengths in a solid outing in the Grade 2 Kentucky Jockey Club Stakes last time – just a head behind runner-up Curly Jack. Hayes Strike should be finishing fastest in the long Fair Grounds stretch run.