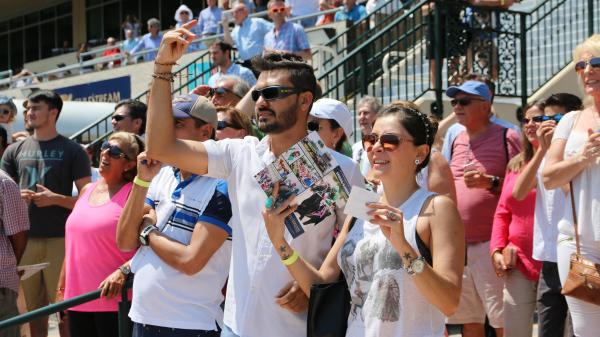 The Gulfstream Park Championship Meet is in full swing, and we are now enjoying the best season of the year for south Florida racing. The first Saturday of 2023 is ushered in with an 11-race card featuring a pair of ungraded $100,000 turf stakes, which are just the tip of the iceberg for the day’s bettable action on the card. Let’s focus on those two stakes races and try to make the first Saturday of 2023 a winning one. Best of luck.

The Dania Beach is the first of the two stakes races on the Gulfstream Saturday card for newly-turned 3-year-olds. Fillies get their turn an hour later in the Ginger Brew, but this race for colts and geldings is up first with a quality field of seven runners. Three of the seven appear to be standouts, and with only a seven-horse field to choose from, the exactas don’t seem like a lucrative enough proposition so you’re going to have to focus your horizontal bets at least on trifectas to make it worth your while. With three standouts, that makes for an ideal three-horse trifecta box. The first horse to use is #2 Major Dude, who was a somewhat disappointing ninth last time out in the Breeders’ Cup Juvenile Turf, but he drew post 13 that day and lost the race by less than four lengths, so it really wasn’t that bad of an effort. In the race before, Major Dude had won the highly competitive Grade 2 Pilgrim Stakes at Belmont at the Big A, which is an important win in its own right. The winning rider that day, likely Eclipse Award winner Irad Ortiz Jr., is back aboard for Saturday’s mount. The next horse you want in your tri boxes is #4 Congruent, who is a stakes winner at this mile distance on dirt but switched to the turf for the first time in his most recent start and actually improved in terms of his speed figures to run his best career race. The wild card in the field is #6 Souzak, who invades from France on a three-race winning streak including a one-mile race at Longchamp most recently. Those efforts likely stack up this horse quite favorably against this level of local competition.

Newly-minted 3-year-old turf fillies take center stage in the Ginger Brew, which has drawn a field of nine. The race is headlined by what appears to be one standout filly, and the tote board is likely to reflect that #3 Cairo Consort is the strong favorite and horse to beat. Making her first start for trainer Todd Pletcher and ridden Saturday for the first time by Irad Ortiz Jr., Cairo Consort has proven stakes ability on turf based on her win in the $132,000 Catch a Glimpse Stakes at Woodbine and her subsequent second-place finish in Woodbine’s Grade 1 Johnnie Walker Natalma Stakes. For good measure she added a third in the Breeders’ Cup Juvenile Fillies Turf to her résumé last time out. Both of her prior two outings came at this one-mile distance. Too much to go against in this spot, so instead the search becomes trying to find an exacta partner in this field. That role will go to #7 Navy Goat, who may not yet be in the same stratosphere as the favorite but certainly has the potential to be. Navy Goat won her first turf stretchout attempt at this one-mile distance back in September at Kentucky Downs, and her only race since then was a synthetic track stakes win at Gulfstream when the turf course was closed and no grass options existed for her on the grounds at that time. Assuming she’s actually better on turf than on Tapeta seems like a safe bet – and if that’s the case, and with the four months of growing up she’s done since her win at Kentucky Downs, a winning kind of an effort is certainly not out of the realm of possibility today and an exacta finish seems likely.

The Play:  Bet an exacta box with #3 Cairo Consort and #7 Navy Goat, and then root for the upset.