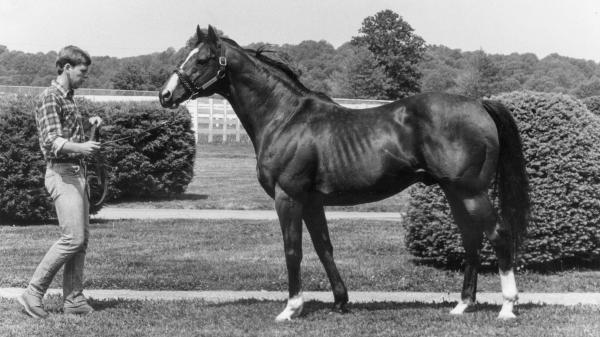 Northern Dancer: A ‘Pocket Battleship’ Who Became a Worldwide Influence

Back in the day when a truck stacked with hay rumbled into Windfields Farm, Northern Dancer never paid it a lick of attention from his stall across the lane from the breeding shed. But if he laid eyes on an approaching van with a mare aboard, all hell broke loose.

“He would rear up, rest his forelegs on the sill of the bottom half of the door, whinny and squeal as the loading ramp dropped,” laughed Benny Miller, who would become the Windfields Maryland farm manager.  “He acted like every mare on the farm would be his conquest. To calm things down we moved him to the back side of the stallion barn.”

Small and stocky, the bonny bay colt was built more like an old-style Quarter Horse than a sleek Thoroughbred. In 1962, he was offered for $25,000 at his yearling sale. There were no takers. Two years later, in the lead-up to the Kentucky Derby the press poked fun at the colt’s pint-size (15.1 hands) stature. Then Northern Dancer uncorked a jaw-dropping two-minute flat run breaking the 89-year-old track record and become the first Canadian-born and -bred horse to win the world’s most famous race.

Two weeks later, Northern Dancer swept the Preakness Stakes, and he finished third in the Belmont where some contend that jockey Bill Hartack misjudged the pace. A few weeks later, Northern Dancer returned to his native land and captured the Queen’s Plate at Woodbine.  However, his greatness was cut short by a strained tendon in that race. The “pocket battleship” won 14 of his 18 races and never finished worse than third.

Still, the best was yet to come.  Northern Dancer blossomed into one of the most influential American stallions of all time.

Edward Plunket (E. P.) Taylor, his breeder and owner, controlled the world’s largest brewery, a springboard to myriad Canadian enterprises that generated $2 billion in revenues in 1966. Upon retirement, Taylor’s prize stallion initially stood for $10,000 at Windfields Farm in Oshawa, Canada. He produced a staggering 16 winners from 18 starters. Ten of them were stakes winners.

After four breeding seasons Taylor set his sights on the top U.S. broodmares. Confounding conventional wisdom, he bypassed Kentucky and sent Northern Dancer to Chesapeake City, Md. Taylor was familiar with the region from his stays at Mrs. Allaire du Pont’s Woodstock farm in the 1960s when her gelding Kelso was racking up five consecutive Horse of the Year honors. On one particular visit the late Mrs. du Pont inquired, “Eddie, why don’t you get your own place? My neighbor lives in a falling down house, let me see if she’ll sell it.”

In 1970, Northern Dancer’s regal Irish-based colt Nijinsky II swept the English Triple Crown – the Two Thousand Guineas, the Epsom Derby and the St. Leger Stakes. Canadian-bred Nijinsky was celebrated as Horse of the Year in both England and Ireland, and the gold rush was on for progeny of Northern Dancer.

His prowess translated to stud fees that soared from an initial $10,000 for a live foal to $500,000, no guarantee, in 1984. However, private deals saw $1 million change hands for the services of the world’s top sire. Taylor was offered an astounding $40 million for Northern Dancer in 1981. He was 20 years old. One shareholder wired back: “Over my dead body!”

During the early 1980s, his yearlings were cast in a “Star Wars” auction at the Keeneland sales that pitted Ireland’s Robert Sangster and John Magnier (Coolmore Stud) versus Sheikh Mohammed bin Rashid al Maktoum of Dubai. The bidding hit its apex in 1984 when 14 Northern Dancer yearlings averaged a staggering $3.3 million — a sales record not likely to be challenged.

The late Joe Hickey was there for all the high-flying action.  A former turf writer and publicity director for Pimlico Race Course, Hickey arrived at Windfields in March 1969.

“We shared quarters in a four-stall stud barn,” related Hickey, who died in 2013 at 86. “Installed a wood floor, paneled the walls, and I was in business. Northern Dancer was a good-feeling horse and he knew he was the star. We had a lot of significant people come by to look at The Minstrel. Northern Dancer would get very impatient, start stomping his hoof. He didn’t want any horse taking his place.”

Just a few miles outside of the waterfront village of Chesapeake City, Northern Dancer romped across his kingdom.

“He was never turned out in Canada, so it took awhile before we got Mr. Taylor’s permission to turn him out,” recalled farm manager Miller.

“In the meantime, we’d find him with a foot in the hanging feed tub, a foot in the hay net, or his front feet on the doorsill of the stall looking down on you. Out in the pasture anything odd would set him off. Watching the foxhunters go by, way across the field, would really get him stirred up. We had to go out and get him. He’d be in a lather, running up and down the fence line. It was just his competitive nature. He was all heart and determination.”

There were 32 shares ($75,000 a share) in the Northern Dancer syndicate with four extra breeding rights so his normal book of mares was 36. Other early stallions, such as Royal Orbit, Impressive, Nail, and Eurasian covered as many as 50-55 mares in a season.

“By restricting the numbers, you were maintaining the vigor of the horse which I believe was why he was a stallion for so long,” Hickey explained. “It also created a terrific premium on his yearlings, as there would only be a dozen or so sold in a year.

“He was very confident, cocksure of himself.  He was like the pony in the circus – pom-poms on, monkey on his back – that’s the way he pranced out of the breeding shed.

“He was a tough horse, not mean but tough to breed. He passed on that stubborness to his sons and daughters and that’s what made them champions. I don’t think he knew he was small. He made up for it in bulk. He was like a little bull.”

Windfields is the only farm to breed and sell at auction three Epsom Derby winners – Nijinsky II, The Minstrel, and Secreto – all sons of Northern Dancer and all successful sires in their own right.

Other top-tier runners such as El Gran Senor, Storm Bird, and Sadler’s Wells were all national champions. Since Sadler’s Wells’ initial leading sire title in Great Britain and Ireland in 1990 through his retirement from service in 2008, he dominated breeding in Europe like no other stallion.

Northern Dancer’s colts and daughters, grandsons and granddaughters, and great-grand offspring have triumphed in the Irish Derbies, the Prix du Jockey Club, the three jewels of the Triple Crown and all of the Breeders’ Cup races.  His dominance is felt today in destinations as far off as Brazil and Japan.

The kidnapping of Shergar (the 1981 European Horse of the Year) ushered in radical security changes at Windfields Farm where Northern Dancer, The Minstrel, Assert, and other top-flight stallions held court. Taylor had owned a share in the prize stallion who had disappeared (and never was found) from stables of the Aga Khan in County Kildare, Ireland.

“I got a call from [Windfields Vice President] Joe Thomas with instructions to put up an eight foot high, chain-link fence around the stallion barn and turnout paddocks and to institute 24-hour security,” Miller said. “It was quite a contrast from just a few years before when we had signs out welcoming visitors and had scores of racing fans showing up.”

Taylor owned an estate outside of London, residences in Toronto, and Lyford Cay, an exclusive resort he developed in the Bahamas. Still, Taylor’s favorite place to hang his hat was his 2,850-acre flagship showplace in Maryland. In its glory years, during the breeding season Windfields was home to more than 100 farm employees with an additional eight manning the office.

Hickey fondly remembered get-togethers with his big, burly, and amiable boss during “evening stables.” The business tycoon stopped to visit with each animal.

“He would make comments like ‘seems this one wants two turns’ or ‘how far is the colt away from racing,’” Hickey remembered.  “At the end, we would sit on a bale of hay and talk. You could see his love of horses was genuine. Mr. Taylor had a couple of very stocky ponies that he enjoyed riding around the farm or over to Mrs. du Pont’s farm across the road. It was a peaceful time for him.”

Taylor suffered a major stroke while in Lyford Cay in 1980. More strokes followed. He never left the Bahamas again. For the world’s most illustrious Thoroughbred breeder, the cruel irony was that Taylor was unaware of the glory years when Northern Dancer’s sons and daughters stamped Windfields as the leading consignor at the Keeneland sales.

A former foreign correspondent and prominent political author, his son Charles took over the reins. But when Northern Dancer was pensioned in 1987, the massive income from his breeding rights vanished. In a move stunning to Windfields’ longtime employees, Charles shuttered the farm on Aug. 31, 1988.

“You could have knocked me over with a feather,” Hickey said. “I knew something was up, but I never thought they would shut it down completely. Northern Dancer was one of a handful that stayed.”

On the evening of Nov. 15, 1990, the grand old stallion came down with colic, and by early the next morning Northern Dancer’s condition worsened. Charles Taylor and veterinarian Alan McCarthy vetoed the idea of taking him to the New Bolton Center for medical intervention. Junior Clevenger snapped a lead shank to the stallion then steered him to the side of the training barn.

“The horse hadn’t been in a van for years and the vets weren’t sure he would even survive the trip up there,” said Clevenger, his caretaker. “His companion horse, TV Commercial, was brought out to be with him. His systems were shutting down and he was visibly suffering. It was the humane thing to do.”

Five years earlier, Hickey had secretly commissioned an oak casket.  The gallant champion was placed in the box draped in a turquoise cooler offset by gold piping with the name Northern Dancer scripted on it. A refrigerated van transported the horse’s body back to Windfields in Canada. A national hero was welcomed home. Northern Dancer was buried midway between the barn where he was born and the barn where he created his first classic runner.

“He was the greatest commercial sire of all time,” Hickey observed. “They’ll be selling horses for a lot of years to come but they’ll never experience the worldwide influence Northern Dancer delivered.”