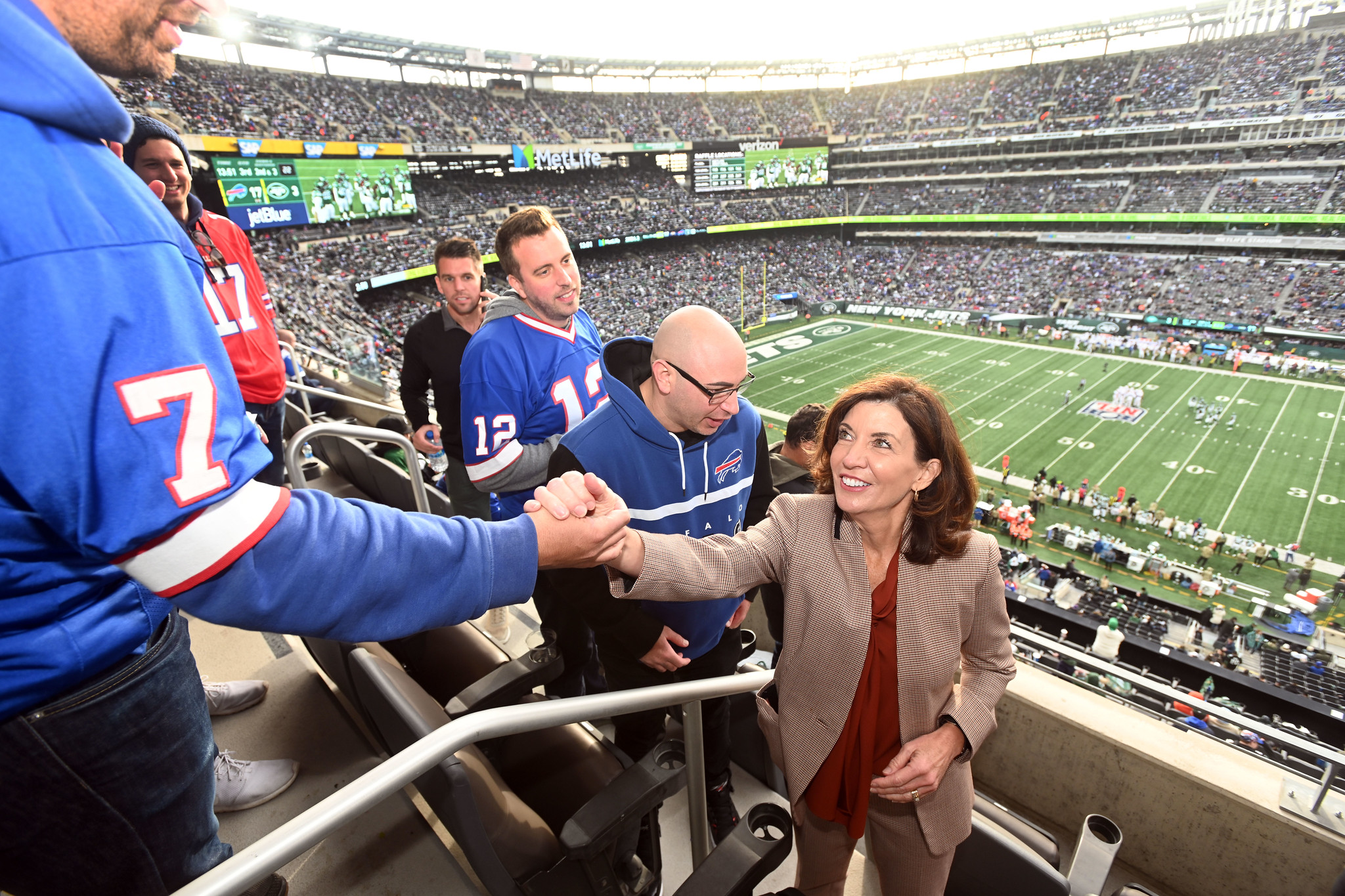 NY Jets Have a Mini QB Controversy As Heavy Underdogs vs. Buffalo Bills

Zack Wilson may be looking over his shoulder Sunday while also listening to whether the crowd chants, “Play Mike White!”

The Jets have elevated White ahead of Joe Flacco to be the primary backup quarterback behind Wilson, the No. 2 overall pick in the 2021 draft. And with their biggest test of the season coming against the East-leading Buffalo Bills. it would not be surprising for Jets head coach Robert Saleh to turn into Captain Hook and give White a shot … especially if Wilson is as inept as he was a week ago against New England.

Wilson had 23 completions, but three of those went to players wearing Patriots uniforms.

All 3 of these are the latter. pic.twitter.com/zIBwIONE8O

These were particularly egregious interceptions, and the second-year quarterback from BYU now has five interceptions and three touchdown passes. That’s along with being the 28th-ranked quarterback in terms of passing yardage with 1,o48 yards. If you double that number, Wilson still does not have the same passing yardage total as Josh Allen of Buffalo, who has played seven games and is 69 yards behind No. 2 Tom Brady and 131 behind league-leading Joe Burrow of Cincinnati, both of whom have played eight games to Allen’s seven.

Jets coach Robert Saleh made a game-day announcement last week that White would be the new No. 2 quarterback, and Flacco was inactive. Saleh said all the right things over the course of the week, saying Wilson remains firmly entrenched as the starter. But by way of comparison, basketballers Kyrie Irving and James Harden were firmly entrenched as starters earlier this week, until all of a sudden they were not.

Jets backup QB Mike White is wearing a shirt with TE coach Ron Middleton’s face on it today. The shirt has a line Middleton used when he coached the Senior Bowl earlier this year: “Everybody wants to go to heaven, but nobody wants to die.” pic.twitter.com/DcS0dxLHrI

What is Wilson Up Against vs. Buffalo?

Wilson will not only be going against the Super Bowl champion favorites (+230), but also the MVP favorite in Allen (+125). That’s along with the +1000 fifth choice for Offensive Player of the Year, Jalen Suggs. The Bills are coming off a 27-17 primetime victory over Aaron Rodgers and the Green Bay Packers, and have won four straight, including a marquee matchup against Patrick Mahomes and the Kansas City Chiefs two weeks ago. The Bills are tied with the Vikings for the second-best record in the league (6-1), and they are 11 1/2-point favorites — the second-highest line on the board.

What’s more, the Bills have yielded only 98 points all season. That’s 65 fewer than the Patriots defense that shut down Wilson and the Jets a week ago in a 22-17 loss in which the Jets had only 51 rushing yards in their first game without Breece Hall. Yes, Wilson threw for a season-high 355 yards on 20-for-41 passing, but the three interceptions were killers, and he was sacked twice for 19 yards.

The Bills are led by linebacker Von Miller (six sacks), who anchors a defense that allowed only 298.1 yards, the third-stingiest in the league.

Von Miller, embracing the #BillsMafia life: “… The food is great here. I think Marv Levy, he said, ‘A lot of people, they don’t want to come to Buffalo. But when you come here, you don’t want to leave,’ and that’s me in a nutshell.” pic.twitter.com/bSvTCJzptr

The Jets have gone under in their last three games, and the elation over their 4-2 start has been tempered by their loss last week to the Patriots. That’s along with the expectation that they are about to go up against more than they can handle against the AFC leaders. They are +460 on the moneyline, more than four times what the worst-in-the-NFL Detroit Lions are getting against the Bears (+108).

So this has all the making of a bloodbath. But MetLife Stadium will be sold out.

Another big test in our house. pic.twitter.com/PdvzoQKRIw

“This team is good,” Wilson said. “But we’re a good team. We’re close, and things are getting closer every week. For us, it’s going out there and taking the challenge and understanding that we can beat these guys. … I had some plays in the last game that just weren’t smart, and I’ve got to take those out. Sometimes, interceptions are going to happen when the defense makes a good play, and you can live with those. But I’ve got to be better with the other ones.”

What’s Out There Player Prop-Wise?

There is no over/under on Wilson’s interceptions (because the sportsbooks in New York are still lacking in creativity). But the over/under on Miller’s sacks is 0.75 (-110). Draft Kings has a +700 player special on Allen having at least 300 passing yards, 40 rushing yards, and one rushing touchdown. The rub there is that the MVP favorite has rushed for a TD only twice all season, in Weeks 1 and 4. Jalen Suggs has had one TD reception in each of the past three weeks, and DraftKings has a prop of Diggs and Tyreke Hill of the Dolphins having at least two TD receptions. Hill had two in Week 2 against Baltimore and has not had one since.

For the Jets, we have to assume again that Wilson will be throwing more than the Jets will be running.

Wide receiver Elijah Moore, speaking to reporters for the first time since the trading deadline, acknowledged being unhappy with his role — but said he’s moved on. “Definitely, I’m human,” he said. “I have my moments. Every day I wake up, it starts over. It’s a new day, so I feel good.” His role this week is unclear. Offensive coordinator Mike LaFleur hedged on whether Moore will get more snaps than last week, while Saleh said they will try to get him more chances.

Moore is +9000 at Draft Kings to have the most yardage of any receiver, which we would counsel is only for the most die-hard of Jets’ die-hards. (The shortest odds are on Justin Jefferson of the Vikings at +800, while Hill is second at +850 and Diggs is fifth at +1200.) The lowest number for any Jet is Garrett Wilson at +3500. And hey, if you like one Wilson (and not his backup) and believe in the other Wilson, +3500 ain’t all that shabby for a guy who caught six passes for 115 yards last week.

And if he catches those passes from White, it will not matter. The guy is now the best rookie on Gang Green, what with Hall out for the season, and is +2200 to be Rookie of the Year.