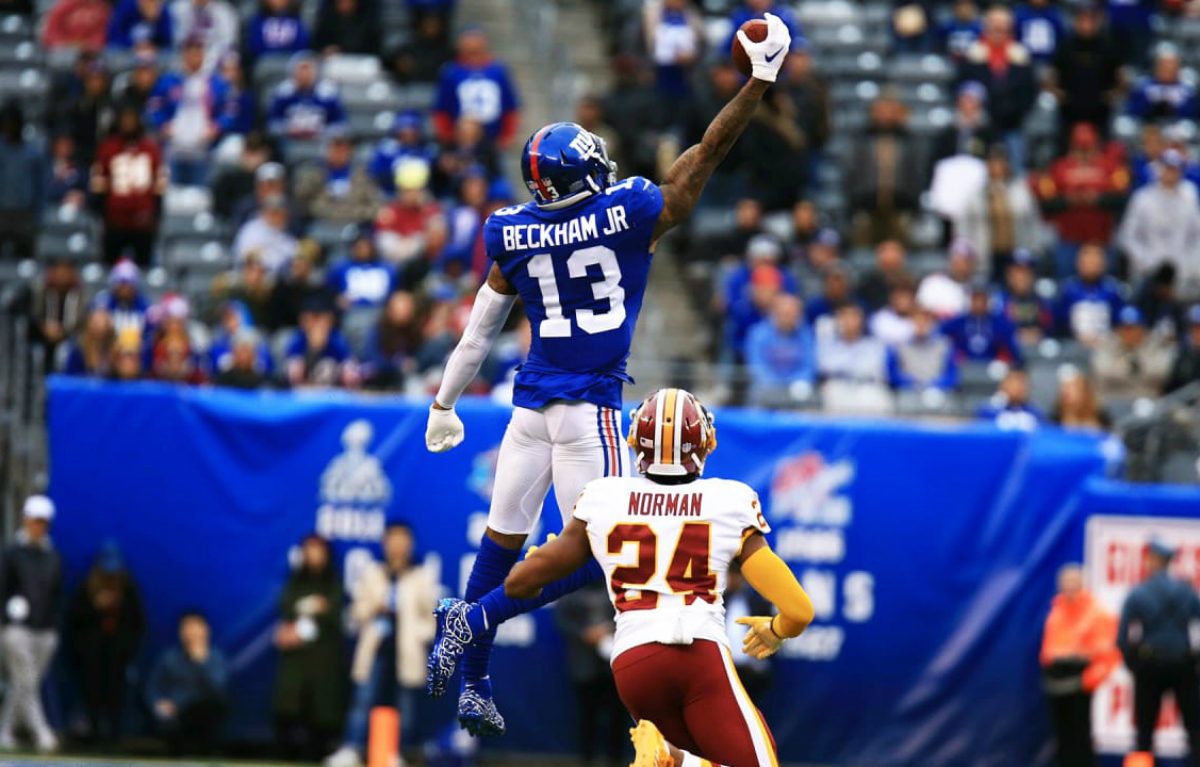 Odell Beckham Jr. Is Not Going to Save New York Giants vs. Washington Commanders

Odell Beckham Jr.’s meeting with New York Giants ownership, front office, and coaching staff garnered all of the attention late this week. That’s for a team that has not won a game against a quality opponent since Oct. 16 against Baltimore.

Yes, the Giants still have a nice record, but they have lost two in a row, are still ravaged by injuries, and are about to face a Washington Commanders team that is rolling.

So the line of Giants +2 1/2 makes a lot of sense, even with the game being played at MetLife Stadium, with New York having had 10 days of rest since their Thanksgiving Day loss to the Dallas Cowboys. Except where it makes no sense and has been lowered to Giants +1. More on that below.

New York’s defensive backfield remains staffed by backups, and their receiving corps is still thin … which is why the courting of Beckham began Thursday, and included a high-level dinner with the flaky yet. Beckham has not played since tearing his ACL for the second time last Feb. 13 in the Super Bowl, when he was playing for the Rams.

Visits with the Bills and the Cowboys remain on Beckham’s upcoming docket, and the chances of success with those other two teams would appear to be more enticing. Buffalo defeated New England on Thursday night to improve to 9-3, and the Cowboys should emerge from this weekend with the exact same record if they do what is expected against Indianapolis, where the Colts are 10 1/2-point underdogs.

Once Beckman exits the Giants’ facility Friday afternoon, the focus should turn to what is most important: Figuring out a way to put up points against a Commanders team that turned its season around on Monday Night Football Nov. 14. They did so by forcing three second-half fumbles and handling the Philadelphia Eagles their first loss of the season, despite being 11 1/2-point underdogs. Washington has strung together three straight wins and six in the last seven games, the only loss coming by 3 points against Minnesota.

Washington is 6-1 this season with Taylor Heinicke under center, and firmly in the Wild Card race. https://t.co/rQdnO5Qb2d

Whatever Happened to Saquon Barkley?

Remember last month when there was a debate going on about whether Saquon Barkley should overtake Christian McCaffrey as the NFL’s highest-paid running back? Ah, yes, the good old days, eh Giants fans? That was before he rushed for 22 yards on 15 carries in a loss to the Lions, followed by 39 yards on 11 carries in the loss to the Cowboys.

Get this: Daniel Jones has outrushed him 64-61 on 16 fewer carries over the past two games, and Gary Brightwell got five carries vs. Dallas after having only four combined in the previous 10 games. Barkley has dropped from second to fourth among the NFL’s leading rushers.

Now the Giants have to figure out how to have a ground game against a Commanders defense that ranks eighth in the NFL in rushing yards allowed per game, and 10th in the NFL in passing yards allowed. Last week, in a 19-13 victory over Atlanta, the Falcons used four different running backs to amass 167 yards on the ground, a strategy that the Giants will be hard-pressed to replicate, given the fact that Barkley and Jones have accounted for 303 of New York’s 357 rushing carries. (Six rushes have come from wide receivers on end-arounds. Backup QB Tyrod Taylor has accounted for three, and punter Jamie Gillan has one.)

Until we see otherwise, we have to assume that the Redskins are going to be served a steady diet of Barkley up the middle and Jones scrambling, unless coach Brian Daboll starts using some of the peculiar formations and trick plays he was running every week in the early part of the season. Lately, he has been about as creative as the dude who sets the futures lines at BallyBet.

Big Blue was a big story when November began. But a blah month and the lack of a signature victory has bumped them into second place among New York metropolitan area football teams creating excitement, much to the glee of Jets fans.

Both the Giants and Jets (with identical 7-4 records)  will be kicking off at 1 p.m. EST, something that happened eight times last season and continues to happen this season after not happening even one single time from 1984 through 2009. The casual fan gets to pick between superstar of the moment, Jets QB Mike White, going against the 9-2 Minnesota Vikings, or the Master of the Predictable, Daboll, matching wits with Ron Rivera. The latter had the guts to change his team’s fortunes by benching Carson Wentz nearly two months ago.

“Why are the other NFC East teams ahead of you?”

But in New York, Giants fans watch Giants games and Jets fans watch Jets games, and never shall the two cross paths. That’s unless the party host is adept at using a split screen, or folks in green jerseys attend watering holes with their friends wearing blue jerseys.

For Giants fans, it is a question of whether Barkley will become more of a secondary option. That could come from using him more as a pass catcher than a rusher, which was common earlier this season. Barkley had 180 receiving yards in the first seven games, but has just 43 yards in four games since. His rushing yardage over/under is a mere 69.5, and he does not have a receiving yardage prop … nor does any Giants receiver as of Friday afternoon.

Jones’ passing yardage over/under is 196.5, a number he has topped in each of the last three games. Jones had 35 pass attempts against the Cowboys and 44 against the Lions, as Barkley kept getting stuffed at the line of scrimmage.

The over/under for this game is the second-lowest on the board in the NFL this week, 40 1/2, and BetMGM has seen 84% of the handle come in on the “under,” while PointsBet has dropped the line to Giants +1 because 75% of the action has come in on New York. BetMGM’s John Ewing said Commanders-Giants is the book’s most heavily-wagered game.

What Would It Take To Get OBJ Back in Blue?

The Bills are getting their meeting with Beckham on Saturday, and the Cowboys get theirs on Monday.

What Beckham does with his Sunday is a mystery, and it is safe to assume that he will cross the Giants off his list if they lose. His other two choices are just too enticing, and a loss would leave the Giants in last place in the NFC East (they are now +6000 to win the NFC East; the Commanders are +10000). New York’s next three games are against Philadelphia, at Washington, and at Minnesota, and they then play the Colts at home before closing the season at Philly.

They could use the excitement that Beckham would bring, even if they had to endure the drama.

And given recent events involving drama and Beckham, it is a safe bet that he will not be getting to Dallas on Monday via American Airlines. Jerry Jones can certainly afford a charter.

OBJ was escorted by cops to the ticketing area of the airport, I’m told.

Fun fact of the week: Kenny Golladay has four more receptions than Beckham this season. If we include all of calendar year 2022, including last season and the postseason, Beckham has a 28-9 edge.