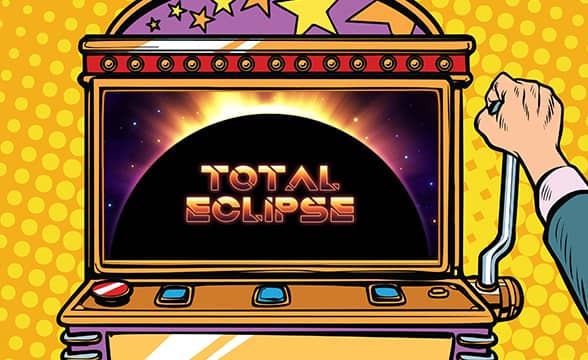 Slot developer with a strong focus on the German iGaming market Apparat Gaming has launched Total Eclipse, a fresh slot game that combines classic fruit machine and modern-day video slot vibes. The game comes with a series of captivating features, including the Hold-and-Respin bonus or the Eclipse Free Games features.

Enjoy the Rare Eclipse of Wins in the New Slot

Apparat Gaming’s freshest release introduces players to a classic 5 x 3 grid with 10 paylines that guarantee simple and unassuming action on the reels. Nonetheless, while the game might resemble a classic fruit slot machine, players will actually get to experience a few surprises. Among them, the wild symbol represented by a Star can replace the rest of the symbols and beef up the game’s overall winning potential.

The game’s action carries players to outer space, where they will come across a series of standard game symbols including lemons, oranges, BARs, horseshoes, and lucky 7s. The Eclipse symbols, however, add an extra thrill to the gameplay, especially when a minimum of five such symbols land on the reels during the base game. This is when the Eclipse Free Games round is initiated. Each of the symbols has a certain prize value attached to them.

The symbols will keep landing during the special feature. At the end of the round, the respective symbol values will be mixed and added to the win. Plus, during the same Eclipse Free Games feature, instead of the regular 5×3 grid, players will notice that every position on the grid will turn into an individual reel. Players will get to initiate the round with three respins. The counter will be reset to three every time an additional Eclipse symbol will land and be held in place.

Total Eclipse Will Launch in More Than a Dozen Regulated Markets

Apparat Gaming’s co-founder and director Alina Dandörfer announced that the company is looking forward to seeing players from more than a dozen regulated iGaming markets enjoy the rare eclipse phenomenon on their engaging reels. The game has been given the green light for launch in Germany, the UK, the Netherlands, Denmark, Bulgaria, Malta, Romania, Sweden, Spain, Isle of Man, Portugal, Switzerland, and Greece.

Germany-based Apparat Gaming is deeply rooted in the online and offline iGaming market here where it continues to develop state-of-the-art games “with a German flavor” that constantly meet and exceed players’ expectations. The developer’s products also cater to the needs of the global audience with unique slots that embody German stability and quality. At the end of February, lawmakers from Germany’s largest state North Rhine-Westphalia approved online gambling legislation and gave the green light to a maximum of five licenses.