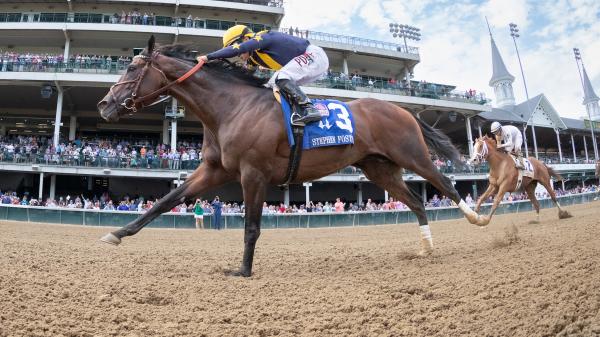 Olympiad Has the Edge Over Life Is Good in Whitney Stakes

The 2022 edition of the $1 million, Grade 1 Whitney Stakes Saturday at Saratoga Race Course is likely to be one which will be talked about for quite some time no matter the outcome, given the depth of talent in this six-horse field. The key pairing is Life Is Good vs. Olympiad, but the other four contenders all have been competitive at the level and it wouldn’t be a surprise if any of them won the Whitney, a “Win and You’re In” race for the Longines Breeders’ Cup Classic this fall.

Life Is Good brings a 7-for-9 record into the race, including wins in last fall’s Big Ass Fans Breeders’ Cup Dirt Mile and the Pegasus World Cup Invitational Stakes Presnted by 1/ST BET earlier this year, while Olympiad sports a 7-for-10 career record and is undefeated in five races around two turns including in the Grade 2 Stephen Foster Stakes last month. In spite of those two powerhouses, Hot Rod Charlie leads the field in career earnings at $5.2 million and just ran the best race of his career, although he came up a head short in the Grade 3 Salvator Mile Stakes. Happy Saver is about $12,000 shy of $1 million in earnings despite having finished second in four straight graded stakes including behind Olympiad in the Grade 2 Alysheba Stakes Presented by Sentient Jet in May. Americanrevolution won the Grade 1 Cigar Mile Handicap Presented by NYRA Bets last year and is set to improve in his third start after six months off, most recently finishing second behind Olympiad in the Stephen Foster. Zoomer rounds out the field and is no slouch as he is seeking his 12th career win, although he is winless in two previous stakes tries in his 37-race career.

Olympiad typifies what a top Thoroughbred can do as they mature, physically and mentally, over the course of their 4-year-old season. Since trying two turns for the first time this past January, he has reeled off five straight victories, four in graded stakes. In each of those races Olympiad has exuded a mental attitude to compliment his physical prowess, dominating in the stretch to win each of those stakes by two lengths or more. Most recently Olympiad won the Stephen Foster Stakes at the 1 1/8-mile distance of the Whitney Stakes with a career-best 123 Equibase Speed Figure, which only Life Is Good appears capable of matching if he repeats his Pegasus World Cup Invitational effort from January. Any questions of Olympiad running the same, or better, in the Whitney as compared to the Foster appear to have been answered when he put in an exemplary four-furlong workout at Saratoga in 47.88 seconds last week, which was the best of 51 at the distance on the day and which sends a message he will take some beating in this race.

Life Is Good may have an edge in one department over Olympiad in the Whitney that could help him win and that is he is likely to be the controlling speed in the field. Not once in his nine-race career has Life Is Good been second after a quarter mile has been run, leading to easy wins in seven of those races. Most have been around one turn, but he proved he can run longer twice, most recently when winning the Pegasus World Cup Invitational in January at the distance of the Whitney, defeating last year’s Longines Breeders’ Cup Classic winner Knicks Go and earning a career-best 123 figure while coasting to a 3 ¼-length win. After posting a poor fourth-place finish after leading early in the Dubai World Cup Presented by Emirates Airline while trying a 1 ¼-mile distance he’d never run before, Life Is Good returned following three months off to easily win the John A. Nerud Stakes last month. He earned a 115 figure in the Nerud and he is bound to improve upon that in his second start off the layoff.

As to the others, in terms of class and how fast they’ve run, Hot Rod Charlie continues to display a strong competitive spirit but also has been unable to really break through at this level, having finished fourth, second and second in his last three North American graded stakes, the best of those efforts yielding a 118 figure when he was defeated by a head in the Salvator Mile Stakes in June. Happy Saver continues to play groomsman with four straight runner-up efforts in graded stakes, including behind Olympiad in the Alysheba Stakes in May. Happy Saver ran his best race in the past year when second in the Clark Stakes Presented by Norton Heatlhcare last fall, earning a 112 figure. Americanrevolution was no match for Olympiad when runner-up in the Stephen Foster Stakes – an effort that yielded a career-best 120 figure – and I don’t foresee a reversal of that order in the Whitney. Zoomer has won three of six races this year, with two of those efforts yielding 109 figures. Even if that 109 is repeated Saturday, it’s unlikely he’ll competitive with the top contenders.