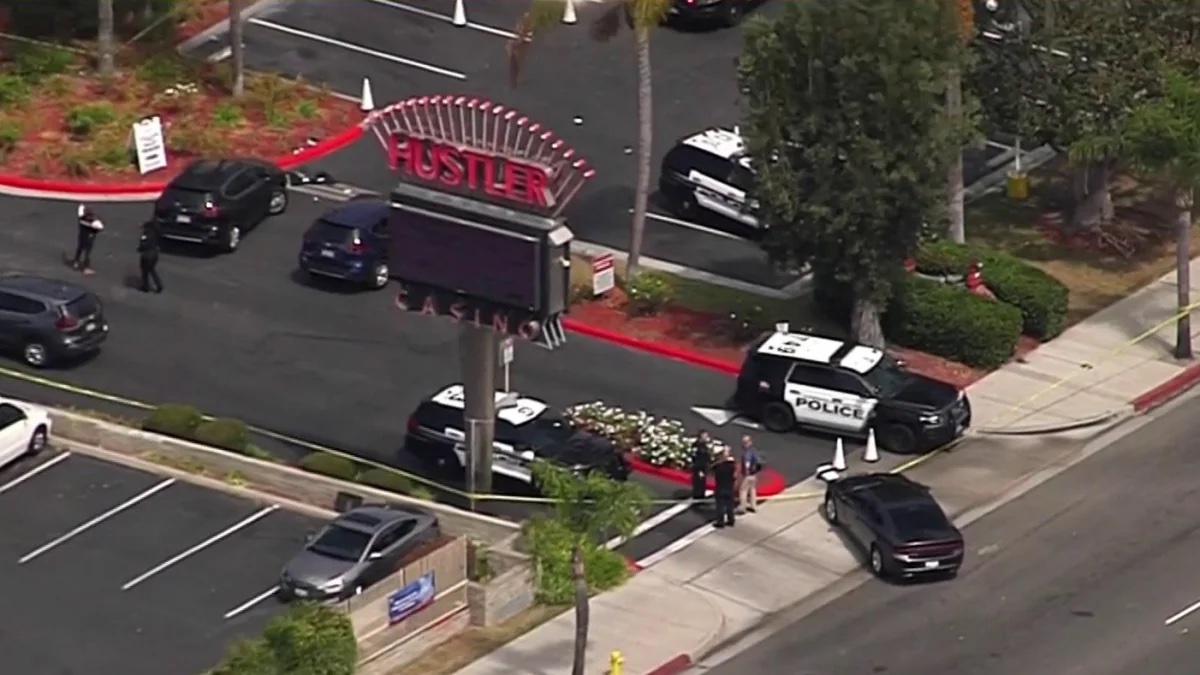 One Person Shot in Robbery at Hustler Casino

Hustler Casino was again in the headlines on Thursday, Aug. 4, after an armored truck security guard was shot during an attempted robbery by at least three armed suspects. The guard was shot in the leg and was in critical condition, but is expected to recover from his injuries.

Police were on site after an armored truck robbery at the Hustler Casino in Gardena, California. (Image: NBC Los Angeles)

According to details in a press conference by the Gardena Police Department, two guards were ambushed when they exited an armored vehicle operated by Loomis US, which was delivering cash to the casino. Gunfire was exchanged and the suspects were able to escape with an unknown amount of cash. Authorities have since confirmed the guard was the only person shot in the altercation. The other guard suffered minor cuts in the incident.

“As soon as they got out of the car, they were met with gunfire,” said Lt. Christopher Cuff at the conference.

BREAKING: Police and fire crews have set up a crime scene perimeter at Hustler Casino in Gardena after a shooting connected to a possible armed robbery attempt https://t.co/QNWZxIePpc

As of Thursday night, no arrests have been made and no descriptions of the suspects have been released to the public. One suspect was thought to have hidden inside the Moose Lodge next door, but wasn’t found. They escaped from the casino in a white sedan, but no other car details are known at this time.

When asked for comment, representatives from the Hustler Casino said they could not say anything more than what was already known to the public through the news.

Similar incidents at casinos in the past

Poker room robberies aren’t very common but they do happen. In January, an attempted robbery at Legends Poker Room in Texas was foiled when a security guard tackled the gunman. And the Bellagio Poker Room was robbed for the second time in as many years back in 2019. In that incident, the attempted robber was shot and later died from his injuries.

It’s been a tumultuous 48-hour spell for the Hustler Casino. Earlier this week, the poker room made headlines with a shocking decision to cancel their $250K Guaranteed Event after two full days of qualifying sessions had already played out. They’ve since apologized to the community, and taken several steps to help make things right, starting with refunding every player who entered the event.

Hustler Casino is located at the intersection of East Redondo Boulevard and Vermont Avenue in Gardena, in the South Bay region of Los Angeles.