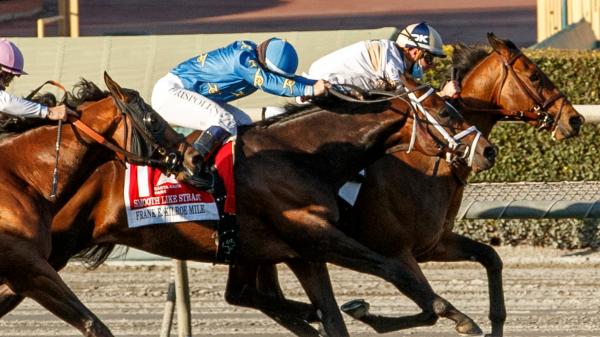 When racing fans look at the invitees for Saturday’s Pegasus World Cup Turf Invitational at Gulfstream Park, the list reads like a who’s who of major American owners. Three Diamonds Farm, Calumet Farm, Repole Stable, and Live Oak Plantation, among others, will be represented in the $1 million turf race.

In that regard, seeing a name like Taste of Victory Stables sticks out a little bit. Yet, this smallish ownership syndicate hopes to make a big mark on this year’s Pegasus World Cup Turf. They’re one of six people or partnerships involved with Hit the Road, a two-time graded stakes winner last year who will make his 2022 debut on Saturday.

Russ Sapienza is a senior advisor to Taste of Victory. Originally from Pennsylvania, he became a racing fan in the 1970s when his future father-in-law introduced the sport to him via summer trips to Saratoga. Like many owners, he evolved from fan to handicapper to owner. His professional career as a consultant in the sports and media industries fueled his interest in the business of racing as well as the demands of the backstretch.

Russ was drawn into small syndicate ownership through two events: attending a “New Owners Day” at Belmont Park hosted by Richard Migliore and then the inaugural OwnerView conference, sponsored by the Jockey Club, at Keeneland in the fall of 2014. At the OwnerView conference, he met the founding partners of Taste of Victory, Brian Richardson and Kyle Yost, and the operation grew from there. Russ officially joined the team in 2015.

Taste of Victory is based all over the country, with horses competing on both coasts. More than 200 new co-owners have bought into a Taste of Victory horse since their launch.

All partners involved in each horse have an equity stake invested, with shares that have been priced $750 to $7,500. “It’s not like a non-equity microshare”, said Sapienza. “Everyone is well-invested.” Many people involved with Taste of Victory are new to the sport and they are given the full range of the ownership experience. Last year at Saratoga, they hosted partners in the 1863 Club and took them on a tour of the Fasig-Tipton sales pavilion and the Racing Hall of Fame across the street.

Sapienza aims to create an engaging experience while also keeping a focus on winning. “We’re not just here for fun, we’re here to compete and win,” he said. “We expect our trainers to spot our horses where they can win. We hope to combine an educational experience with the thrill of winning and the ability at the highest level.

“We expose our co-owners to many aspects of the sport, from pinhooking to the claiming game to stakes action. One of our stakes-winning fillies sold for a real nice price at the Night of the Stars auction last November. And we’ve been to the Breeders’ Cup twice. Not bad for being thought of as ‘the little guys and gals.’”

Hit the Road is part of Taste of Victory’s California string and is conditioned by trainer Dan Blacker. Blacker, a graduate of the Godolphin Flying Start program, has been associated with Taste of Victory since they transferred horses over to him several years ago. Sapienza is effusive in his praise of Blacker: “He’s very hands-on, very transparent, always lets us know what’s going on”

Blacker and Boomer Bloodstock were instrumental in picking out Hit the Road from the Keeneland September Yearling Sale in 2018. He was purchased for $200,000 and instantly made waves on turf in California. He won the Zuma Beach Stakes at Santa Anita Park in October 2019, which earned him a spot in the Breeders’ Cup Juvenile Turf Presented by Coolmore America that fall. Hit the Road had a wide trip and flattened out, but it was the first Breeders’ Cup experience for Blacker and the second for Taste of Victory, and they were eager to get back.

When Hit the Road beat older horses in the spring of his 3-year old-year and then won the Oceanside Stakes at Del Mar, it reinforced everyone’s opinion that they had a seriously talented runner. He was sidelined for most of his 3-year-old season, and when returned to the races as a 4-year-old, his connections had a return trip to the Breeders’ Cup on their minds.

Hit the Road won his season debut in the Grade 3 Thunder Road Stakes, giving Blacker his first graded stakes win. Next out, he won the Grade 1 Frank E. Kilroe Mile, and in his next three starts he finished third in two Grade 2 races while preparing for the FanDuel Breeders’ Cup Mile Presented by PDJF at Del Mar. Unfortunately, the horse was diagnosed with a fever about 36 hours before the race, and was forced to withdraw.

Hit the Road has competed outside of California just once and he has never raced at the 1 ⅛-mile distance of the Pegasus Turf. That doesn’t discourage Sapienza. “Dan has been impressed by his works leading up to this week,” he said. “Let’s pray that he ships well and settles in nicely at Gulfstream. Let’s face it, every race is a test of a horse’s talent, and Saturday will be no different.”

Sapienza recommends that anyone who wants to get involved in ownership ask a lot of questions – and ask the right questions. “What kind of experience are you looking for?  Do you want to be a big fish in a small pond or a small fish in a big pond? What part of the sport interests you the most: breeding, pinhooking, the claiming game? How much capital can you afford to commit, and lose? How does a syndicate manage its costs? There are no stupid questions,” he said.

The sport would never exist without the presence of the heavily invested and massive owners like the ones mentioned earlier, but horse racing is also sustained by the growth of grass-roots type stables like Taste of Victory. Compared to some of the other owners in the field, it looks like a David vs. Goliath situation on paper… but in reality, David’s got a chance.