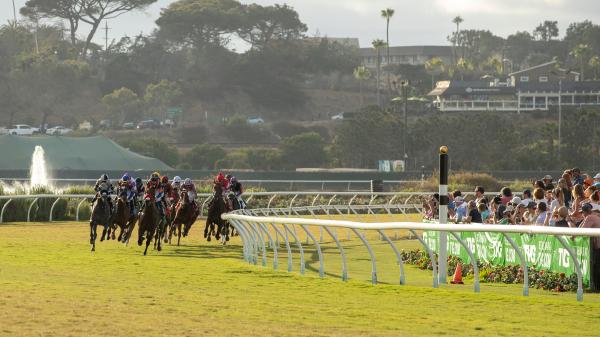 The Grade 1, $300,000 Del Mar Oaks drew a full field of 14 and promises to be an extremely exciting race considering half of the group has won a graded stakes in the U.S. or a group stakes in Europe.

Spendarella posted a pair of wins in this 3-year-old turf fillies division in March and April when victorious in the Grade 3 Herecomesthebride Stakes and Grade 2 Appalachian Stakes Presented by Japan Racing Association before a bang-up second at Royal Ascot in the Group 1 Coronation Stakes in June. Txope, who leads the field in number of races run with 12, makes her U.S. debut off a win in the Group 2 German One Thousand Guineas. Bellabel is undefeated in two starts since she was transferred to the U.S. over the winter, the most recent being the Grade 2 San Clemente Stakes on this Del Mar turf course. Cairo Memories won the Grade 3 Providencia Stakes Presented by Thoroughbred Aftercare Alliance and Grade 3 Honeymoon Stakes in succession this spring before a fifth-place effort last month in the Grade 1 Belmont Oaks Invitational. Tezzaray won the Jimmy Durante Stakes last fall at Del Mar and hopes to improve off a 10th-place San Clemente effort which followed eight months off. Lady T finished second in the Grade 2 Summertime Oaks in June before ending up fourth of 12 in the San Clemente in her first ever try on grass. Island of Love won the Grade 3 Senorita Stakes in May before second- and third-place efforts in similar stakes so is yet another very likely to be competitive in this field. Lucky Girl won the Lady Shamrock Stakes and China Doll Stakes this winter on the Santa Anita turf but has only managed a trio of fifth-place efforts since. Sixteen Arches closed fast from 11th to second behind Bellabel in the San Clemente in her second start against stakes competition and adds more depth to the field. Ballet Dancing finished third in the Honeymoon before dropping down to allowance company and flying home from 10th to second last month. That race was won by Gracelund Gray, who was returning from nearly three months off and is another who could be a factor. Rhea Moon rallied for third in that race and profiles as another filly with improving to do. Similarly, Lady Clementine finished second or third in all four starts in England before making her U.S. debut a winning one on this turf course just three weeks ago and, although stepping up from the maiden ranks into Grade 1 competition is a big ask, she might also have what it takes to compete. Gold Dragon Queen rounds out the field, with her best recent effort a third-place finish in the Providencia Stakes before sixth- and 12th-place efforts.

Spendarella has always been cut out to be an exceptional horse on the grass, being a daughter of 2014 Breeders’ Cup Mile winner Karakontie. She won the first three races of her career, one month apart in February, March, and April of this year, the latter two stakes races in which she earned 104 and 102 Equibase Speed Figures, respectively, which are exceptional for a 3-year-old filly that early in the year. In the first of the two stakes wins, Spendarella led from start to finish beating 10 other horses in the Herecomesthebride Stakes then one month later she relaxed off the pace to draw off late in the Appalachian Stakes. Sent to England for the prestigious Coronation Stakes, Spendarella wasn’t disgraced one bit when second behind the strong four-length winner, gamely holding second by a nose and earning a Del Mar Oaks field-high 112 figure. She’s been working very well since her return and jockey Tyler Gaffalione, who was aboard for the Appalachian, has the mount so we can expect a top effort good enough to win.

Txope is the biggest threat to Spendarella based on her win when last seen (in June) winning the German One Thousand Guineas and earning a 111 speed figure right there with the 112 Spendarella earned in the Coronation Stakes. She’s now run 12 times, finishing first or second in eight of those, the last eight being stakes races as well. In training at Del Mar since the end of July, Txope has put in three consistent workouts on the Del Mar turf and appears to be handling it well. As such, she should be in a great position in the last quarter-mile and has a big shot to add to her record in this year’s Del Mar Oaks.

2022-08-19
Previous Post: Phil Hellmuth, Mike Matusow, Chance Kornuth to Headline ‘Live at the Bike’ Next Week
Next Post: MGM Resorts Foundation gives out $2M in grants to non-profits in jurisdictions where the company operates