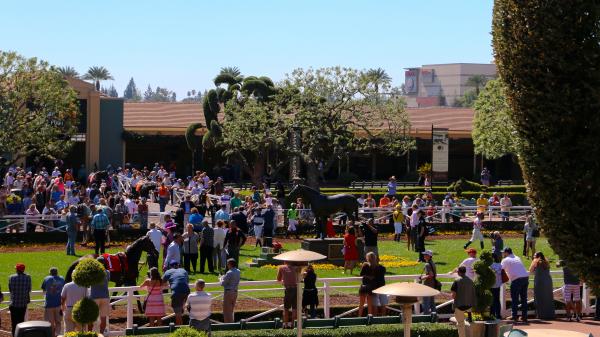 Pairing a Longshot with Cave Rock in American Pharoah Stakes

Saturday’s $300,000, Grade 1 American Pharoah Stakes at Santa Anita Park is the premier West Coast prep for the FanDuel Breeders’ Cup Juvenile, which will be held this year on Nov. 4 at Keeneland. Five 2-year-olds who’ve won the American Pharoah have trained on to win the Juvenile over the past 39 years, and all five were named champion 2-year-old male at year’s end. That includes last year’s winner, Corniche.

This race was named the Norfolk Stakes and then the FrontRunner Stakes before being renamed in 2018 to honor 2014 race winner American Pharoah, who a year later won the Triple Crown and Breeders’ Cup Classic and was named Horse of the Year. American Pharoah, along with Corniche, are two of 10 total winners of this race trained by Hall of Famer Bob Baffert, and Baffert has four of the eight starters entered in Saturday’s 53rd running of the American Pharoah, including 4-5 morning-line favorite Cave Rock (#5), who’s unbeaten in two starts and won the Grade 1 Runhappy Del Mar Futurity Sept. 11 by a comfortable 5 ¼ lengths.

Can Cave Rock be beaten? Of course he can – this is a race for 2-year-olds, which means that any of these contenders is eligible to improve dramatically as they continue maturing and gain experience on the racetrack. That being said, Cave Rock has one big advantage over his seven opponents coming into Saturday’s race: he has won both of his career races when leading at every point of call and appears to be the controlling speed in the American Pharoah as well. The son of late sire Arrogate (who won the 2016 Breeders’ Cup Classic for Baffert) was bumped in both of those starts – a 6 ½-furlong maiden race on Aug. 13 at Del Mar and then the seven-furlong Del Mar Futurity – but recovered quickly and was not challenged thereafter. Cave Rock will be stretching out to two turns for the 1 1/16-mile American Pharoah, but he should be able to handle an extra 1 ½ furlongs under rising star jockey Juan Hernandez.

So if the big favorite looks like the most probable winner, what’s the best strategy to make some money in the American Pharoah? As mentioned, Baffert has three other horses entered in the American Pharoah, and each figures to get a long look from horseplayers due to their association with the trainer. Hejazi (#8) should draw a lot of interest as the 5-2 second choice on the morning line due to his $3.55 million price tag and his solid runner-up effort in his last start, when he was defeated by 1 ¼ lengths in a 5 ½-furlong maiden race Sept. 10 at Del Mar by Baffert-trained Speed Boat Beach, who subsequently won the Speakeasy Stakes on turf last weekend. Hejazi has finished second in both of his starts but may be ready to improve significantly as he also tries two turns for the first time: he’s by Bernardini and out of a Medaglia d’Oro mare and blitzed a five-furlong workout at Santa Anita in :59.40 on Oct. 1.

The other two Baffert trainees look promising as well. National Treasure (#6) won his debut at Del Mar Sept. 3 in game fashion by taking early pace pressure and then holding off yet another Baffert trainee, Massimo, in the final strides. Massimo ran a disappointing second in his subsequent start against only four opponents, but National Treasure finished well from a visual perspective in his debut, has a good two-turn pedigree as a son of Quality Road and also out of a Medaglia d’Oro mare, and the 6-1 choice removes blinkers for Saturday’s race. Making that equipment change over the past year results in a 50% win rate for Baffert.

The last of the quartet, Gandolfini (#1), is the horse I’ll use to hopefully turn a decent profit by playing a couple of trifectas with the 12-1 shot in first and second along with Cave Rock. This chestnut colt comes into the American Pharoah off of a maiden win going a two-turn mile at Los Alamitos on Sept. 17. Favored at 9-10 odds, Gandoflini was drawn to the outside post position in the nine-horse field and raced four wide through the first turn, the backstretch, and then in the far turn. He stayed close to the pace, however, and took a short lead in early stretch while still racing wide and with the third betting choice rallying to his inside. That opponent drew closer and bumped Gandolfini in the final sixteenth, but he responded and won by a half-length. He earned an Equibase Speed Figure of 84 for that debut win, which is lower than all three of the horses discussed above, but I think he has the potential to improve and spice up the exotic payoffs for three reasons.

First, Gandolfini’s posted two sharp workouts at Santa Anita since his debut win – most recently a five-furlong drill in :59.40 on Oct. 3. Second, this son of 2018 Triple Crown winner Justify has already won going two turns and did not fold when challenged in deep stretch. And third, Gandolfini raced wide throughout in his debut but still prevailed, and he’s drawn to the inside Saturday. Jockey Edwin Maldonado just won the Awesome Again Stakes for Baffert on the front end last weekend at Santa Anita, and I’m expecting him to get Gandolfini in a much better position and saving ground while stalking the pace in the American Pharoah.

And if that’s not enough – “The Sopranos” was a great show, wasn’t it? “Woke Up This Mornin’ and Got Myself” … a live longshot in the American Pharoah.

Betting strategy on a $30 Budget

What to say at the betting windows:

What to say at the betting windows: