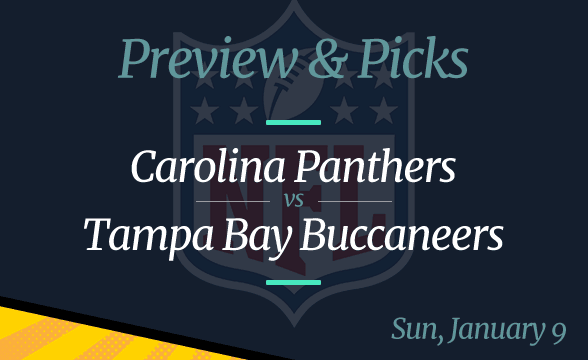 For the Carolina Panthers (5-11), the season is over. Whatever happens in Week 18, they’re not going to make the playoffs. For the Tampa Bay Buccaneers (12-4), it’s just the opposite. They’ve already locked a place in the postseason, the only question is who will they play in the first round of the playoffs?

The Bucs are currently sitting in the #3 position in the NFC Rankings, which means that if the season ended today, they’d take on the #6 seed. However, if they win in Week 18, there’s a chance they could finish in the #2 position.

For that to happen, they’d need to see the Los Angeles Rams lose to the San Francisco 49ers, which doesn’t seem like a too crazy scenario given the fact that the Niners need a win to get to the postseason.

All odds are per FanDuel as of January 5.

The Bucs’ Getting Ready for the Playoffs

The biggest news from the Bucs’ roster is that wide receiver Antonio Brown is no longer their player. After faking a COVID certificate, Brown was suspended by the league for three games. Then, when he returned, we saw him having a sort of break-down, leaving the field during the game with the New York Jets.

The Bucs decided to part way with him, which may seem like horrible news now that it’s almost the time for the playoffs. However, here are some good news coming from Tampa’s locker room. Several of their key men are coming back from an injury, including Leonard Fournette, Lavonte David, Jason Pierre-Paul, and Shaquil Barrett.

As the playoffs are near, the Bucs probably aren’t willing to risk further injuries, which is why they will probably go easy on the Panthers on Sunday. Still, they aren’t going to give up on that game as winning it could lift them one place higher in the rankings, which would mean getting an easier opponent in the first round of the playoffs.

Can Panthers Finish the Season with a Win?

November 14, 2021 – that’s when the Panthers last won a game. Since then, they lost six straight games, getting knocked out of the playoff race along the way. That said, they literally have nothing to fight for in Week 18 apart from their pride.

The bad news is that the Panthers are 0-3 against the Bucs since the arrival of Tom Brady. The legendary quarterback threw for a total of four touchdowns, as well as scored one running TD in those three games. Thanks to his output, the Bucs were able to score 109 points in total, which accounts for 36.33 points per game. It’s only logical to expect something similar to happen on Sunday.

Picks: Tampa Bay Buccaneers to win and cover the spread; over 41.5 points will probably hit